Both a visual artist and musician, Soni Irawan’s chaotic compositions of colour, emotion, and innocent spontaneity showcase individualism like never before. 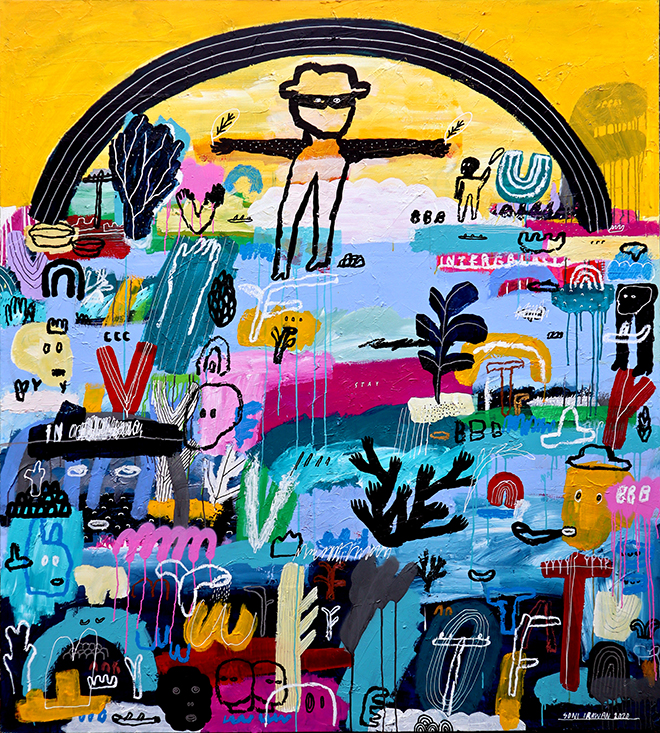 Born on 15 January 1975, Soni Irawan is the revered founder of Jogjakarta experimental band Seek Six Sick, which has since heavily influenced the spirit and energy of his art. Engulfing each canvas in an array of spontaneous strokes, sketchy figures and cut out pieces, Soni Irawan has long used his art to express his underlying interest in capturing the spirit of human survival in everyday life. 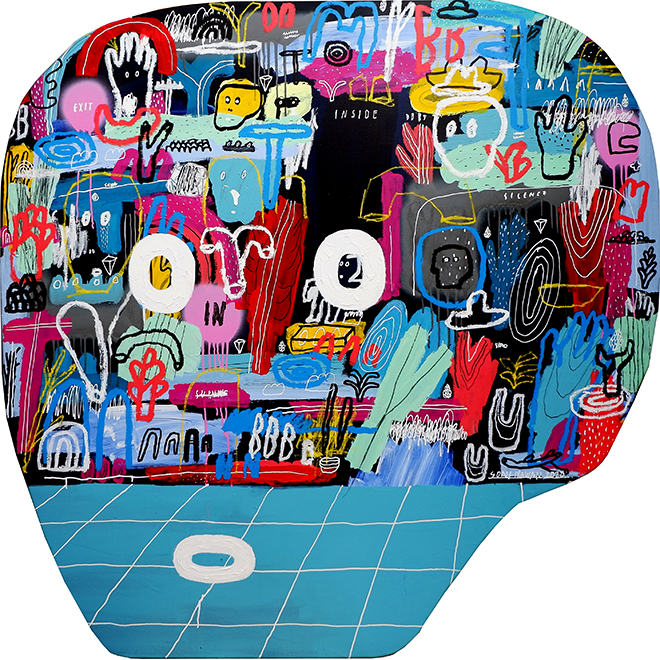 Born in 1975, You grew up in Yogyakarta, the art capital of Indonesia! You then graduated from the Indonesian Art Institute also located in Yogyakarta. Tell us about your first steps as an artist?

I attended the Indonesian Art Institute of Yogyakarta in 1993, to major in printmaking under the Fine Arts Faculty.

In the college, students of the printmaking major felt that they would not achieve anything or have a future because there were not many role models of printmaking artists in Indonesia. It doesn’t mean that there were no significant artworks in printmaking at that time, it just so-happened that the people of Indonesia were not able to fully appreciate printmaking artworks. Common people used to have no idea about printmaking, or how it is actually a part of fine arts. What they knew of artwork were sculptures and paintings. Hence, many of the printmaking graduates ended up working in publishing and advertising companies.

Throughout college, we were taught about standard and conventional printmaking, in which there were strict rules in creating artworks. There were many standards or rules that had to be obeyed in order for our work to be recognized as printmaking artworks.

Due to such conditions, most of the students expressed their creativity on the streets, by making mural paintings. Here (on the streets), we were able to freely express ourselves in creating our artworks without worrying about printmaking rules. We could express anything we wanted regardless the latest art concepts.

To me, besides mural painting, playing music in a band group has also become a medium to express myself.

In 2002, I decided to join Philip Morris ASEAN Art Awards. I thought that the competition was really good, as it accepted any type of artwork. Previous competitions had limited the participants to only present paintings. Philip Morris ASEAN Art Awards was probably the only prestigious art competition in Southeast Asia at that time. I used conventional graphic technique combined with stencil art that I got from street art. The competition had brought a satisfying result to me, since I was one of the best 5 participants, along with the late S. Teddy D, Ay Tjoe Christy, Ibrahim, and Zulkarnaini. Then, I joined the next step in Southeast Asia in 2003. That was I guess the initial steps of my art career. 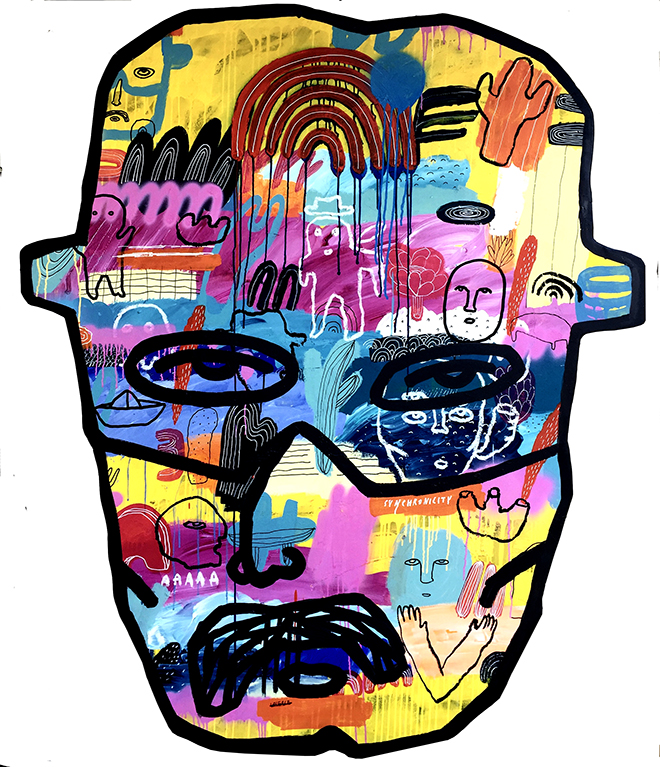 You are a musician and one of the founders of a Yogyakarta experimental band Seek Six Sick. Your art is greatly influenced by the spirit and energy of rock music. Tell us about these jam sessions with your group and as a painter? Do you like how your art seems to mirror the “chaotic composition” of Seek Six Sick’s music?

My greatest inspiration is street art and the music I play: noise rock. I started playing music before creating artworks, and I learned a lot in discovering the process of making works that I loved in playing music. I want to paint just like I play my music, just like creating chaotic composition. Basically, my music making process is a jam session, it spontaneously fills each other’s gaps and responds to existing sounds, based on the preset nuances and themes we had decided on prior to the session.

I’ve tried to adapt these practices in creating my artworks/paintings and now I have a new band project, named Sakarin, that just released its first album just before the pandemic. Available now on all streaming platforms, such as ITunes music, Spotify, and Bandcamp under the label of Dugtrax Record. 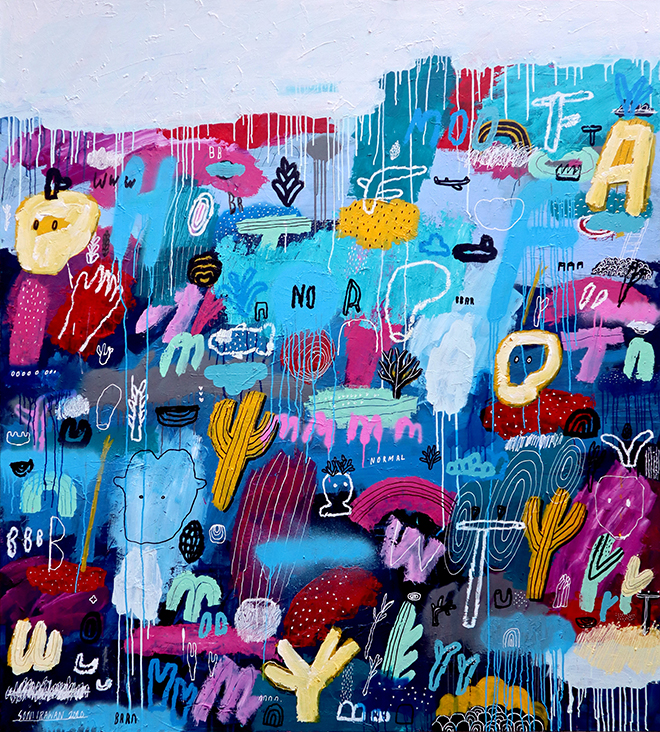 Your canvases are filled with spontaneous strokes, sketchy figures and cut out pieces, with the medium of oil bars chosen for their characteristic feel of roughness and boldness. How would you describe your style?

My canvases are filled with spontaneous strokes, rough or sketchy figures, and cut out pieces. I used oil bar as a media so that the characters can be formed rough and bold, because I want to treat my brush / painting tools as if I play my guitar. All of them are visualisations of the sounds and characters of me playing guitar: spontaneous, rough and innocent. The oil bar lines play as thick and rough guitar distortion, while the melted paint being allowed to fall is like the sound of guitar feedback which comes out without being covered. 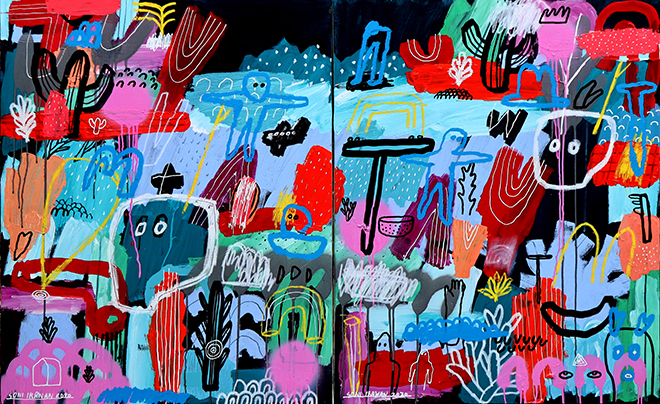 Has Jean-Michel Basquiat been an important reference for you when maturing as an artist?

I started studying at the university in 1993. At that time, handphones were not popular yet. Let alone smartphones and sophisticated internet. References of artworks were completely limited. There were only books at the campus library, or sometimes friends lent me some reference books. Basquiat became an obligatory reference for students who were fond of street art, raw art, and outsider art. Moreover, after Basquiat the movie (1996) was released, I felt like I found an idol or hero who fit my art taste. In my opinion, Basquiat has opened my eyes and become an initial reference in the process of maturing me as an artist. 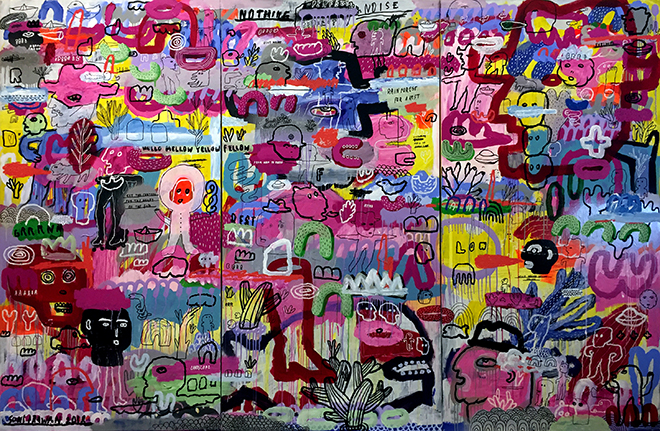 You have been silent for a few years. Then you came back loud on the art scene. What is the most challenging part about creating your artwork?

After the Philip Morris Art Awards, I worked as a graphic designer up till the mid 2000s, because street art and underground music were not popular and they could not be regarded as professions.

When I was bored with the office routine, my old friend, Heri Pemad (who later became the founder of ArtJog) suddenly asked about my painting artworks. I didn’t paint on canvases a lot, since I loved painting on walls much more than on canvases. He offered to sell my artworks and it turned out that my paintings were all sold. Then, he invited me to become a professional artist, making my artworks a livelihood. He even doubled-up as a manager in the beginning of my career. I finally decided to stop working as a graphic designer and became a full time artist.

All of my paintings are made based on spontaneity. The challenge is that I cannot expect the final result and I always try my best to further my progress, ensuring that every new piece is different from the previous artworks I have created. 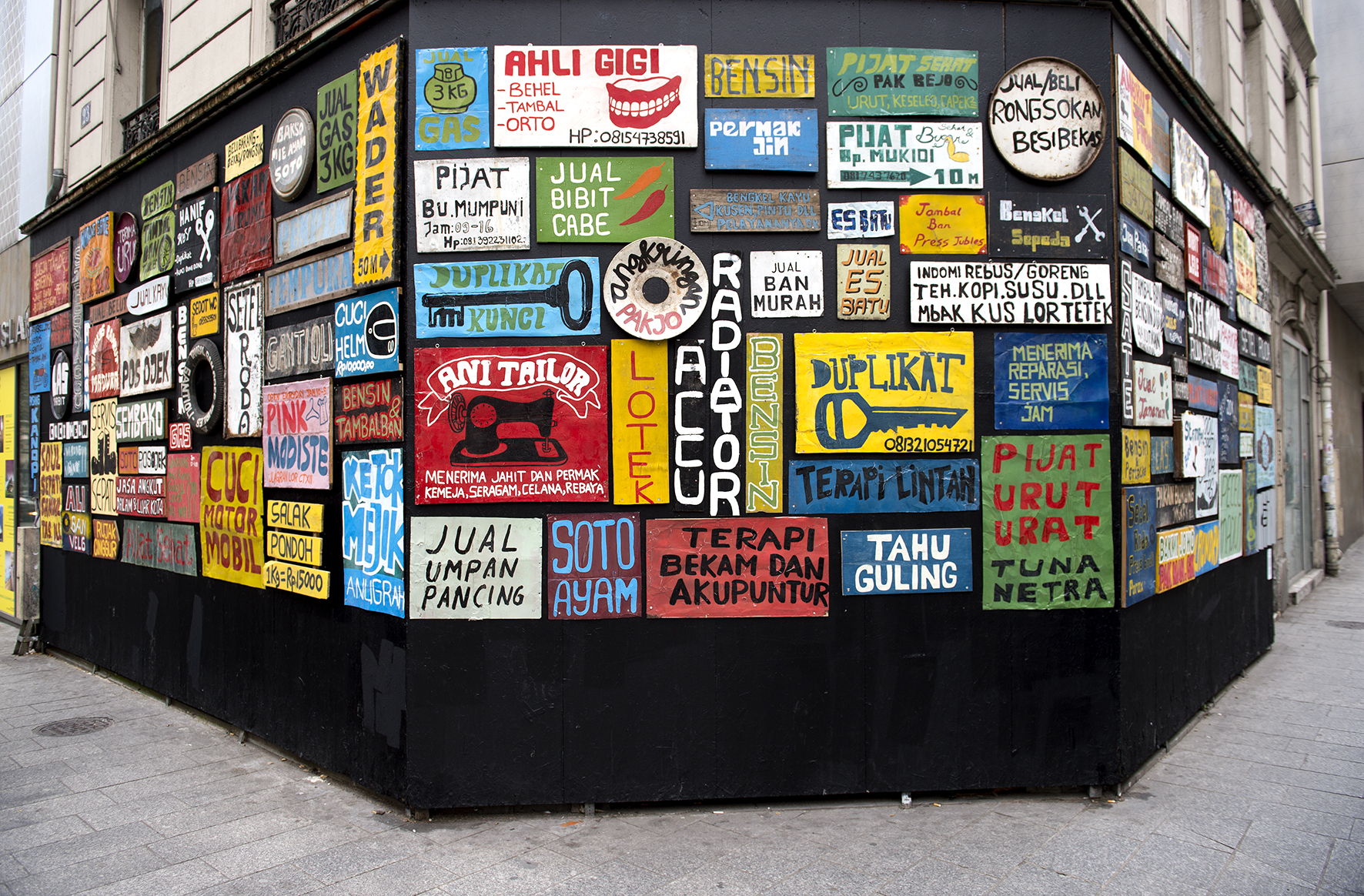 Today, you have collectors from all around the world. You are referenced amongst the leading global art websites. What does such recognition inspire in you?

Yes, indeed. Such recognition has of course inspired me. It has made me more confident in creating artworks, and reaffirmed that being an artist is the best choice that I have made. 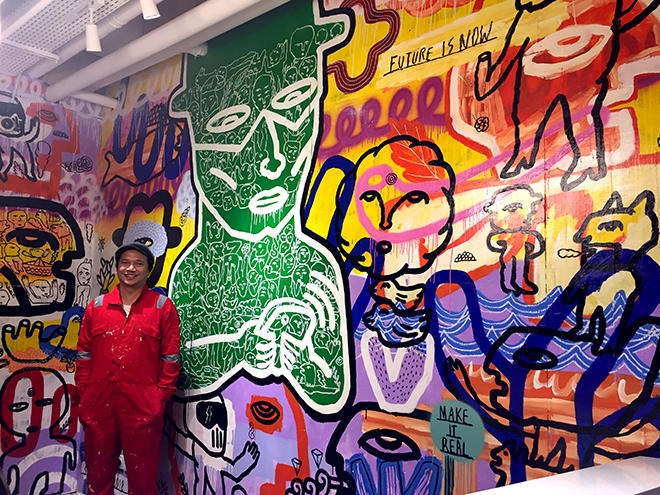 Self portrait at mural project in Gojek Headquarters, Jakarta, 2018.

How do you view the current art scene in Indonesia? How important is the space given to artists in modern Indonesian society?

The art scene in Indonesia has progressively developed over the last 10 years, because cultural and technological development has not only made it easier to connect but has also created a substantial pool of young and talented next-generation artists.

Artists should be able to be filters of progressive cultural and information technology. Artists must be able to drive or keep the human mindset to stay cultured. Here in Jogja, local artists are actively participating individually or in groups to help solve the social problems around them. As an example, many artists helped the affected artists through some social movements in the beginning of the pandemic. 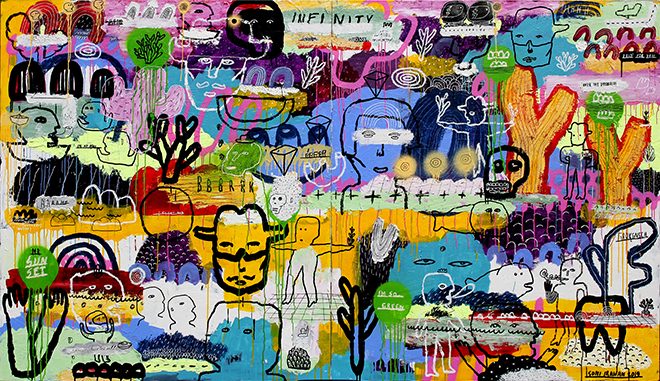 I was supposed to have a solo exhibition in Bali this year, but it has been postponed due to the coronavirus. The exhibition will be delayed until the situation is more conducive. I hope that it can be conducted next year.

My work is currently available for viewing and enquiry on Instagram. 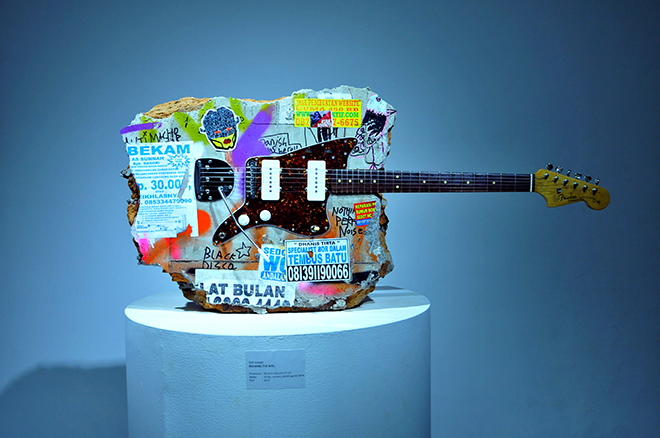 I would name the late S.Teddy.D. He was my old friend, and college senior. He majored in painting and was an active, smart and critical student. My first encounter with him was when there was a campus assignment exhibition. He came to me and asked “Is this your artwork?” and then praised me by saying “You have a great artwork, let’s exchange (our artworks)”. I wondered how he could be enthusiastic and spontaneous at the same time.

The Philip Morris event made us closer, because we spent time together during the exhibition tour in some cities and during the final round in Southeast Asia. We even stayed at the same hotel. After we both have kids, they became best friends and I often visited his house. In each meeting, he always asked me about the progress of my artworks. He always gave his suggestions and critics. It seemed that there was only art in his mind, and he would always be enthusiastic in discussing the development of arts. I finally made him an official consultant of my work. He always motivated me to explore my music and express it in my artwork. He told me that since I am a musician who is also a visual artist, I should be able to express, paint or symbolize my music. According to Teddy, I have the advantage of being both a musician and an artist, so my music and artworks should run together. Unfortunately, Teddy passed away on the opening night of ArtJog in 2016. I really lost my best friend and mentor.