It’s only a matter of time before everyone gets to know the names of these 10 promising artists. 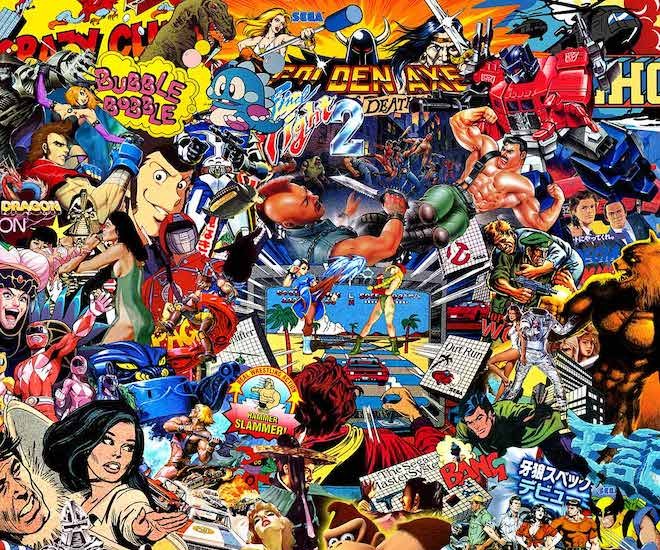 With sixty per cent of the earth’s population living in Asia, it’s no wonder that there is an ever-growing global appetite for Asian art, especially since the creative habitants within have developed idiosyncrasies in their artistic languages that would soon set them up as contemporary canons. In an assurance to the world that the easter creative output will only increase by the decade, here are 10 Asian artists who exhibit the propensity for carrying their own weight against the rest of the world. 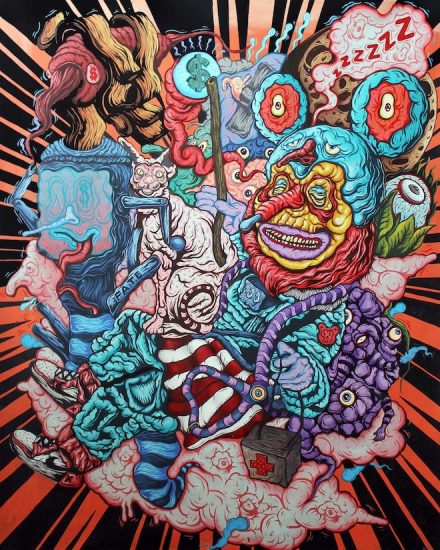 Regarded one of the most uncompromising and hard-hitting artists of his generation, Shafiq Nordin is anything but vanilla. Leaving the depictions of victims and casualties of geopolitical games to his less imaginative counterparts, this Malaysian artist takes no prisoners when illustrating certain nefarious forces and their evil capitalist agendas as the skinless muscle-bound beasts they are. Drawing specific attention to the monstrous nature of humanity’s imperialist ambitions and insatiable greed, Shafiq Nordin is revered for his strong imagery, unique style, coarse outlines, and well-composed satire. The subject matter of his works, depending on the messages that he intends on, mainly focus on surreal interflowing animals. Earlier on in his career, there were many artists who worked with human figures. To set himself apart, Shafiq uses these animals became his main subjects. In this way, his messages will not be too direct to the viewers. Each animal has its own character that can be analogical to the human condition too. 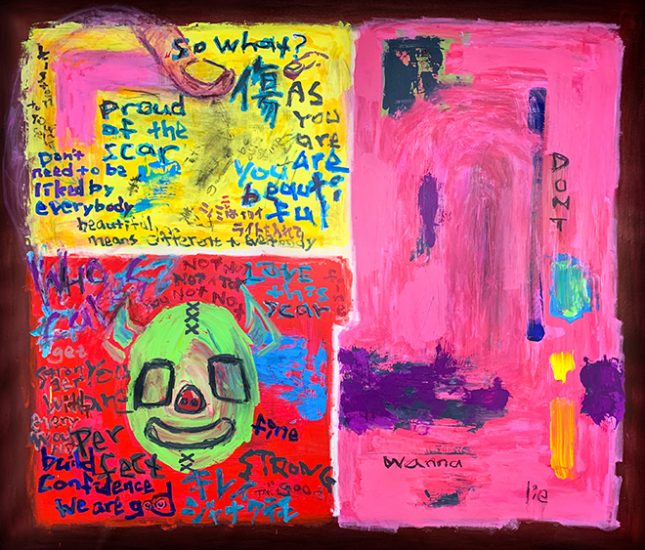 “The nail that sticks out gets hammered in,” and Japanese artist, Takashi Hara aims to be that nail which puts a dent in the hammer. When we catch glimpses of Takashi Hara’s masterpieces, we think absolutely nothing about traditional Japanese Calligraphy, or Shodo, which loosely translates to “the way of writing”. Yet, it is just that age-old art form that the 37-year-old Japanese artist’s works invoke in both essence and execution that encapsulate the style’s energy, brush strokes, a fusion of intentional and accidental texture, and most importantly, texts.

After making the decision to break out of his mould in artmaking, colours are what separate Takashi’s style from Shodo, the present from the past. Some of his works are presented with colours and brush strokes as the subjects in themselves rather than figurative forms. Takashi adores the vibrant energy colours can evoke within his pieces. Also, his stints in multiple countries had him elucidated to the fact that remaining within the premise of a single art style will not get the artist very far in his career, so he began exploring with other means and mediums, such as to abandon the paintbrush and smear pigments from his fingers, to keep his artforms eclectic and relevant to the ever-shifting landscapes of society today. Malleable and wavering, the French would call his art style “Punk and Zen Art”. 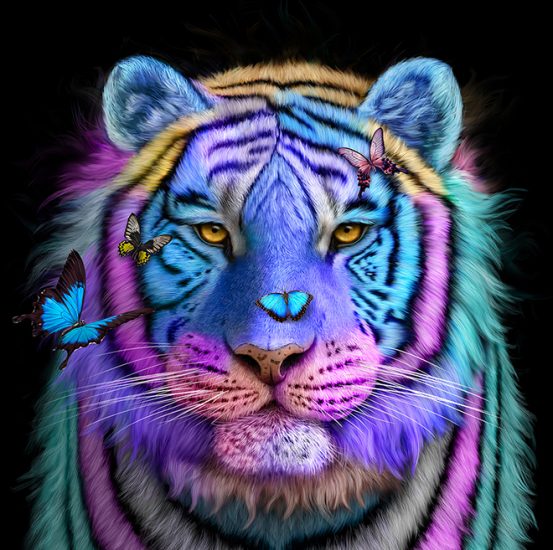 Capturing his every subject in their most pure and vulnerable form, South Korean artist Koh Sang Woo uses negative films to integrate photography, performance, and painting in an effort to present the audience with the opportunity to see the world in reverse and reconsider the way in which we look at others and understand ourselves. Most of his works start as a performance. Layering pieces, colours, movements, and finally cementing the essence as a still shot. As an artist, Koh believes in defending and standing for what he believes in. After all, we would not have great artists in any field if they did not fight to be heard while pressing on to continue evolving in society. Whenever he feels the need to voice his thoughts and opinions, he creates a portrait where he can find solace in the safety of his mind. Ultimately, Koh works are the manifestations of his inner being who yearns to be set free and immortalised on the canvas as the negative of a film still. 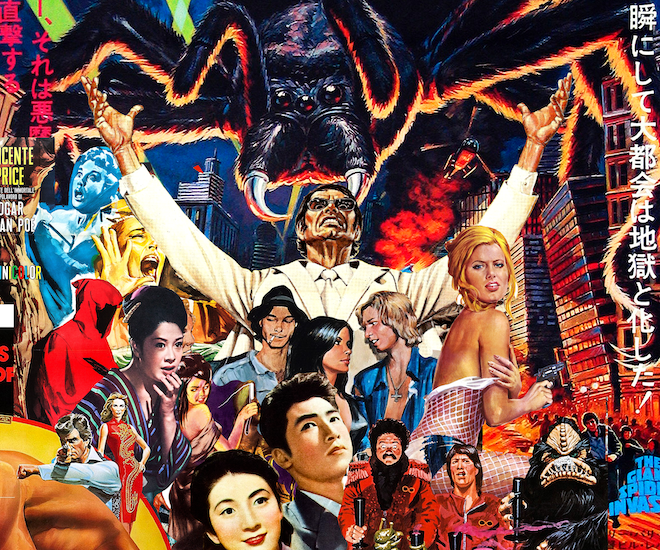 Steve Lawler, better known as Mojoko, was born in Iran, raised in Hong Kong, and educated in Europe. Catapulting through the industry as an artist, designer, and creative director, Mojoko established the Kult Magazine, Gallery and Studio and rapidly built a reputation for his diversified career in curation, installation, interactive design, and fine art. Strongly inspired by B-movies, trash TV, and alternative culture, Mojoko found the alternative and unorthodox more exciting and unusual. His art all contains an element of collage. Opposites attract, and he often forces a connection between two separate entities to interplay and intertwine with each other, resulting in compositions that are shocking yet compelling for his audiences who would, more often than not, quickly recognise the whimsical elements from the mid-1900s. 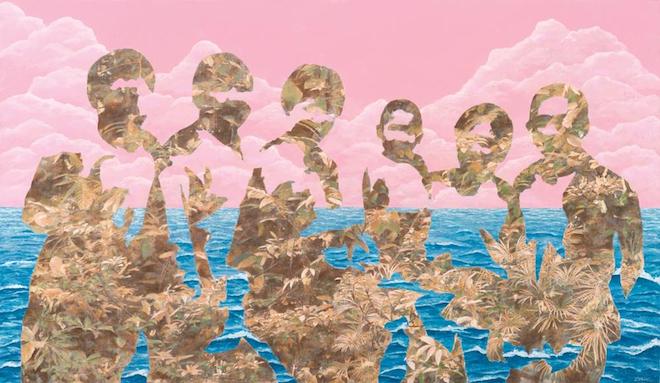 Growing up with his grandparents in the forested environment of Sabah, Malaysia, Chok’s childhood space of lush greenery and picturesque sceneries are memories of a paradise lost, and in these memories is the nostalgia the is comprised within his singular theme of past, present, and future. The forest is the paradise in which Chok is most attuned to navigating through, unlike the city where he resides in now. Following the deteriorating family ties after the passing of his grandmother, Chok paints and carves to emphasise the connection between memories and unfamiliarity whilst using botanicals and floras as the perfect analogy. 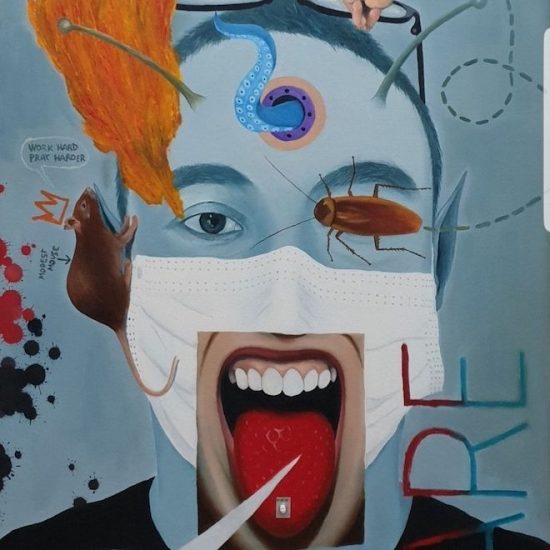 “Art for me is just like a sport. It’s a playful thing.” Darel’s exuberant take on art has him constantly seeking out new styles and technique to push his skills to greater heights. Fun has always been the overarching theme in all his works, and surrealism proved to be the perfect match to bringing out his ideas on the canvases. Vivid and whimsical, his subjects are narratives in and of themselves that prompt his viewers to uncover and discover what lie beneath the collage-like composition. 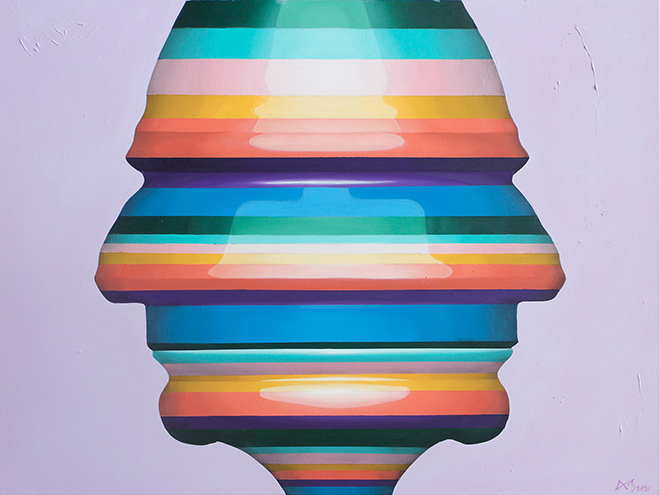 Heavily influenced by the creative atmosphere provided by his mother who worked with colourful textiles and his father who owned an outdoor advertising agency, Kos Cos had his artistic eye all set for him to take on the world of advertising. Where he works at, Hong Kong was a major Art Hub of the East and also an inspiration launch pad for the young artist as he grew his fondness for portrait paintings. He explains that faces bear the identity of the people who wear them – emotions, moods, character information – they display a great deal of information about people. Initially starting out with charcoal, he later turned to oil and covered the charcoal marks with paint.  His “Shape of a Thought” series best showcase his masterful command over the medium. As summarised by him, “It’s an idea based on a story of a thought.” Kos Cos’ experimental potential also has him combining several mediums to create lively works that frame different portions of his compositions into focus. Changes in his techniques will, more often than not, be reliant on the mediums he employs. 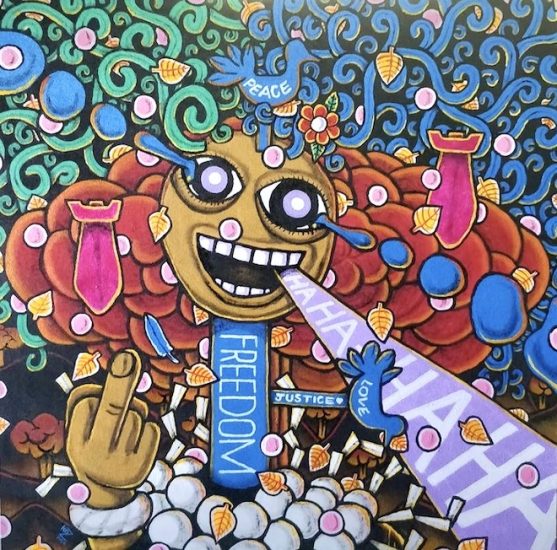 Zahkung Hkawng Gyung, or Ko Z, belongs to the Kachin ethnic minority who lives in the northernmost State of Myanmar. His respect for nature is a heritage from his ancestors and hails from his childhood and ethnic origins. As such, natural materials are often employed in his installation works and performance pieces to bring greater awareness to environmental issues. Flat colours with fractal backgrounds are characteristic of his painting style. Ko Z attains liberation in his technique by challenging himself to paint directly on the canvas without prior sketches, and this results in organic pieces which are uniquely reminiscent of the artist himself. 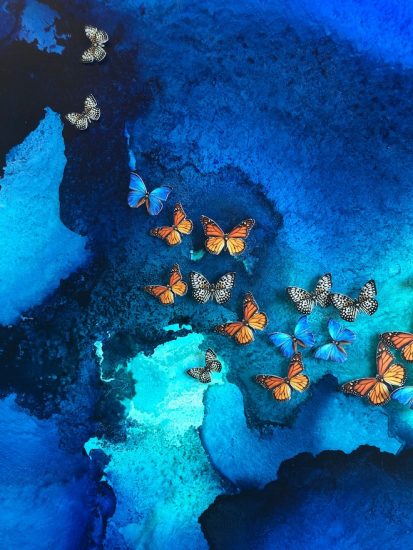 Tunku Khalsom is revered for her work which exudes fluidity and stunning colour, whilst embracing the concepts of ‘Life, Love, and Change’. She incorporates bright and bold colours which evoke different emotions, whilst having the power to alter mood and thought. Butterflies, which are a recurring feature in her works, are immediately symbolic of change and metamorphosis, yet they hide an even more macabre side to their grace and beauty. Tunku revels in this unexpected dissonance and adopts its grit into her already chaotic layout of colours bleeding into one another. For her, obsession with colours meant that the brighter and the more colourful, the better, yet she has still managed to balance that out with the darker side of things, therefore creating sophisticated pieces which are vibrant yet haunting for viewers who care for a slice of gloom within the sunshine. 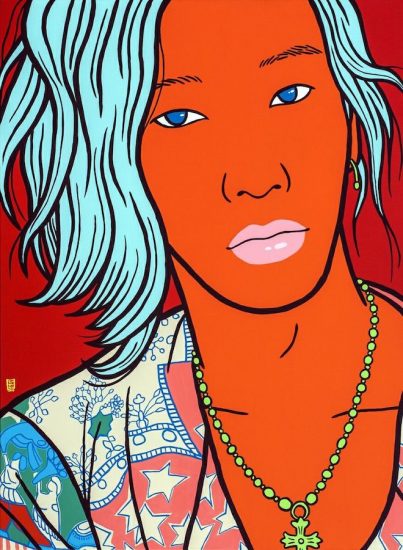 Flat colours and bold outlines – elements of a comic strip design have been adapted by South Korean artist Yoon Giwon and presented upon the canvas. Easily palatable by anyone who enjoys deep and vivid hues, Yoon’s paintings are centred around the idea of relationships. In an effort to bring forth his idea of communication, he paints pop art portraits of people in direct, confrontational gaze with the viewers, as if ready to strike up a conversation at any moment the gazes meet, recreating a history that is etched in the birth of every new relationship created.

By now, it is apparent that the East has shifted its artistic weight into the spotlight of global recognition, and any astute collector would have a selection dedicated to the promising showcase of the Asian talent stage that constantly bursts through new grounds.