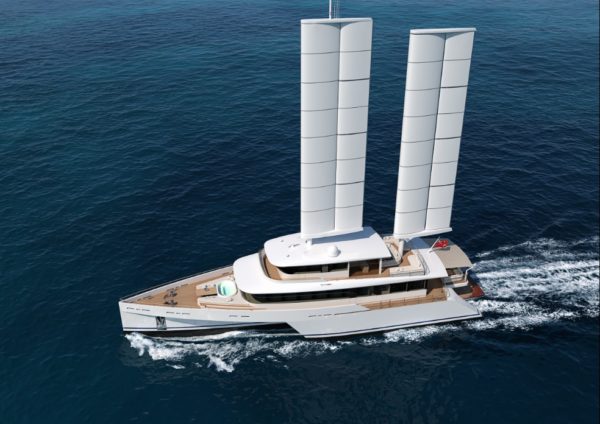 The main deck features the saloon and dining area, five guest cabins, aft deck and foredeck, while the upper deck has outdoor and covered social areas plus the wheelhouse and Captain’s cabin. The lower deck has an aft garage and beach club, but is otherwise dedicated to crew, while the bottom deck houses the technical areas.

Pajot, the legendary French sailor who has two decades of experience as a yacht broker, believes the design of the 148-footer, which has a broad beam of 12.3m (40ft), provides an answer for sailors who worry about the complexity of handling larger yachts.

“This one-of-a-kind yacht is the perfect synergy between long-range ocean cruising and easy day sailing,” said Pajot, a former America’s Cup skipper and a 1972 Olympic silver medallist (Flying Dutchman) with his elder brother Yves, one of the co-founders of Fountaine Pajot. 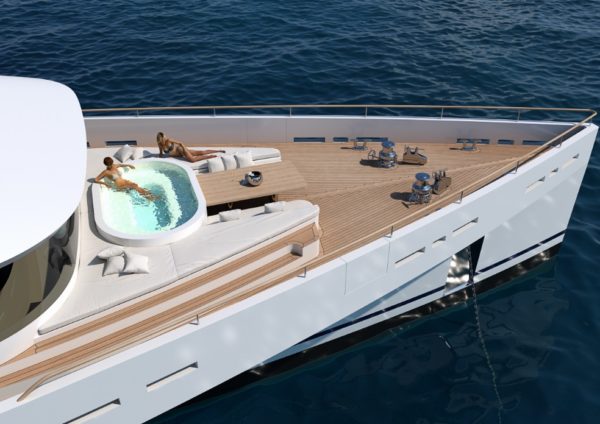 Komorebi features a jacuzzi on its innovative foredeck

“I have come to the conclusion that the majority of yacht owners choose motor yachts over sailing vessels, even though they still have a tremendous passion for sailing. The common obstacles are the complex sailing expertise that’s needed, discomfort from heeling at sea, and low manoeuvrability and speed.”

Pajot believes VPLP has designed a yacht that addresses all such concerns. The stabilised monohull or trimaran design dramatically reduces heeling and rolling, while the yacht is easy to sail because it’s entirely automated.

Inspired by VPLP’s work in the America’s Cup, the patented Oceanwings rig is a two-element wingsail, which is not only automated but also furlable and reefable. Self-supporting and rotating 360 degrees, Oceanwings adapts its angle of incidence to the yacht’s point of sail for greater propulsion, with power managed by trimming camber and twist.

“We’re offering a wind propulsion system that’s reliable, simple and automated,” Van Peteghem explained. “Not only does it provide exceptional control but it’s also efficient to the point of halving the surface area required to propel a vessel under conventional sail.” 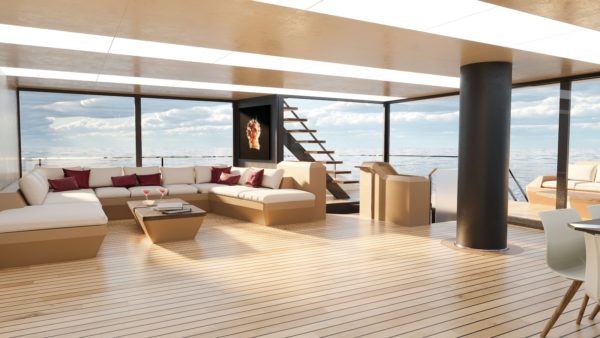 The yacht also offers an electric hybrid solution, so is energy efficient, with low fuel consumption and emissions. In fact, the hybrid solution combines the force of the wind with traditional and electric propulsion, so has been termed a ‘double hybrid’ system and has three operating modes.

Under 10 knots of wind, propulsion is provided by the combustion engines, which can power the vessel up to 15 knots. From 10-17 knots of wind, the boat can travel in hybrid mode and silence at a minimum speed of 12 knots using the power of the wind and the electric motors.

Above 17 knots of wind, Komorebi sails at 12 knots using only her wings. “This low-impact yacht is capable of cruising the globe,” Pajot added. “We are now in the process of entering prototype production and are looking for enthusiastic and visionary partners to build the green technology yacht for future generations.”