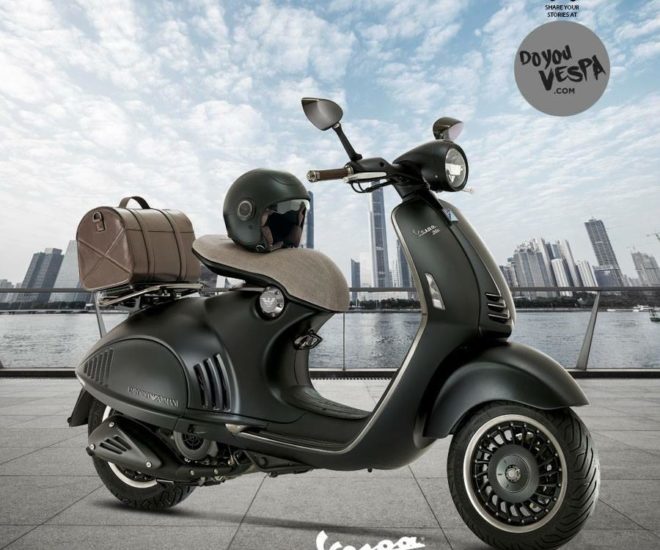 EMPORIO ARMANI has teamed up with Italian manufacturer Piaggio to launch the Vespa 946 Emporio Armani.

Meanwhile the number 946 refers to 1946, the year the Vespa, the world’s first moped scooter, was unveiled.

Like the clothing lines associated with the Emporio Armani label, the bike’s external appearance is chic and subtle. The color palette is a mix of grey and green earth tones and thanks to a clever galvanizing treatment the body panels take on a satin yet solid color finish that allows the green to shine through the darker grey tones.

Other external touches that mark the bike out as a special edition include the Emporio Armani Eagle logo above the headlight and subtle Armani branding on the sides.

The scooter itself is based externally on the classic Vespa, but its internal components are bang up to date. The engine is four-stroke, not two-stroke, and has aluminum cylinder heads. The front wheel has a double disc brake, the vehicle is smartphone compatible via Bluetooth, it’s got a digital dash panel and it comes with ABS as standard.

The saddle is premium stitched brown leather and Armani has a range of compatible clothing planned, news about which will be made public at a later date. Likewise, Piaggio has confirmed that when it officially launches, the bike will be offered with a choice of tie-ins such as panniers.

As for the scooter itself, it is being produced in ‘strictly limited numbers’, each of which will be individually numbered and will be going on sale later this month. Prices are yet to be confirmed, but expect the Vespa 946 Emporio Armani to retail for €13,000 without accessories.