The British car manufacturer’s hypercar goes into uncharted territory with its colossal power and cutting-edge technology. 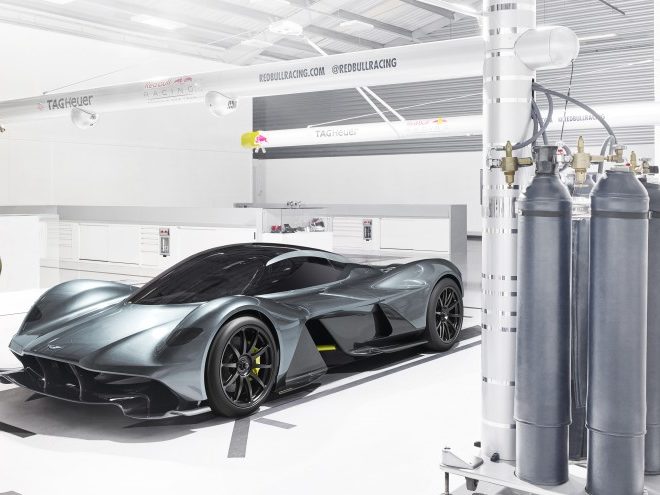 “Are we already in 2050?” You might ask this after laying eyes on the AM-RB 001. No, we’re still only halfway through 2016, but we don’t blame you for wondering – the latest project between Aston Martin and Red Bull is a futuristic-looking beast that may soon turn up at a highway near you. Yes, this car is reportedly road-legal. Co-designed by 10-time Formula One Championship designer Adrian Newey – who’s currently employed by Red Bull Racing – and Marek Reichman, Aston Martin’s chief creative officer, the hypercar is projected to serve up a blistering 1,000 bhp, essentially rendering it a two-seated road rocket. So, as other commentators have noted, this is an F1 car that can legally pass you on the highway, and pass you it will…

This pace is made possible by a brand-new, ultra-compact naturally-aspirated V12 engine, which will power the 1,000kg car with a projected weight-to-power ration of 1:1 (read: one bhp per kilogram), delivering behemoth power that may well propel the car around Silverstone faster than a Formula One car. This magical ratio has only ever been achieved in another car – the Koenigsegg One:1 hypercar. Aston Martin also promises its performance will leave last year’s trinity of McLaren P1, LaFerrari and Porsche 918 in its dust.

A word about the AM-RB 001’s 1,000kg weight. Basically, Newey’s first road-going design is lighter than a Hyundai Elantra, for example, which has a published kerb-weight of up to 1,350kg with just 126 bhp. Take a moment and do the math on the weight-to-power ratio and then realize that the Elantra is of course road-legal. Having these two cars share the same road is like putting Jesse Eisenberg into a UFC ring with Conor McGregor. Newey explains: “I want it (the AM-RB 001) to be small and light, with a very responsive powertrain. The aerodynamics don’t necessarily make it more pleasurable to drive, but they do have the effect of making you think you are going much faster than you thought possible. We looked at all sorts of configurations – V6 twin-turbocharged, V8 single turbo – but in the end it had to be a V12 to get the sort of power output we were after.” To make the ride less harrowing than it already seems to be, Newey will likely implement active suspension to counterbalance the immense downforce at high speeds. However, Newey insists that his first ever road-legal car will be a comfortable drive. “We’re talking also about the driving experience, not just the statistics. How you are feeling in the car, taking pleasure in driving it, feeling involved in it,” he said.

A track version of the AM-RB 001 will also be made in a limited 25 examples, and will feature modifications such as bigger wings and diffusers, wider tires and a stripped cabin for a drive that is slated to match LMP1 (Le Mans Prototype 1) lap times. However, an estimated 99 to 150 drivers will get their hands on the standard road-legal versions by end 2018; we know we’re keeping our eyes peeled for that inevitable message from Aston Martin that the AM-RB 001 is completely sold out. Oh yes, do note that that AM-RB 001 designation that we keep repeating here is apparently only temporary. By the time we bring you news of the model selling out, it will likely have a new and proper name.