The first in a series of Mercedes-Benz SLS AMG ads featuring Michael Schumacher was released today. It shows Schumacher driving the car through a tunnel at high speed, steering it off the road, up one wall, across the ceiling, down the other wall, before safely and smoothly getting the car back on the road. 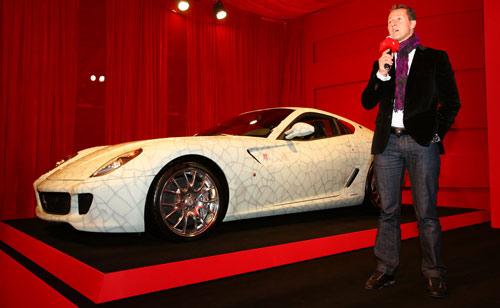 A one-off Ferrari on which we reported last month has been auctioned off for $1.77 million, including taxes. The Ferrari 599 China was snapped up by an anonymous, silent auction participant based in Shanghai. The one-off Fiorano was hand painted by Chinese artist Lu Hao with a pattern reminiscent of the sought-after Ge Liln porcelain […] The wealthy prince Sheikh Mohammed bin Rashid Al Maktoum, the crown prince of Dubai has gifted the already rich former F1 racer his own piece of “The World”. Situated off the coast of the United Arab Emirates, “The World” is a grouping of man-made islands developed to look like a map of the Earth. Valued […]

Another day, another spectacular tower in Dubai: The Michael Schumacher World Champion Tower, a curvy building “inspired by the geometrical order of a snowflake and the aerodynamics of a Formula 1”, will not only appear in Dubai but in six other cities around the world. According to the architects who worked in Beijing’s Water Cube, […]