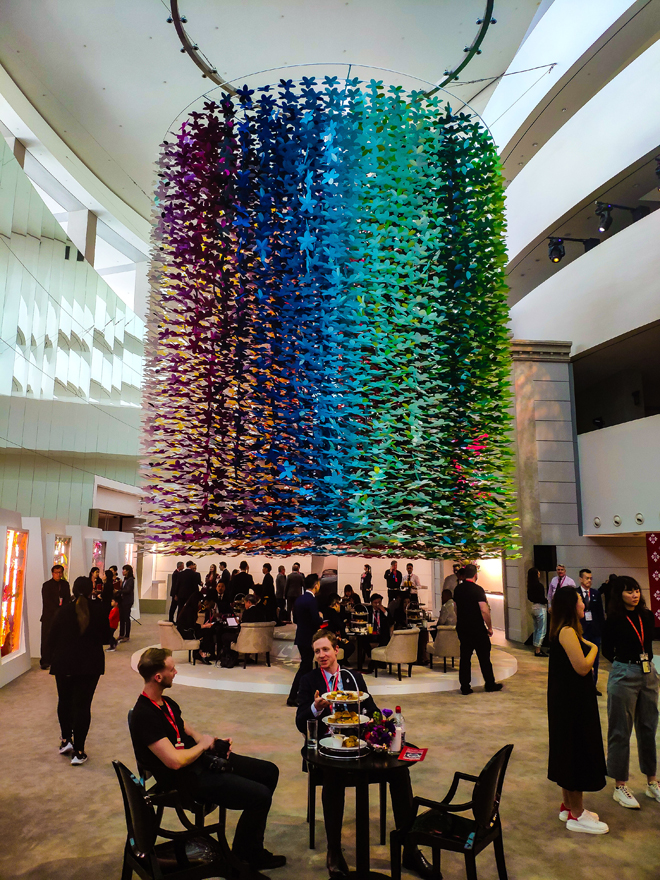 Founded in 1839, Patek Philippe is the last independent, family-owned watchmaker still operating. In the 180 years since its founding by Antoine Patek, a Polish businessman, and François Czapek, a Czech watchmaker (who was eventually replaced by Jean-Adrien Philippe in 1844), Patek Philippe & Cie was a testimony of innovation, artisanship and incredible business acumen. Patek Philippe Watch Art Grand Exhibition re-tells the triumphs (and tribulations) of this remarkable heritage across 1800 square metres of the Marina Bay Sands Theatre in Singapore.

In popular culture, mere mention of the name Patek Philippe is synonymous with Swiss fine watchmaking traditions: It is either the signifier of financial success where major pay cheques are celebrated with acquisition of these wristworn works of art (Axe Capital CIO Taylor Amber Mason played by Asia Kate Dillon does exactly this in Billions, forking out $164,000 for a rose gold Patek Philippe Reference 5270R Perpetual Calendar Chronograph) or a visual motif for ‘legacy’ – a generation heirloom handed down grandfather to father to son (like Driver played by Ryan Gosling in the movie of the same name). 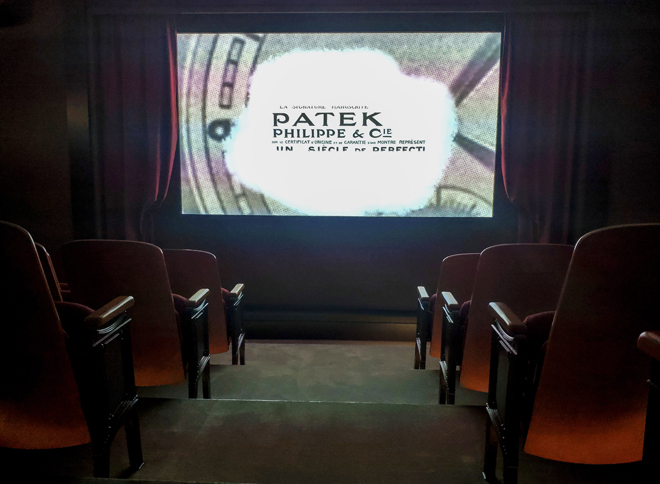 Inside the theatre of the Patek Philippe Grand Exhibition tells the story of the Geneva manufacture in two 8 minute parts. Photo: Jonathan Ho

Patek Philippe changed the face of watchmaking irrevocably a mere 6 years into its inception by introducing the keyless winding system in 1845 and then once more with the world’s first perpetual calendar in 1925. Historically speaking, the Geneva manufacture’s provenance of marrying technical excellence with aesthetic elegance has made it the toast of royalty, aristocrats and men of great accomplishment for close to two centuries. 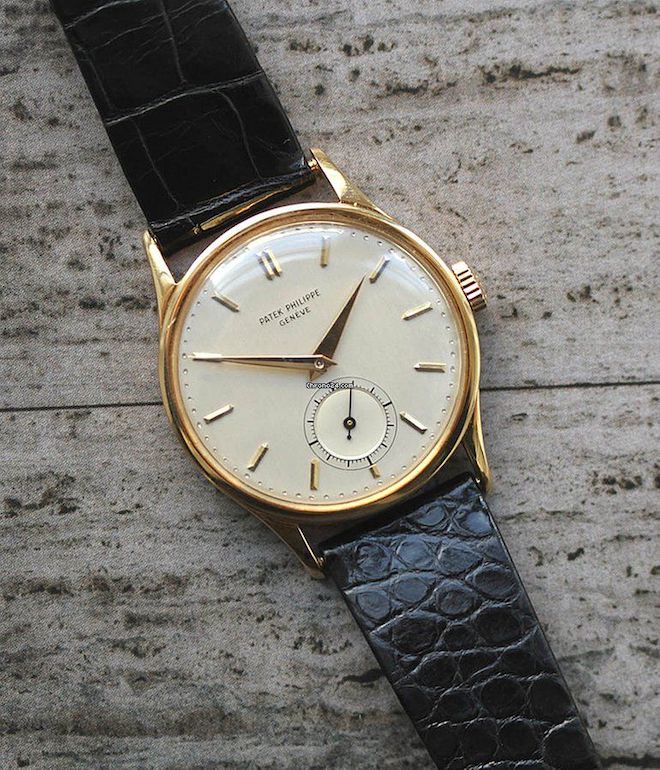 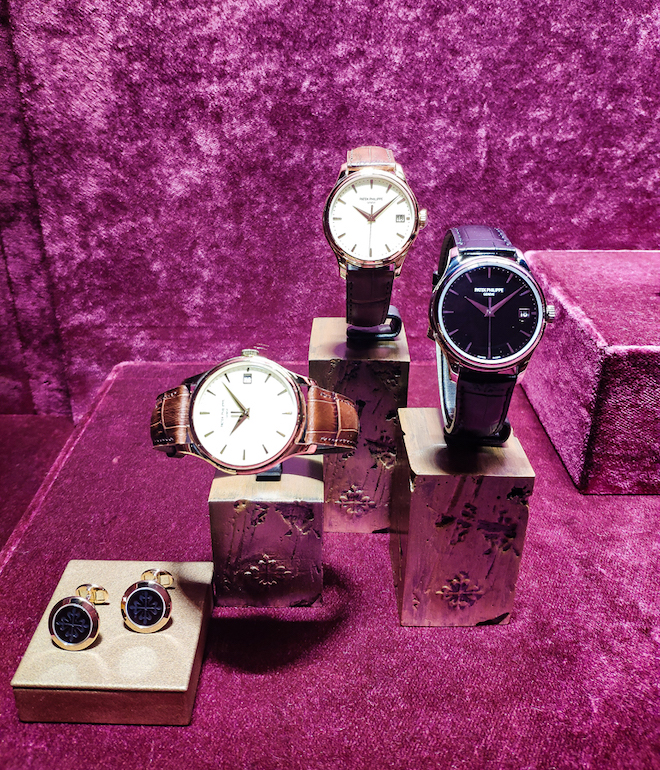 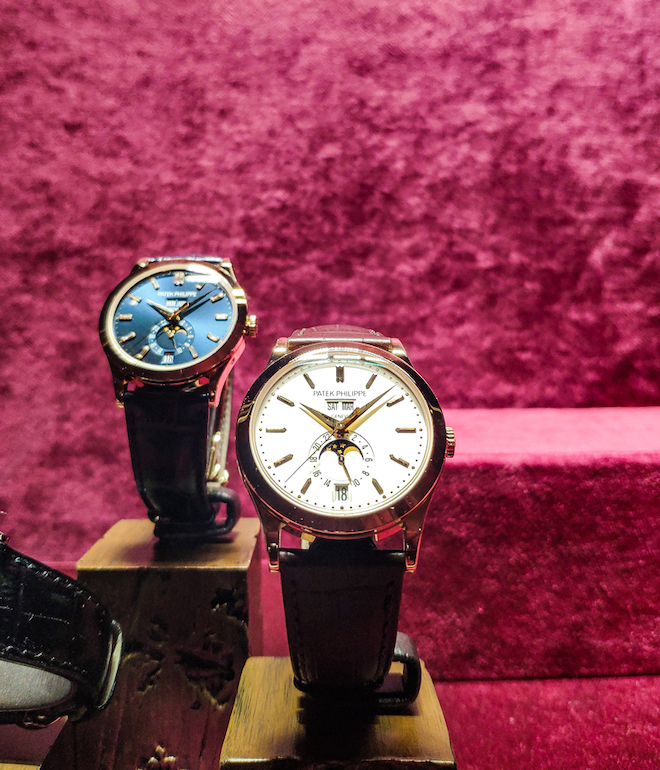 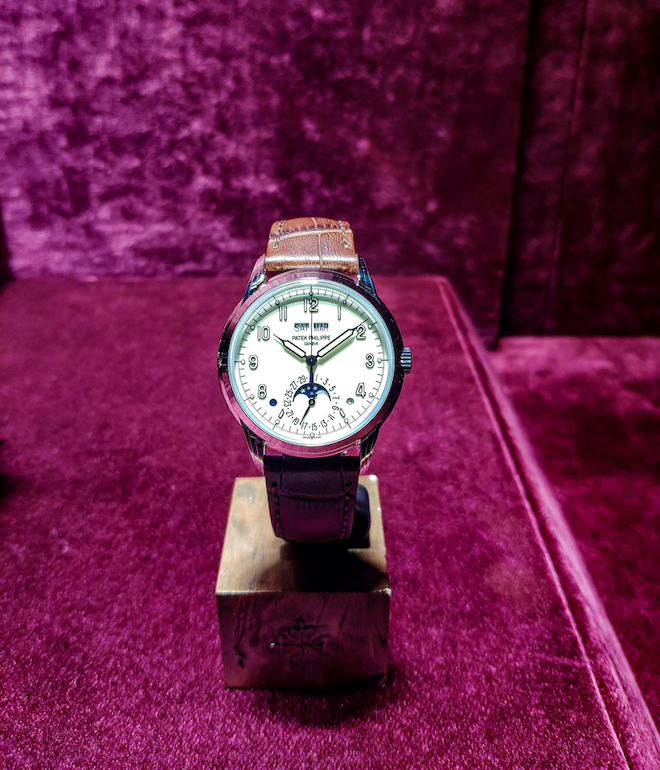 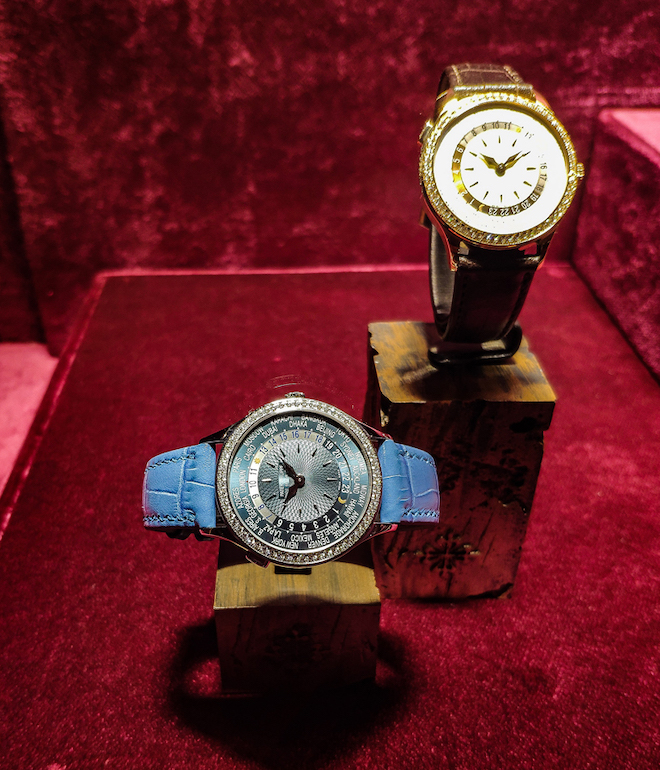 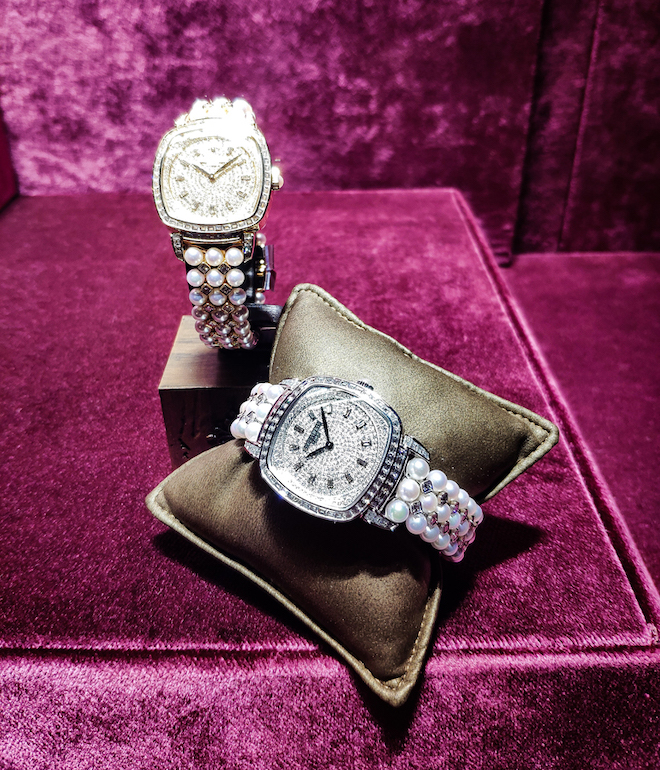 In 1932, dialmakers Charles and Jean Stern a long time supplier for the company, acquired Patek Philippe & Cie. That same year, they launched the Calatrava. 87 years on, it’s still one of the brand’s most iconic models, the epitome of Patek Philippe’s recognisable aesthetics: understated, refined, timeless. It is the first room which greets visitors after the Patek Philippe theatre and historic building entrance. 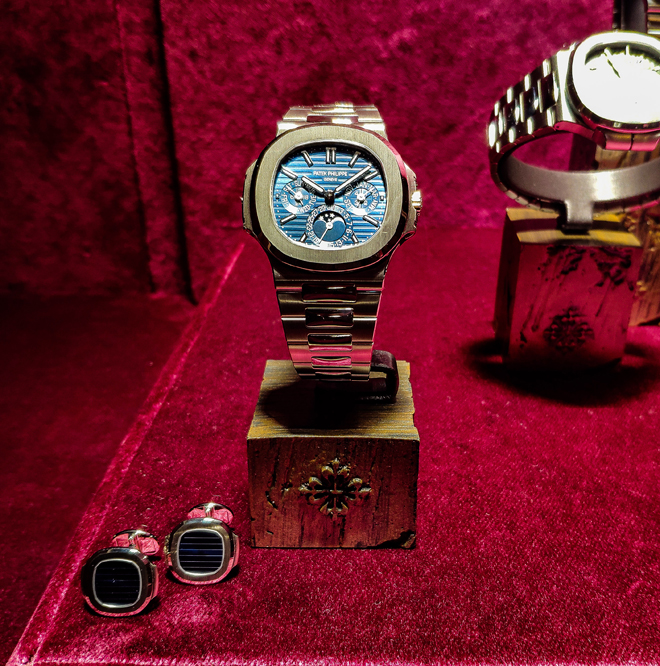 Within the Current Collection, stands another brand icon – the Gérald Genta-designed Nautilus. Introduced in 1976, the Nautilus was an expression of Patek’s aesthetic sensibilities into a new genre of timekeeping – the luxury sports watch.  Ref. 5711, a time-only pillar of the brand’s collection of steel sports watches remains highly in demand and as a point of oddity, one of the few steel sports watches whose secondary market value equal or exceed their precious metal counterparts. Yes, you can view a Nautilus Ref. 5711 at the Patek Philippe Grand Exhibition, it’s not for sale unfortunately. 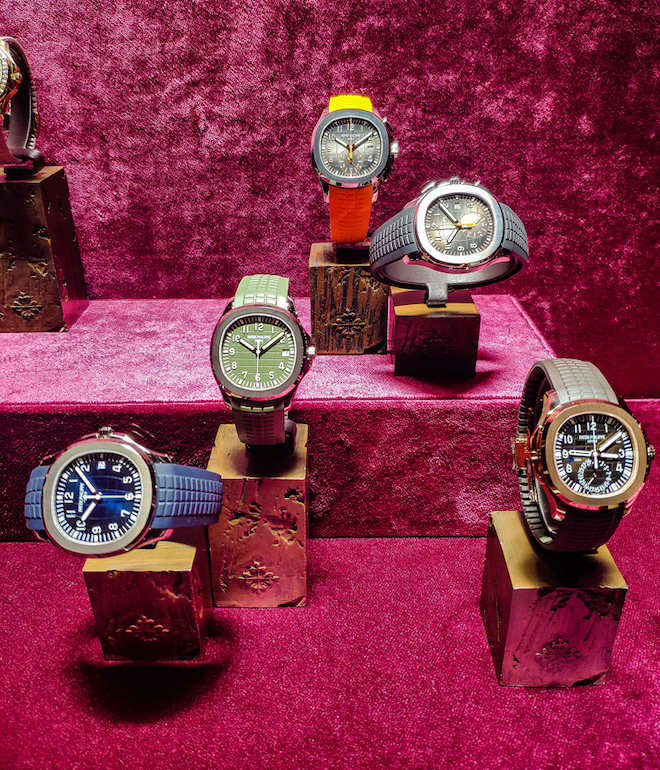 Launched in 1997, the Aquanaut created a sensation. Young, modern and unexpected, it was inspired by its forebears, the Gondolo and the Nautilus. The Aquanaut’s rounded octagon created a gentler, arguably sportier watch designed with a “Tropical” strap, made of a new composite material ultra-resistant to wear, salt water and UV radiation in contrast to its integrated bracelet sports cousin.

On the occasion of the 2019 Grand Exhibition in Singapore, Patek Philippe introduced six limited edition timepieces reserved exclusively for Singaporean and Southeast Asian collectors. Showcasing the exquisite artisanship of the Geneva manufacture, the Patek Philippe Singapore limited editions display an impressive repertoire of the maison’s know-how. Our favourite: 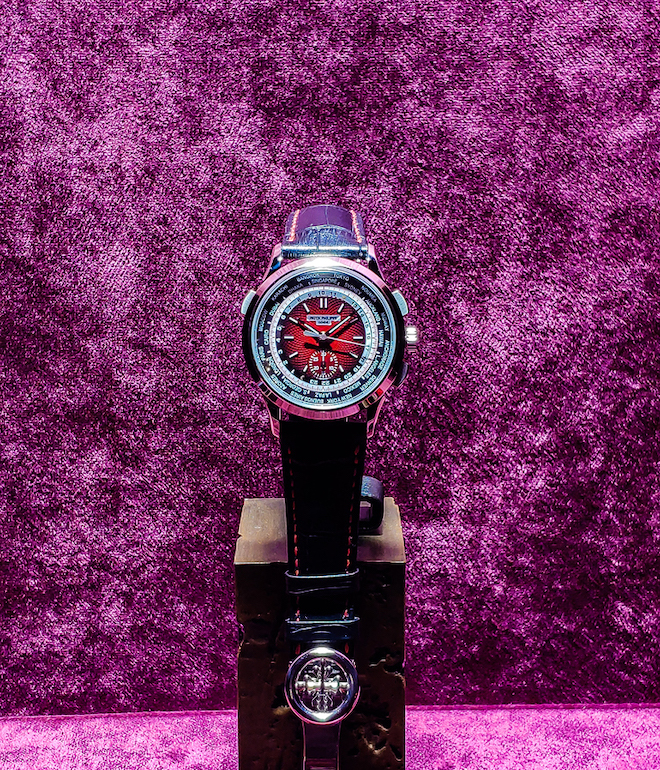 The white gold Patek Philippe World Time Chronograph is limited to 300 pieces and liveried in its signature barelycorn engraved central dial, this time accented with a sumptuous smoked or fume effect, radiating in red to black, symbolising vitality, success and good fortune.

A new interpretation of the 2016 World Time Chronograph previously rendered in blue, the Singapore 2019 Special Edition in distinctive red and white finds another update on its signature city ring, replacing traditional GMT +8 city Beijing with Singapore in honour of the Grand Exhibition’s host. 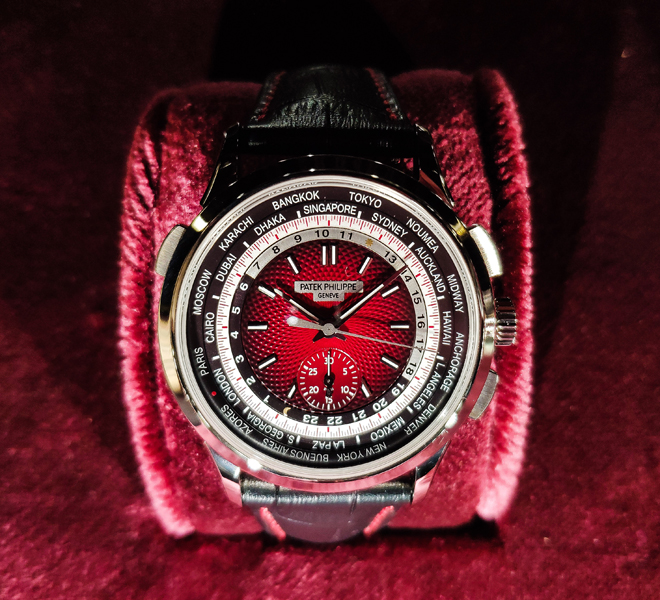 The chronograph function of the Ref 5930 is based on a vertical clutch giving the Singapore Special Edition World Time Chronograph the benefit of continuous running chronograph seconds timing without affecting rate accuracy and power reserve. The sapphire caseback is laser engraved with the inscription “Patek Philippe Singapore 2019”.

An exclusive edition with map of Singapore rendered in cloisonne enamel, the Ref. 5531 was a special edition first introduced at the 2017 Patek Philippe Grand Exhibition in New York before it became a production model. For 2019, the Singapore Special Edition World Time Minute Repeater is a series of five limited edition timepieces reserved for Southeast Asia with the red dot’s marina bay district rendered in traditional cloisonne enamel. 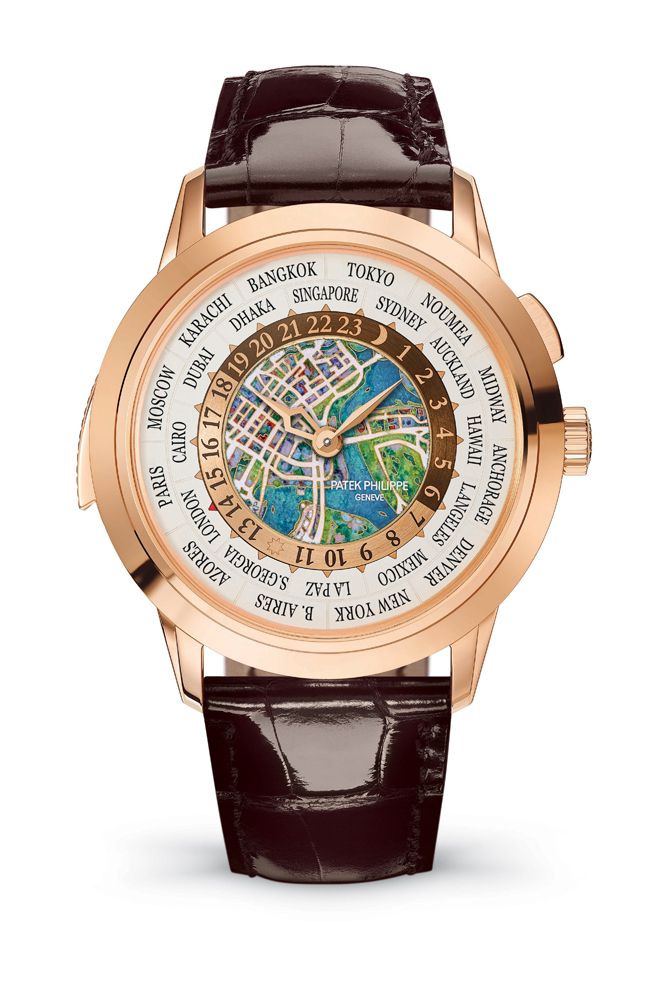 Like the World Time Chronograph, the city ring of the Ref 5531 has Singapore in place of Beijing as tribute and unlike traditional minute repeaters of this nature, the Singapore Special Edition World Time Minute Repeater chimes time at the city located at the 12 o’clock position (as indicated by its central hands) rather than home time thanks to its patented calibre R 27 HU.

Audibly crisp, the rose gold Ref 5531 Singapore Special Edition has both its gongs attached to the mid case optimising the impeccable sound of the timepiece. The pusher at 2 o’clock, move local time in one hour increments while the 24 hour disc renders day and night in in two different colours. Its sapphire caseback recalls the momentous occasion of the 2019 Grand Exhibition held in Singapore. 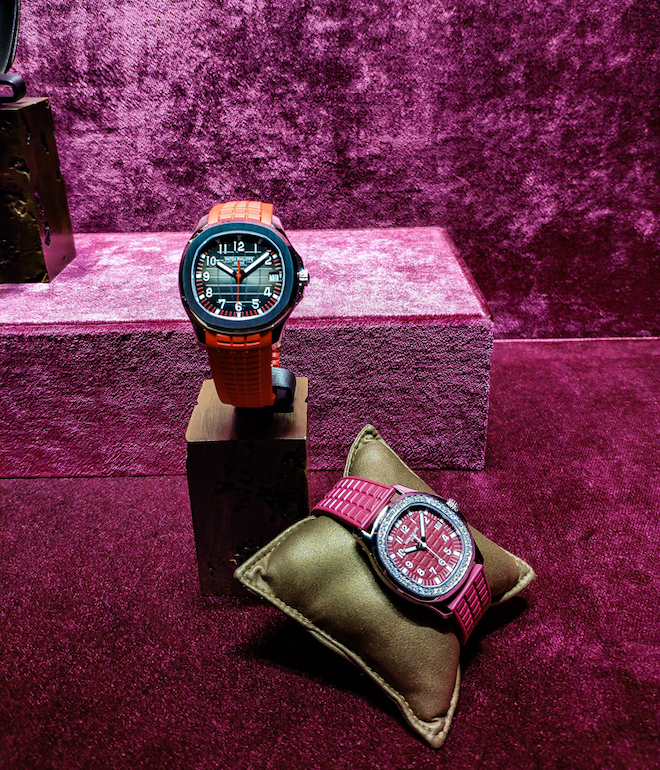 His and Hers Singapore Special Edition Aquanauts. Photo: Jonathan Ho

His and Hers Singapore Special Edition Aquanauts 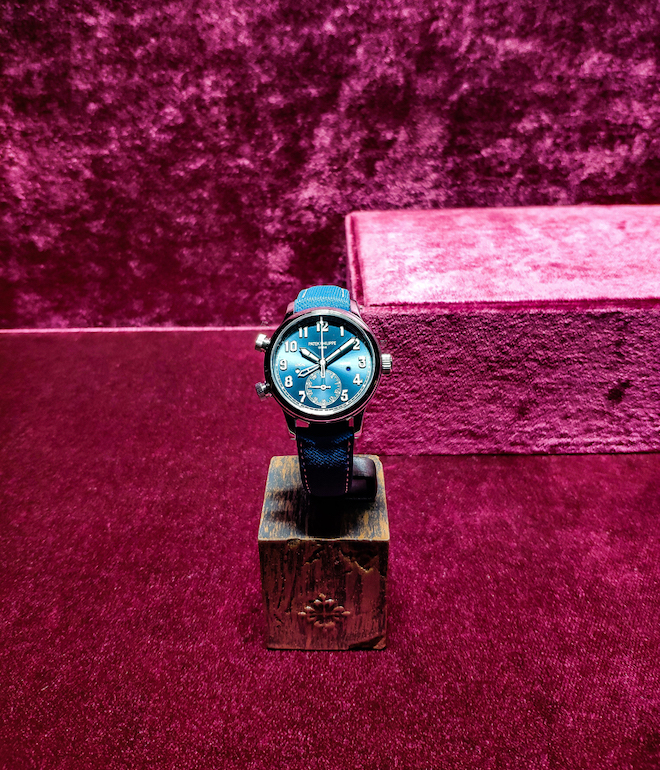 The other Singapore Special Edition timepiece intended for women, the 37.5mm Calatrava Pilot Travel Time is the medium-format execution of the men’s model which polarised the watch collecting community when it debuted in 2017. 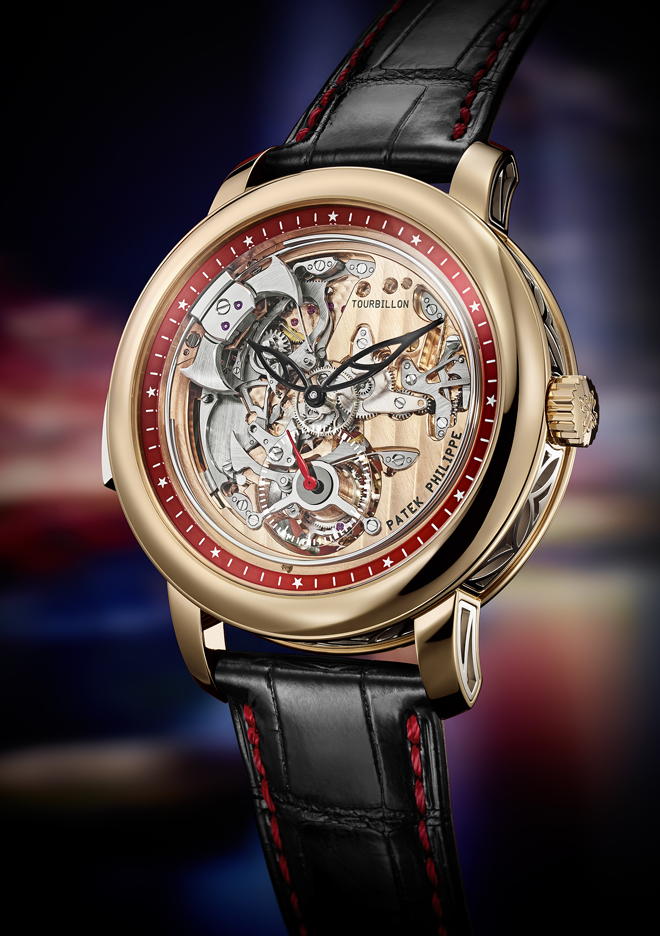 Making its global premier at the 2019 Watch Art Grand Exhibition held in Singapore, a 12 piece limited edition grand complication – a 42mm skeleton Ref 5303 Minute Repeater Tourbillon. Designed with its openwork, dialless architecture, this is the world’s first minute repeater which features gongs engineered for the “dial-side”. 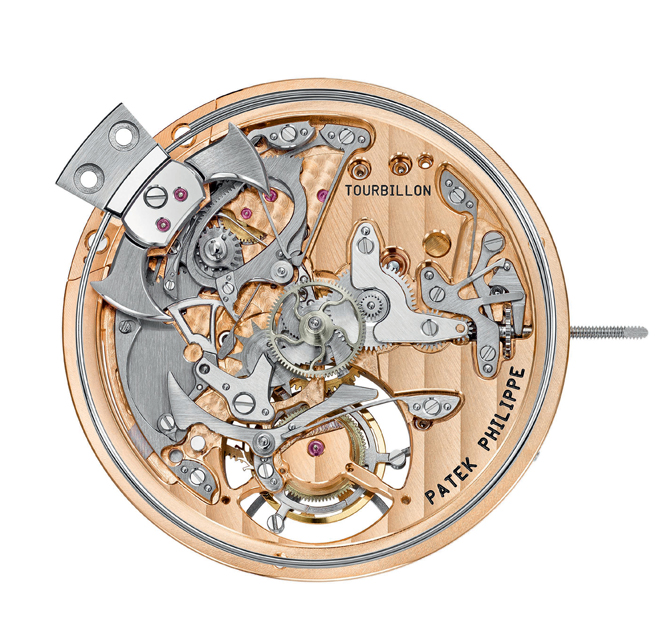 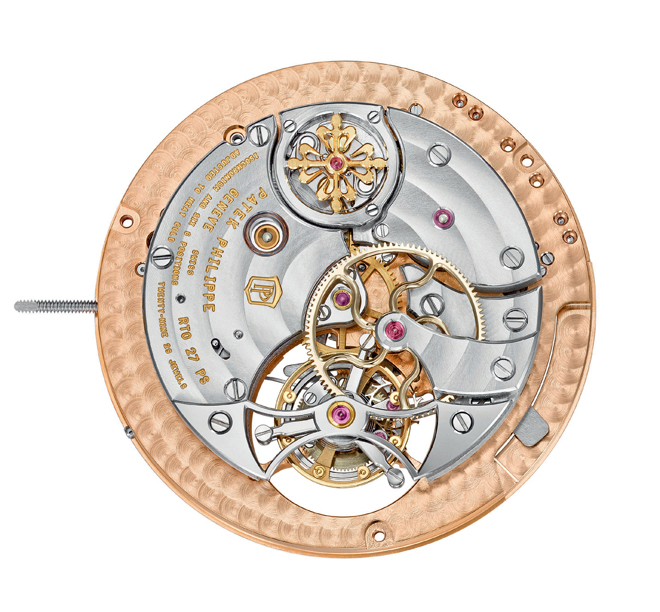 The manual-winding R 27 TO PS was reworked and specially skeletonised to enahnce the beauty and composition of the calibre’s individual components. Together, a symphony of brass and steel thoroughly performing a technical and artistic expression thanks to its dancing tourbillon with underside of its cage admired through a plate aperture at 6 o’clock. 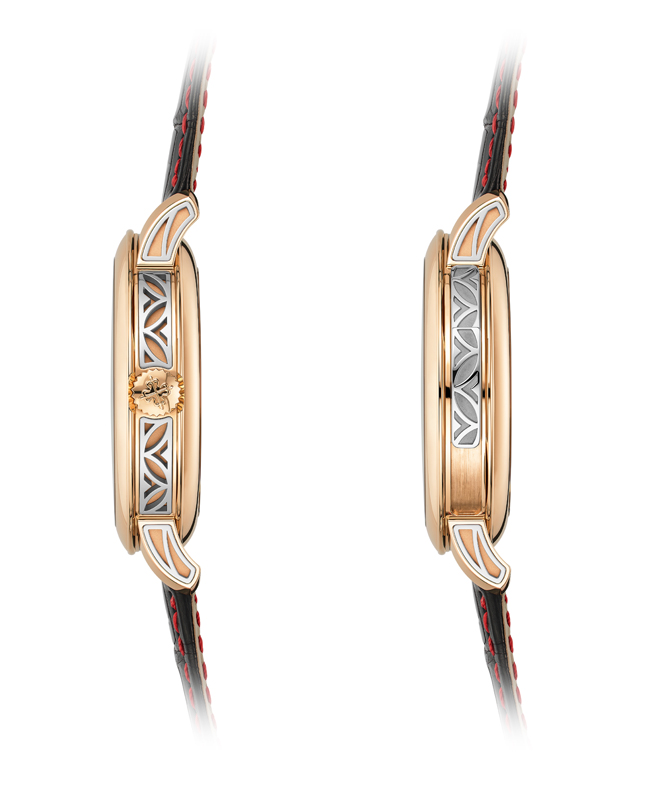 Geneva striping for the plate, perlage for the recesses and circular satin finishing of the striking hammers all add theatrical flourish to the rose-gold case featuring a cambered and polished bezel as well as intarsias in white gold. The arabesques and lattice work on the mid case do make the Singapore Special Edition Minute Repeater Tourbillon a little baroque but it actually lends an air of distinguished and ornate charm to the world premiere. 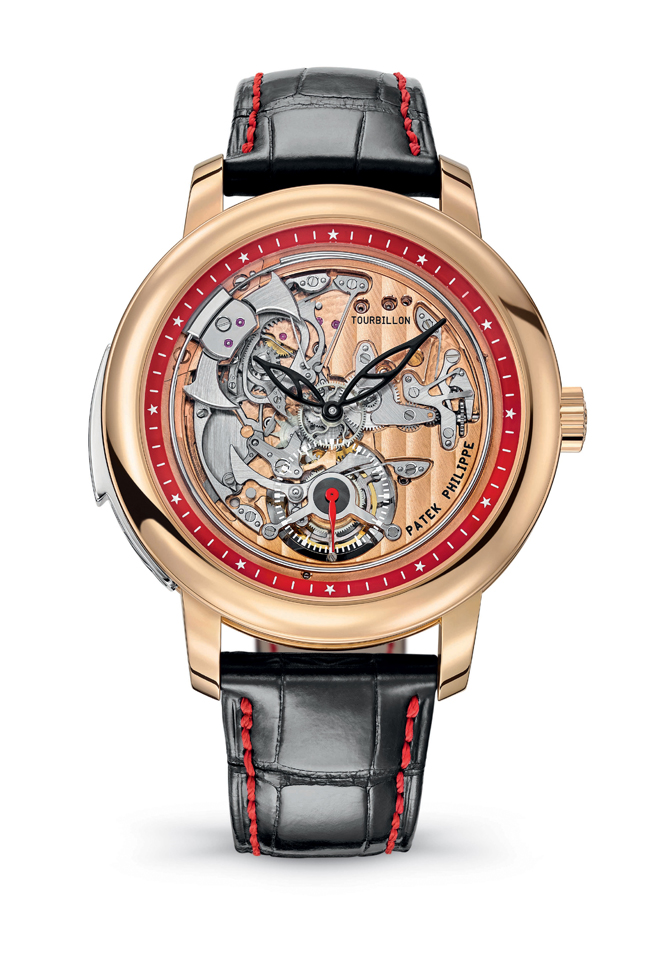 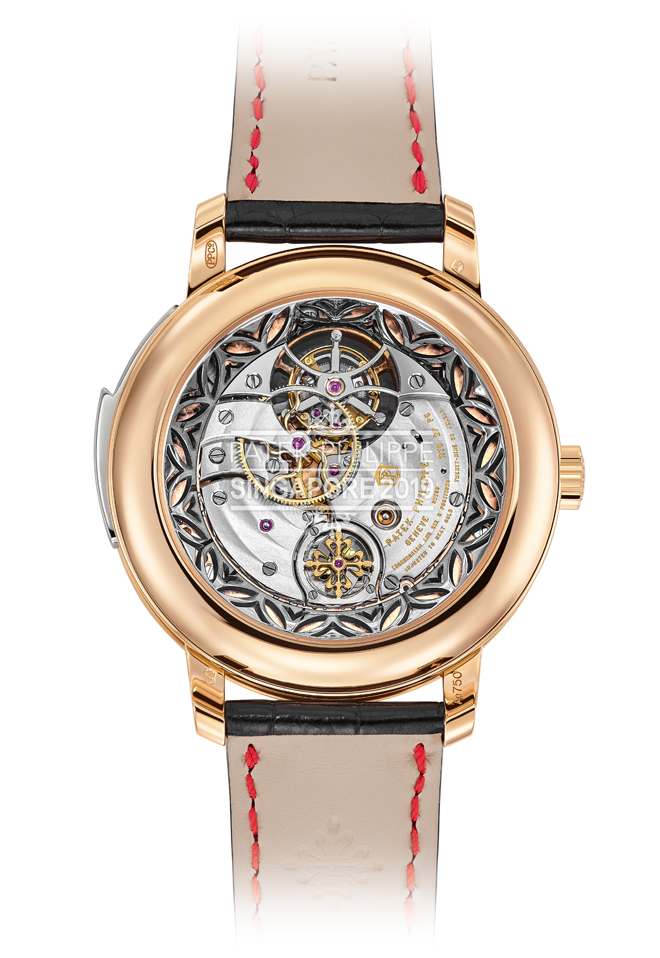