A gold pocket watch made by Patek Philippe for a New York banker in the 1930s has sold for a record $24 million at auction in Geneva. 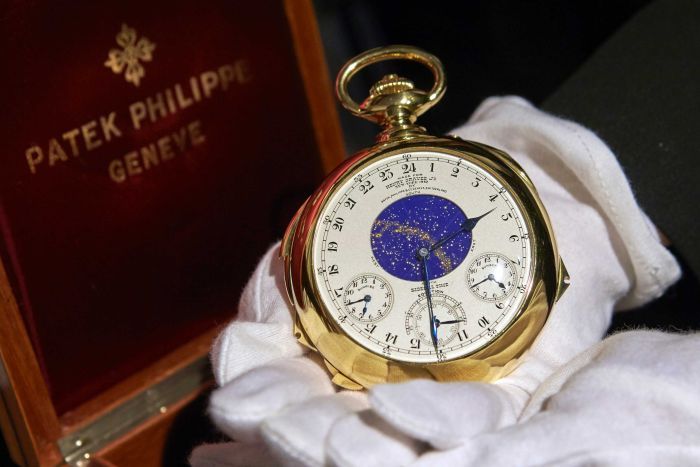 A gold pocket watch made by Patek Philippe for a banker in the 1930s has sold for a record $21.3 million at auction in Geneva.

The sale of the “Henry Graves Supercomplication”, a handcrafted timepiece named after its original owner, a New York banker who ordered it in 1925, weighs more than half a kilo and comprises 900 separate parts.

The winning bidder, who remained anonymous, will have to fork out a total of $24 million, including the commission.

It took PATEK PHILIPPE five years to assemble the watch, which has Graves’s name on the dial. Tim Bourne, Sotheby’s worldwide head of watches, said the sale confirmed the watch’s “superstar status”. Bourne called it an “icon of the 20th century, a masterpiece that elevates the discipline of watchmaking to art”.

A watch industry expert told AFP before the auction the timepiece was not just an immensely expensive accessory.

“This is not a watch you can wear. It is a watch that symbolises strength, power and money,” he said.

The Patek Philippe piece displays not only the hour but also a plethora of other indicators: a perpetual calendar, the phases of the moon, sidereal time, indications for the time of sunset and sunrise, and the shifting night sky over Manhattan. Its Westminster chimes sing joyfully every 15 minutes.

The seller and buyer chose to remain anonymous at the auction at a Geneva lakeside hotel, where bidding lasted 15 minutes.