Marine chronometers were the brand’s claim to fame, and the Grand Deck Marine Tourbillon references that period with various motifs and a brand new complication 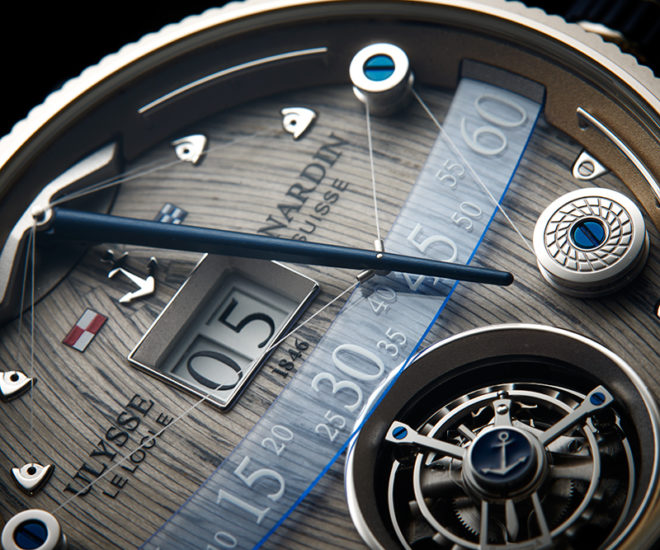 It is the 20th anniversary of the Ulysse Nardin Marine collection and it has expanded the collection with suitably impressive pieces at BaselWorld 2016 to mark the occasion. The flagship for the year’s novelties is the Grand Deck Marine Tourbillon, which showcases the brand’s high watchmaking capabilities. The highlight of the watch is its time display system. Instead of a minute hand, an aluminum boom – the horizontal spar used to angle a ship’s sail to the wind – points to a graduated arc running across the middle of the dial. Like an actual boom, the one on the Grand Deck Marine Tourbillon is operated by a system of pulleys and wires. For most of each hour, the pulleys at two and four o’clock work together to pull the boom rightwards with a wire. The reverse happens at each new hour as the opposite set of pulleys pull the boom back to the left, in a retrograde motion that takes around four seconds, while the digital display above the graduated arc jumps instantaneously. Naturally, the wire used would be from the nautical world. Known as Dyneema or Spectra, it is a form of polyethylene that’s spun into fibers to create lines, and is used in high-performance products such as parachute suspension lines, climbing equipment, and, of course, yacht rigging. Although the boom is the focus of attention on the watch, detailing on the rest of the dial also serves to reinforce its nautical slant. At 12 o’clock, Ulysse Nardin’s anchor logo is flanked by two flags spelling out “UN” according to the International Code of Signals used by maritime vessels. The flange, on the other hand, is decorated with guardrails and grommets. The backdrop of the entire scene is a dial formed by wood marquetry, to recall a sailboat’s timber deck.

Ulysse Nardin has equipped the watch with the manually wound Calibre UN-630 movement, which has a flying tourbillon positioned at six o’clock. Note the index regulation system positioned on the top of the tourbillon itself, with an arm of the tourbillon cage replaced with the lever used to shorten or lengthen the hairspring for rate adjustments. Calibre UN-630 has two separate barrels – one is used solely for timekeeping, while the other powers the jumping hour and retrograde boom exclusively.

Such an arrangement maintains isochronism; by powering the complications separately, the mainspring responsible for timekeeping will not see a sudden decrease in torque at every hour, when the boom arm must be pulled back and the jumping hour is activated, thus keeping the balance wheel’s amplitude more consistent for better timekeeping accuracy. The final points of interest concerns user-friendliness – the hour display can be quickly adjusted independently for convenience, while the barrels are skeletonised to provide a rough indication of their state of wind. The Grand Deck Marine Tourbillon is limited to 18 pieces.

This story was first published in WOW Magazine.