The Parmigiani Fleurier Toric Kaleidoscope Prestige enchants with a melodious tune and an animated dial. 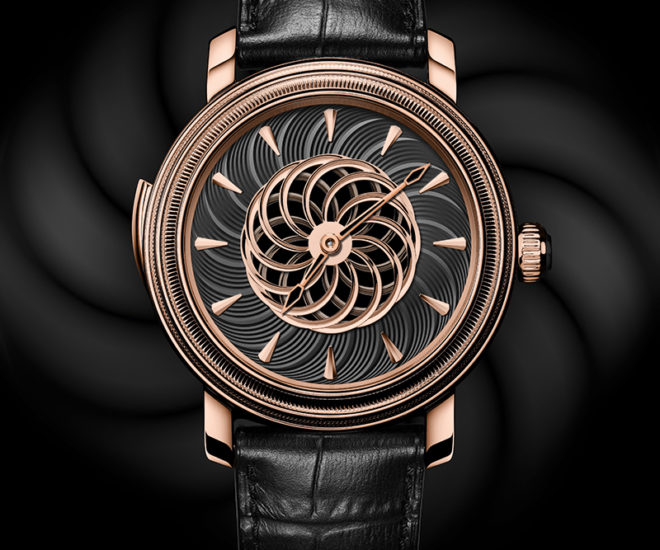 When a watch collector says he’s going to take one of his watches out for a spin, it just means he’s going out with that watch. Unless the watch in question is the Parmigiani Fleurier Toric Kaleidoscope Prestige, in which case it means that he is going to retrieve the watch out from its storage area – presumably a high-security safe embedded into the wall – and play with the mechanism.

One look at this breath-taking masterpiece is all it takes to realise that it is no ordinary watch. Beautifully decorated, it features a delicate fluted bezel and wisps of hand-engraving on the blackened gold dial emulating tall grass being blown askew by the wind. More importantly, the centrepiece carved out of rose gold into the shape of a rosette demonstrates the immense handcraftsmanship mastered at the Fleurier manufacture. This is also the part that gives the watch the name Kaleidoscope.

The rosette is openworked and hand-bevelled in a series of artisanal operations and required 80 hours of handcrafting. Through the openworking, a lower disc made from mother-of-pearl marquetry can be seen. Once the repeater is activated, this disc begins to rotate, interacting with the rosette, which is fixed to produce a dazzling optical effect not unlike that of a kaleidoscope. Thus when the repeater is chiming, not only would the wearer be thrilled by the sound of hammers striking gongs, he would also be mesmerised by the spiralling visual effects on the dial.

Entirely decorated with Côtes de Genève, the movement Calibre PF358 can be seen through the sapphire case back. This is also where the wearer can admire its striking mechanism. In particular, the gongs in this movement are cathedral gongs, which encircle the movement twice for greater acoustic quality: clearer chimes with finer resonance at the end. In addition, the case had been forged with the intention to produce the best acoustics, and so the sound waves oscillate at optimal frequencies inside the case.