The Senator Chronometer is the latest model from Glashütte Original to be extended with a reference in blue. We take a deeper dive here… 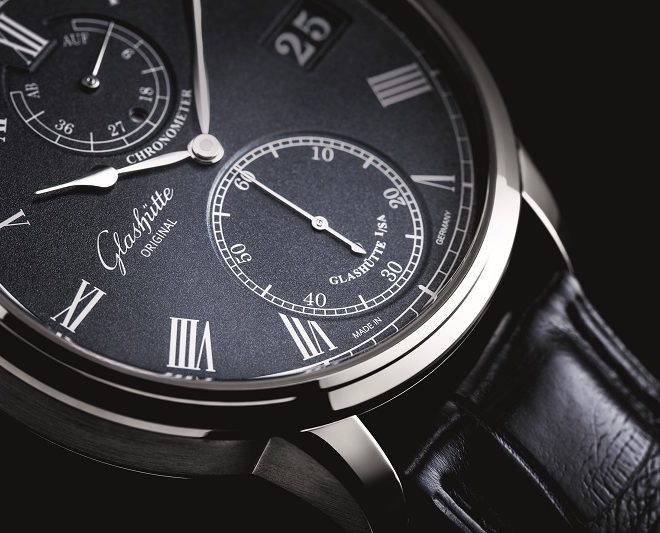 For the past 20 years, Glashütte Original has dabbled at various points with blue colorways for its watches. The latest timepiece to receive this treatment is the Glashütte Original Senator Chronometer, the seemingly simple watch with a power reserve indicator and large date display.

The Senator Chronometer is a chronometer, though it isn’t certified by COSC like Swiss-made watches. Instead, its certification comes from COSC’s German counterpart, the Glashütte Observatory, which tests each watch to the German equivalent standard of DIN 8319. The precision requirements of DIN 8319 are identical to COSC’s, but its tests are only done on complete watches (sans straps).

The new reference of the Glashütte Original Senator Chronometer (which we first looked at at BaselWorld, where there are more images) features a blue dial produced by Glashütte Original’s dial manufacture in Pforzheim, and details abound, if one knows where to look. The “base” layer of the dial is created with multiple layers of lacquer, and has a finely grained texture, while markings such as the railway track chapter ring and hour indexes are products of engraving followed by galvanization.

Note how the white markings are all sunken ever so slightly vis-à-vis the dial surface as a result of the manufacturing process. Meanwhile, the power reserve indicator and small seconds counter are more deeply recessed, as is the border within the large date aperture. To match the dial’s color, the timepiece’s strap is navy blue alligator, with a deployant buckle of white gold, which complements the case.

Large date and power reserve indicator aside, the Glashütte Original Senator Chronometer has a few technical tricks up its sleeve that greatly simplify its use. The little aperture within the power reserve indicator is the first – it’s a day/night indicator, which makes setting the date a cinch. The second technical feature concerns time setting; when the crown is pulled out to adjust the time, the hacking small seconds hand resets to zero, while the minutes hand jumps to the next minute and moves only in increments of one minute, to ensure a dead accurate setting of time.