The Credor Fugaku Tourbillon Limited Edition scores with a one-two punch of technical and artisanal mastery. 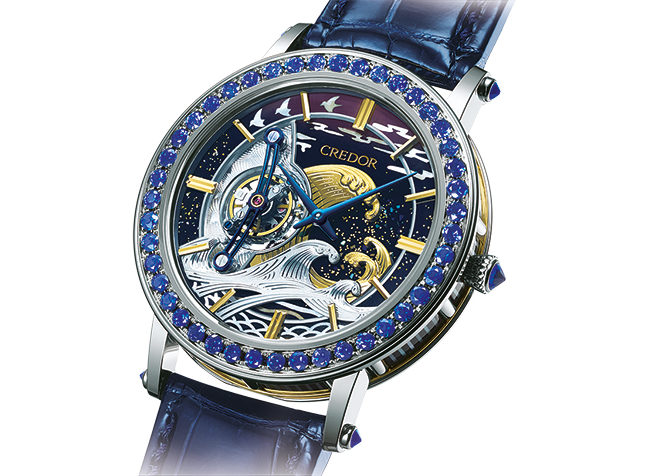 Grand Seiko is widely recognised as the top echelon of Seiko’s offerings, but for those who are in the know, there is a well-kept secret beyond it: Credor. Timepieces from Credor represent the absolute pinnacle of watchmaking that Seiko has to offer, whether in terms of movement design, production, finishing, and assembly, or the crafts and expertise necessary to produce the rest of the watch. Seiko has, however, only maintained a noticeable presence for this sub-brand in its domestic Japanese market, and put more effort into Grand Seiko for the rest of the world. This looks set to change from 2016, however, with the introduction of the Fugaku Tourbillon Limited Edition.

The Fugaku Tourbillon Limited Edition comes in a limited run of eight pieces and will be sold in Seiko boutiques worldwide. It comes as no surprise then, that Seiko has pulled out all the stops to create a timepiece that is brimming with both technical and artisanal content to give Credor a proper international debut. The watch’s Calibre 6830 movement is based on the ultra-thin Calibre 6800 family, and is Seiko’s first to contain a tourbillon. At just 3.98mm thick, Calibre 6830 is also, according to Seiko, the world’s smallest tourbillon movement by volume. This watch is the most ornate execution of a Credor timepiece yet; past models may have included lavish designs such as skeletonised movements with gold bridges and mainplates, but the Fugaku Tourbillon Limited Edition is clearly on another level with its display of artisanal techniques and materials. The watch depicts a wave motif on both its front and back, based on The Great Wave Off Kanagawa, a Japanese woodblock print first published circa 1830.

The waves are engravings of yellow and white gold here, and vary in thickness from 0.5mm to 1.6mm, which creates depth perception. The tourbillon bridge on the back of the watch also has an engraving of Mt. Fuji (known to the Japanese by another name: Fugaku) to mirror the original print. Lacquering is featured prominently too; note the blue-to-purple gradient from six to 12 o’clock on the dial that mirrors the sky at dawn, as well as the Credor signature executed in gold lacquer. Mother-of-pearl inlays on the dial and case middle contribute yet another texture to the watch.

Finally, the watch has been set with 48 sapphires totalling 3.22 carats. The result is a delightfully varied play with light, from lacquer that looks almost black, to shimmering mother of pearl, to sparkling sapphires, all enhanced by a sense of depth.