If a watch’s movement is akin to a car’s engine, then why can’t it be tuned like one? Enter Breitling and its Superocean Heritage Chronoworks. 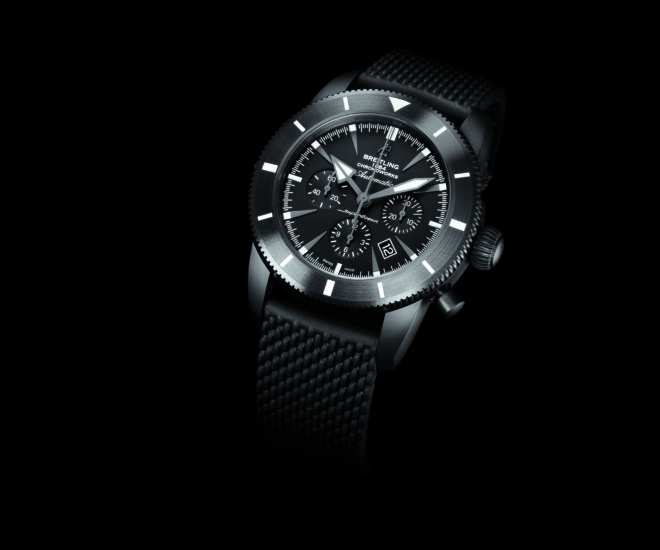 At first glance, the Breitling Superocean Heritage Chronoworks seems like little more than a reworked Superocean Heritage Chronographe 46, just blacked out and fitted with the Breitling 01 movement, as its dial layout suggests. The truth is, however, far from this. The watch actually represents a new chapter for Breitling’s product development strategy, and contains exciting changes under its hood courtesy of the brand’s Chronoworks department.

Set up just two years ago with around five people, Chronoworks was conceived to be Breitling’s Skunkworks department – a small, nimble team that tests cutting-edge developments before implementing them in serial production. The first such creation to be unveiled is the Breitling Caliber 01 Chronoworks, a hot-rodded version of the brand’s in-house Breitling 01 movement, and the engine within the watch presented here. You may recall reading abut Chronoworks in our BaselWorld coverage during the fair.

The “base” Breitling 01 calibre is actually no slouch in and of itself. Vertical clutched and column wheel actuated, it also comes with a 70-hour power reserve and is COSC-certified to boot. Chronoworks has, however, tweaked the movement for an increased going time of 100 hours by making the gear train more efficient, while also making specific improvements to its construction and precision. The most obvious place to begin such work is the escapement, by far the most active part of a movement. By replacing the pallet fork and escape wheel with silicon ones, Chronoworks reduced the two components’ masses and corresponding inertia, and hence, the energy needed to move them. At the same time, silicon’s low coefficient of friction inherent to the lever escapement has been reduced for a more efficient escapement, and the locking/unlocking of the pallet fork is now done without banking pins for greater reliability.

In addition, Chronoworks has replaced three wheels – the fourth wheel driving the seconds hand, the centre wheel driving the minute hand, and the third wheel connecting them – with new silicon ones, again to reduce their masses and friction. The wheels’ geometries have been changed too, to make them more rigid and minimize any flexing that saps energy from the gear train. For the balance assembly, Chronoworks opted to substitute the original index regulation system with a variable inertia system. Regulation is admittedly more tedious now, since the weighted screws on the balance wheel now affect both its rate and poise, but the significant advantage of such a system is its greater positional accuracy, as the hairspring breathes concentrically in all positions. In a throwback to temperature compensated balance wheels of the past, the Breitling Caliber 01 Chronoworks has a balance wheel comprising “spokes” of brass and “rims” of nickel, which work together to maintain a constant inertia regardless of the temperature.

The final significant change to the movement lies in the chronograph coupling. A vertical clutch system typically uses a “friction spring” to reduce any play between the wheels connecting the base movement with the chronograph wheel. By nature of its design, this component saps some energy from the movement. Therefore, Chronoworks reduced this by equipping the wheels with elastic teeth instead, which improved the efficiency of this sub-system.

Chronoworks’s debut development for Breitling is limited to a 100-piece run for the Superocean Heritage Chronoworks.