Often been voted as the best, most influential Formula One driver of all time, Ayrton Senna won the legendary Monaco Grand Prix for the very first time in 1987 (the first of his record six victories at the Principality). To celebrate this momentous occasion from 30 years ago, TAG Heuer is honoured to welcome Bianca Senna to the inauguration of its new boutique in Monaco, for the exclusive preview of a pair of new luxury watches: TAG Heuer Ayrton Senna Chronograph Limited Editions.

In recognition of the 30th anniversary of that historic victory in Monaco, TAG Heuer is releasing two Ayrton Senna limited edition chronographs and one time-only watch, which were unveiled at a special ceremony attended by Senna’s own niece, Bianca at the inauguration of TAG Heuer’s new boutique in Monaco. The Carrera Heuer-01 was emblematic of the new direction in strategy for TAG Heuer under the leadership of Jean Claude Biver. Biver, a fan of skeletonised watches and a firm believer that “the movement is the most beautiful part of the watch” conceptualised of the Carrera Heuer-01 as a highly differentiated, instantly recognisable in-house creation.

The movement driving this TAG Heuer Limited Edition mechanical chronograph is a modified Calibre 1887 which the maison has been using since 2010. In terms of aesthetics, this is the first time, TAG Heuer’s most discussed Heuer-01 proprietary movement is paired with the Senna design codes. With an imposing 45 mm case, the Ayrton Senna Carrera Heuer-01 limited edition chronograph in black brushed steel with red design accents, the skeleton dial and sapphire case back, plays up the appearance and perception of the precision engineering of the Manufacture movement. This time, the new 43, Ayrton Senna  Formula 1 limited edition quartz Chronograph come in DLC black colour-schemes highlighted with touches of red, a combination which is a homage of high speed racing colourways. The chronograph features a Ronda 5040D quartz chronograph capable of timing up to a vaunted tenth of a second (at least for the first 59 minutes, thereafter switching over to the hour counter) – an indispensable feature in a motor racing watch – powering the small counter at 6 o’clock, with the minute counter at 9 o’clock and the running seconds counter at 3 o’clock Finally, we have the time only edition with dial featuring three red lines, hinting at the tracks left by a speeding race car.

All three watches in this limited edition proudly display the famous stylised red lacquer “S” – an exclusive Senna symbol, on the dial and bezel. The bezel also has a minute track, lending the pieces a racing feel. Of course, they are all available with the iconic bracelet with S-shaped “legend” links, as adopted by Ayrton at the height of his racing career. These watches reflect the ethos and #DontCrackUnderPressure drive of a racing legend who was featured in the original campaign with the same philosophy. 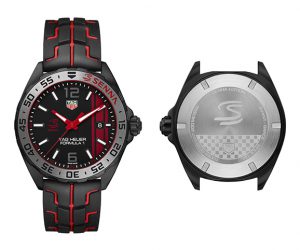 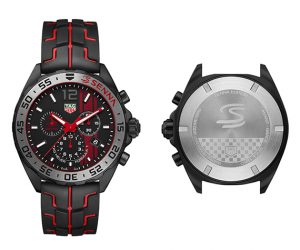 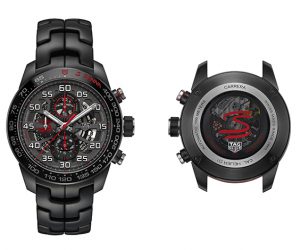