MB&F has unveiled a new timepieces with a 1970s twist – the HM5 ‘On the Road’ – which takes inspiration from the details and bodywork of cars from the era. 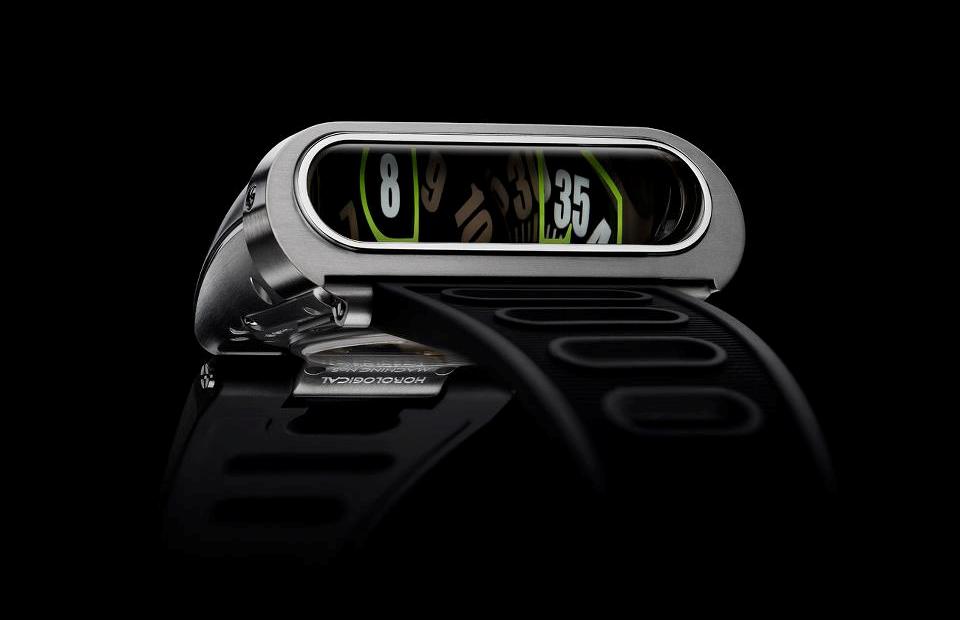 MB&F has unveiled a brand new timepieces with a 1970s twist – the HM5 ‘On the Road’ – which takes inspiration from the details and bodywork of cars from the era.

The brand said: “Horological Machine No.5 is the epitome of the ‘70s – a time when everything seemed possible: space exploration, supersonic flight, hovercrafts, jet packs and the first supercars like the Lamborghini Miura.”

The HM5 is built like the first supercars of those amazing years – complete with chassis, aerodynamic bodywork, rear flaps, exhaust ports and dashboard. Like the instrument panel on an early 70s speedster, the HM5′s display shows the hours and minutes in an mph/rpm fashion.

The unmistakable wedge-shaped case of On the Road Again is direct homage to the plucky Amida Digitrend, you know that digital LED-look display (pictured below).

It also takes unmistakable cues from the sleek low-slung supercars of the epoch, with louvres on their near horizontal rear windows blocking sunlight and heat. The functional louvres on HM5 do the opposite in that they open to allow light down onto the Super-LumiNova numbers on the hours and minutes indication disks to charge them.

The disks are actually flat on top of the movement (under the louvres), not vertically at the front of the case where they appear to be thanks to some optical magic.

Opening and closing the louvres also changes the dial’s light intensity. The louvres are opened and closed by a slide set into the side of the case. Another distinguishing feature of supercars are large dual exhaust pipes that are usually seen accompanied by a roar of engine noise and smoking rubber.

But HM5’s exhausts are not there to expel combustion gases in a throaty roar, but to drain water in case – like James Bond’s Lotus in ‘The Spy Who Loved Me’ – HM5 gets wet. From a technical point of view, HM5 innovates by combining an automatic movement with an optical-grade sapphire prism, which reflects light 90 degrees and magnifies it by 20% – allowing to display bi-directional jumping hours and minutes vertically.