MB&F has just unveiled the Moonmachine, created together with Stepan Sarpaneva. It is a variant of the bug-eyed HM3 Frog. 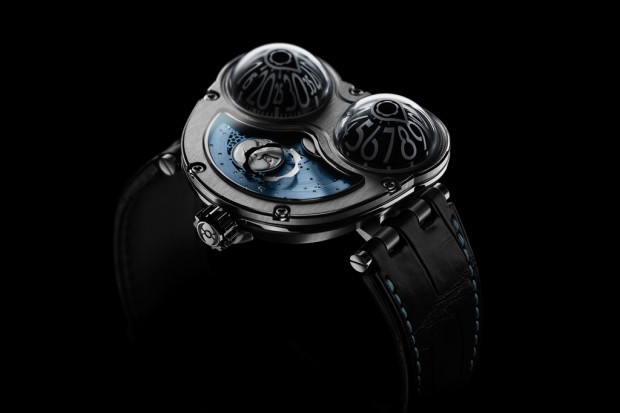 MB&F has just unveiled the Moonmachine, created together with Finnish watchmaker Stepan Sarpaneva. It is a variant of the bug-eyed HM3 Frog.

To create Moonmachine, Stepan has reconfigured HM3 Frog by 90° and added his iconic moon-face moon-phase indicator complication set in a scintillating firmament of northern stars.

Based on Stepan’s own face, the phase of the moon is displayed through a signature Korona-shaped aperture, while the mystery winding rotor takes the form of a steel and 22k gold disc with laser-pierced stars forming constellations visible in the northern sky. HM3 Frog was chosen as the MOONMACHINE platform because the large movement opening in the dial side provides space for the watchmaker to play.

Also, the bulbous indication domes of the Frog are reminiscent of how science fiction buffs have long imagined habitable domes on the Moon.

The multi-layered northern sky rotor adds a stunning background to the twin hand-finished moon faces and makes use of its motion to add vivacity to the moving stars.