The big news for Maitres du Temps at Baselworld this year will be their new Chapter Two watch, but the beautiful Chapter One watch should not be overlooked. To help emphasize that point, Maitres du Temps is releasing a new limited edition, featuring a jet-black dial and rollers set in a high-contrast white gold case. […] 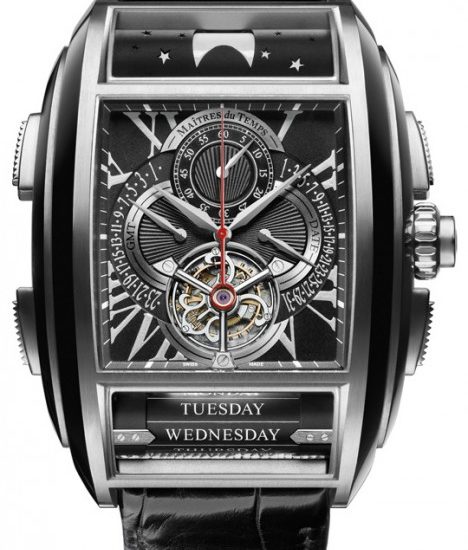 The big news for Maitres du Temps at Baselworld this year will be their new Chapter Two watch, but the beautiful Chapter One watch should not be overlooked.

Whereas the standard Chapter One watch comes in blues and gold, “the Black version is a monochromatic delight.”

Timeless elegance is evoked by the juxtaposition of elegant white gold hands against the black dial and of the bright red of the counterpoised chronograph second hand against the engine-turned sun-ray guilloche of the sub-dials.

The ethereal beauty of the moon and stars against a dark night sky belies the high-tech nature of its anodized aluminum roller—a roller visually and technically balanced by the day of the week roller at the opposite end of the long, sweeping compound curves of the stunningly finished case.

The highly polished tourbillon literally explodes from the dark dial in a highly reflective burst of light, some of which streams in through the opening to the day roller and sweeps up from under the tourbillon, adding to the three-dimensionality of the spectacle. Amid the indication-rich nature of the dial, the tourbillon cage and bridge stand out as if under a bright spotlight on a semi-darkened stage.

“To my eye, where the silver-dialed Chapter One leans in the direction of a more classic look, this black-dialed version feels sportier, faster. And I particularly like the way that the black of the dial continues into the dark night sky of the moon roller above and the black day roller below,” says Mr. Steven Holtzman, founder of MaÃ®tres du Temps.

Developed by a collaboration of three of the world’s greatest watchmakers, Mr. Christophe Claret, Mr. Roger Dubuis, and Mr. Peter Speake-Marin, Chapter One features a world-first combination of complications: tourbillon, mono-pusher chronograph, retrograde date, retrograde GMT, and two rolling bars at 6 o’clock and 12 o’clock, indicating the day of the week and phase of the moon, respectively.

Chapter One is imbued with the intoxicating fusion of Mr. Claret’s undisputed mastery of high-end complications, Mr.Dubuis’ rich lifetime of experience in haute horlogerie, and Mr.Speake-Marin’s unparalleled ability to bridge the very best of both traditional and modern watchmaking.

The ease of both reading and adjusting Chapter One’s many indications disguises the fact that this is an extremely complex movement that has been handcrafted and meticulously assembled from 558 components.

Efficiently transmitting power to the two rollers and ensuring that they work simultaneously with the time, date, GMT, and chronograph was just one of the immense technical challenges met and conquered.