With impeccable precision and elegance, Longines prepares an all new chronograph for the French Open. 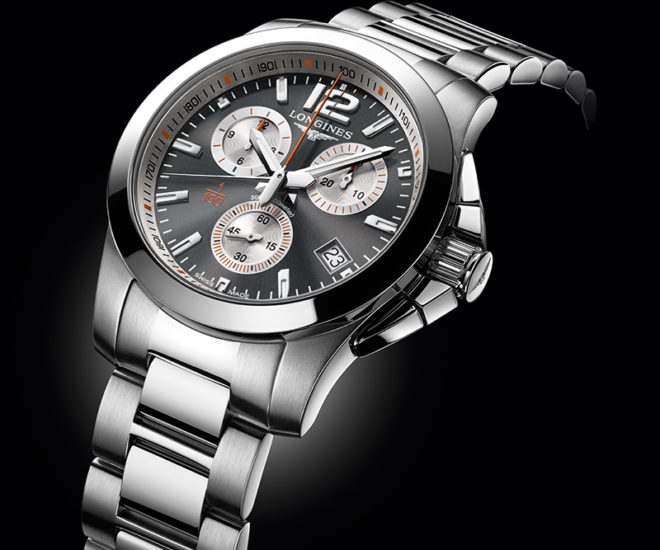 Ever a fan of tennis, the writer David Foster Wallace once characterized the sport as a “game of micrometers” in his essay on tennis player Roger Federer. It is in keeping with this line of thought that the Longines Conquest 1/100th Roland Garros was developed. As the official timekeeper and partner of the French Open at Roland-Garros since 2007, their whole thrust was to deliver the high precision timing needed for the high-speed high-impact sport, all the way down to one hundredth of a second. Deliver they did, reaching an extreme level of precision in the Conquest thanks to its unique (quartz, because it gets the job done) movement and a whole array of other innovations. Other than the L440 movement, this new model will have a microcontroller with flash memory that allows for instant resetting, while tracking down the intermediary timings as well. The steel model includes an anthracite dial that displays all of its timekeeping functions, with a hand in orange pointing to those one-hundredth of a second spots. The dial features the logo for Longines as well, with its trademark winged hourglass – ever the representative for tradition, performance, and timelessness.

Beyond representing the French Open in this aspect, Longines is also hosting their own Future Tennis Aces tournament in Paris. They’re inviting 16 promising young tennis players under the age of 13 to showcase their talent in competition. Right here in Singapore, the trial was conducting by the Singapore Tennis Association at Tanglin Academy in April, where Alexis Tan (aged 12) was chosen to represent Singapore in Paris.

Longines has had generations of experience as an official timekeeper for world championships and partnerships with other sports federations. With consistent elegance, they’ve fulfilled their duties countless times already. Their contribution to the clay courts will definitely be of great value.