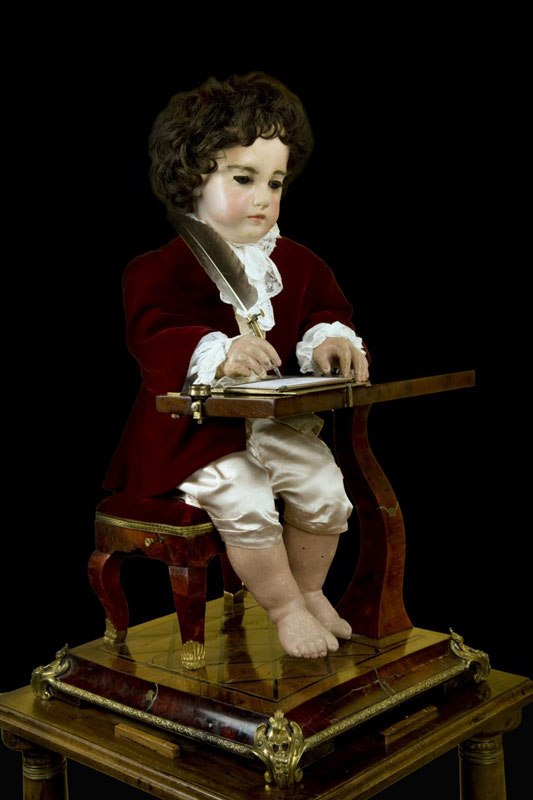 100 years before harnessing the power of electricity, we already had “robots” or automata, as they were called at the time, thanks to innovators like Pierre Jaquet Droz. Men like Jaquet Droz brought machines to life through their inventive genius, creating life-size automata that could write, draw and some, even playing music, long before our 21st century forays into artificial intelligence.

Beyond their obvious connection to puppetry and frivolity, automata bears a historical connection to clock-making and it is here, Jaquet Droz, inspired by Jacques de Vaucanson’s Flute Player, the Duck, and the Drummer; made a clock topped by a flute-playing shepherd figure in the 1760s. In the ensuing years, Jaquet Droz and his adopted son, Jean-Frédéric Leschot, built another three more mind-bending spring-driven automata – the Scribe, the mechanical three-year old boy who can be programmed to write sentences up to 40 words long; the Musician, a pre-teen girl  girl who plays the organ by pressing keys with her finger; and the Draughtsman, capable of producing different pre-programmed drawings. 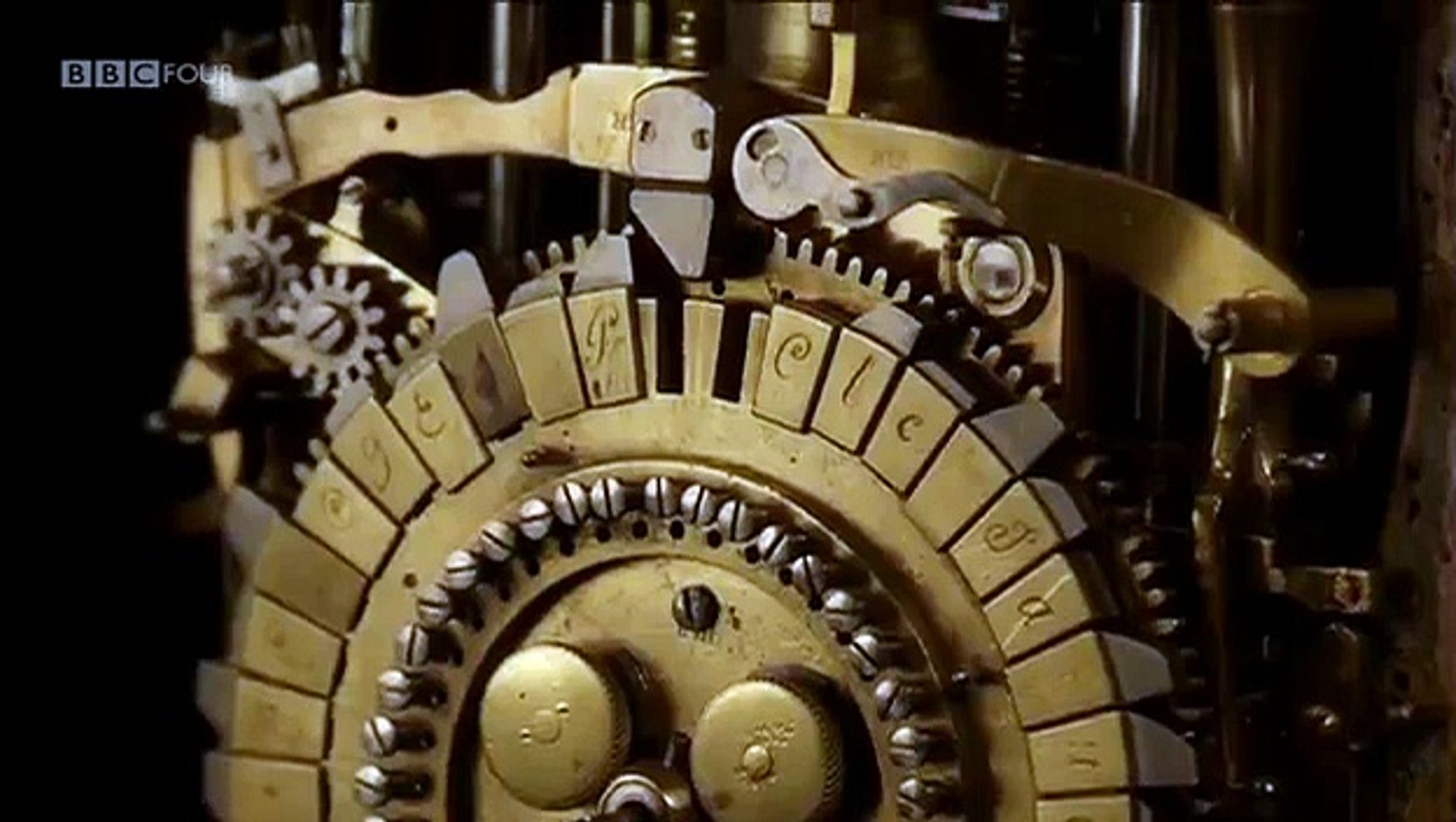 Jaquet-Droz and his sons toured the royal courts around Europe, China, India, and Japan, demonstrating the wizardry of these three automata to grow their watch-making business. Over time, Jaquet Droz’s amazing mechanical productions made him a popular fixture amongst aristocrats and wealthy elite in both European and Asian continents. 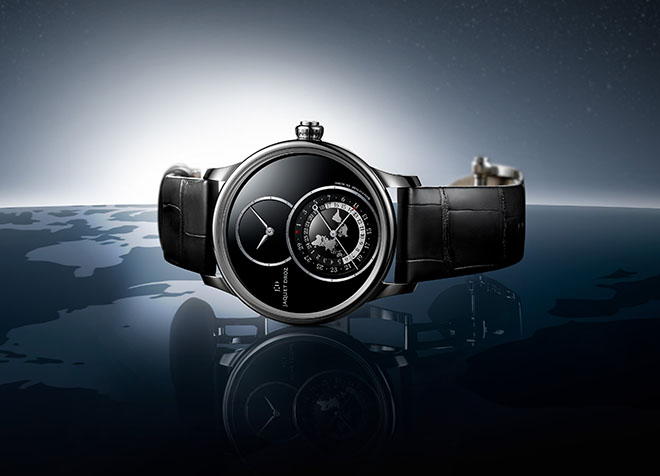 As pioneers of international clock and watchmaking, Jaquet Droz et cie (and sons) would have certainly appreciated a stylish, avant garde creation like the Grande Seconde Dual Time with a subdial encapsulating the family’s globetrotting exploits three centuries ago.

While the father and sons never sold the wondrous machines, they did private commissions for kings, a handful of automata ever to be reproduced, making their primary business one of timepieces and miniature automata incorporated into clocks and watches, it is here, in smaller wares that Jaquet Droz excels with technical and artistic panache. 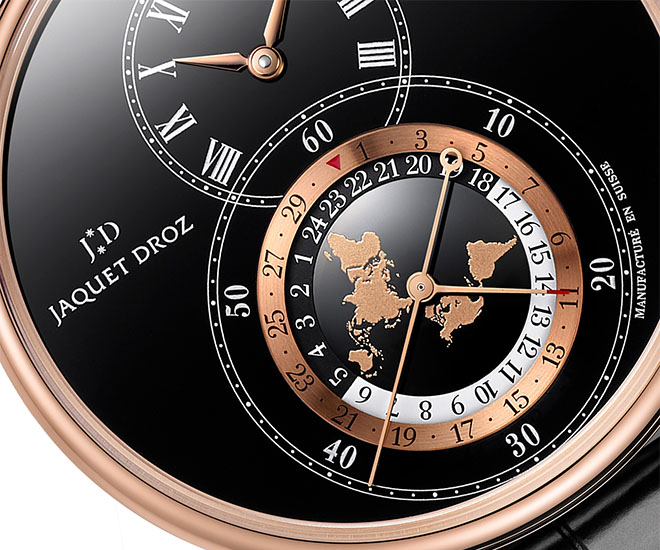 The raison d’etre of the new Jaquet Droz Grande Seconde Dual Time is presented through its eye-capturing powdery finished globe rendering of the continents seen flat from the North Pole in an azimuthal projection. The continents themselves are mirror finished and available in either black or anthracite contrasted by the textures which bring volume to the depiction of planet Earth.

The latest Grande Seconde Dual Time displays 24 hour home time split into two distinct 12 hour segments: white for daytime and black for night; thus, legibility is not an issue for the Jaquet Droz Dual Time executed in the Grande Seconde’s signature figure 8 aesthetic, the reading of home time and local time is both immediate and intuitive. 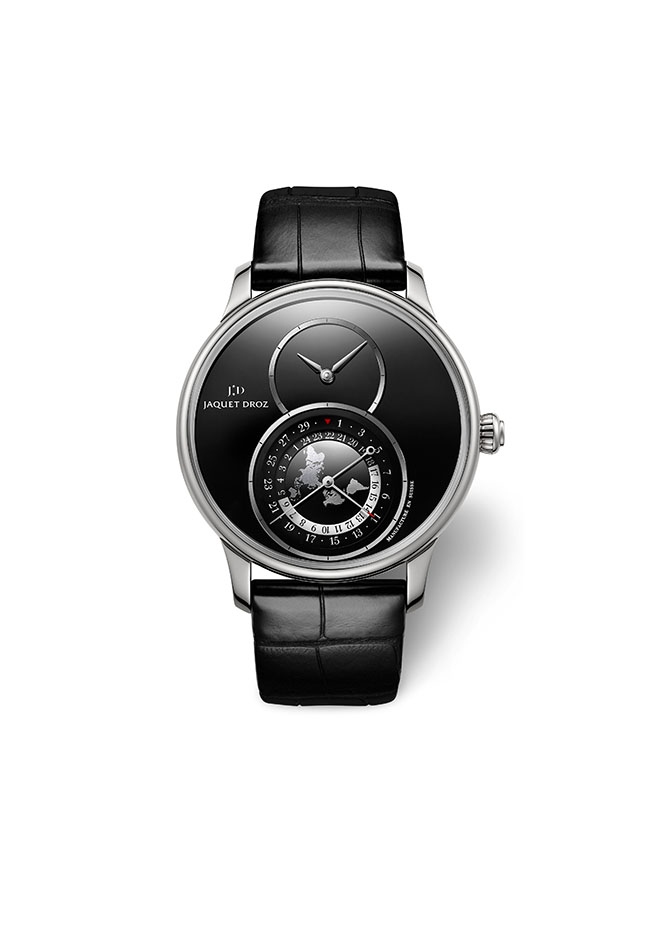 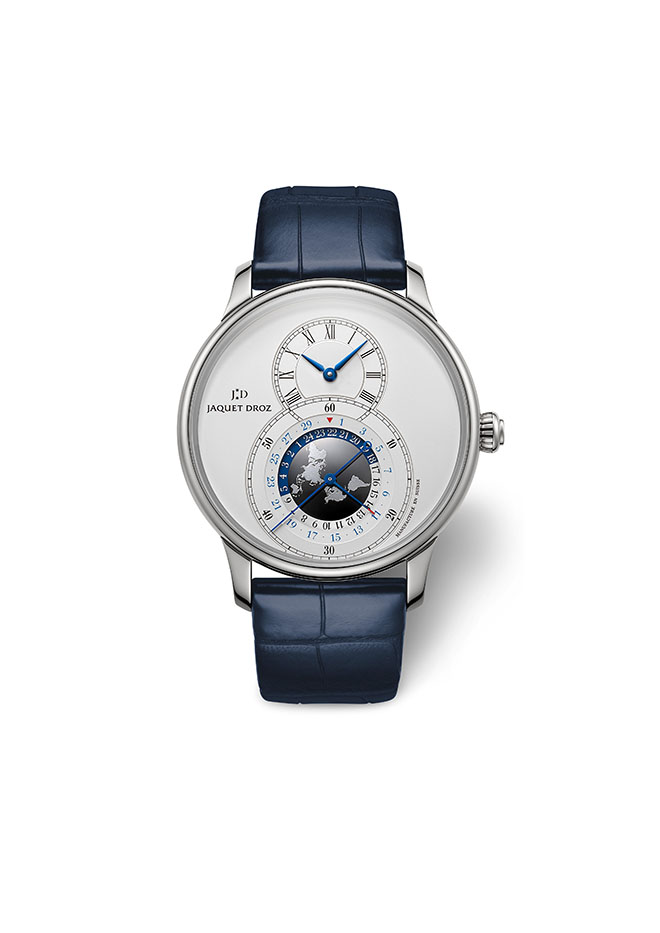 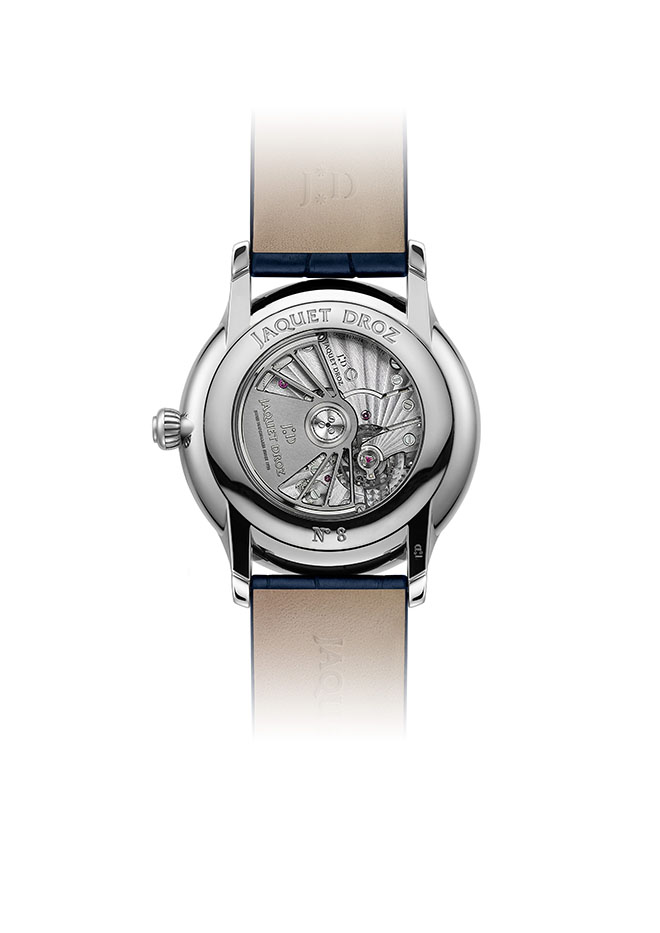 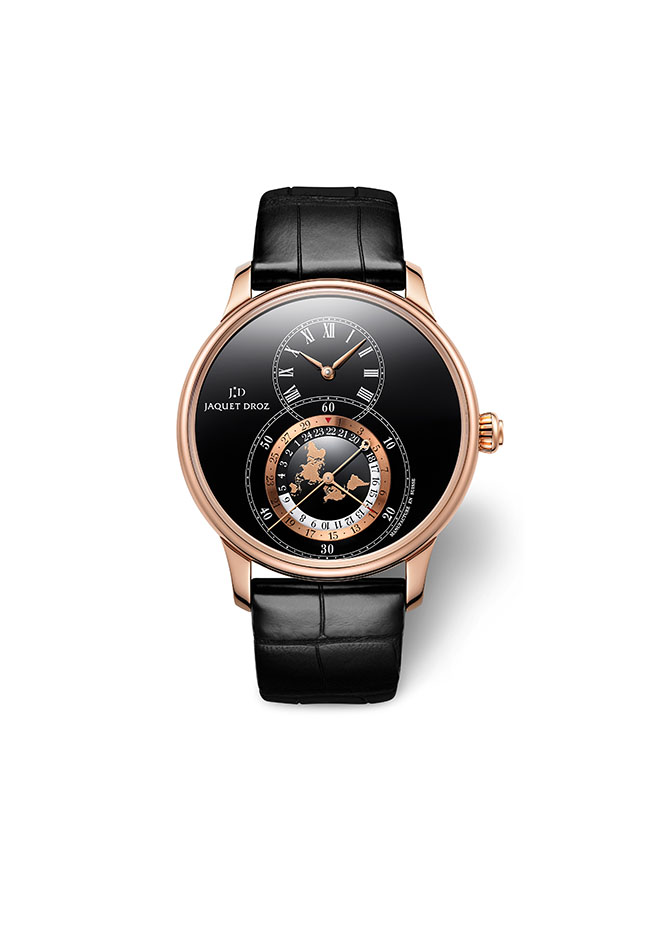 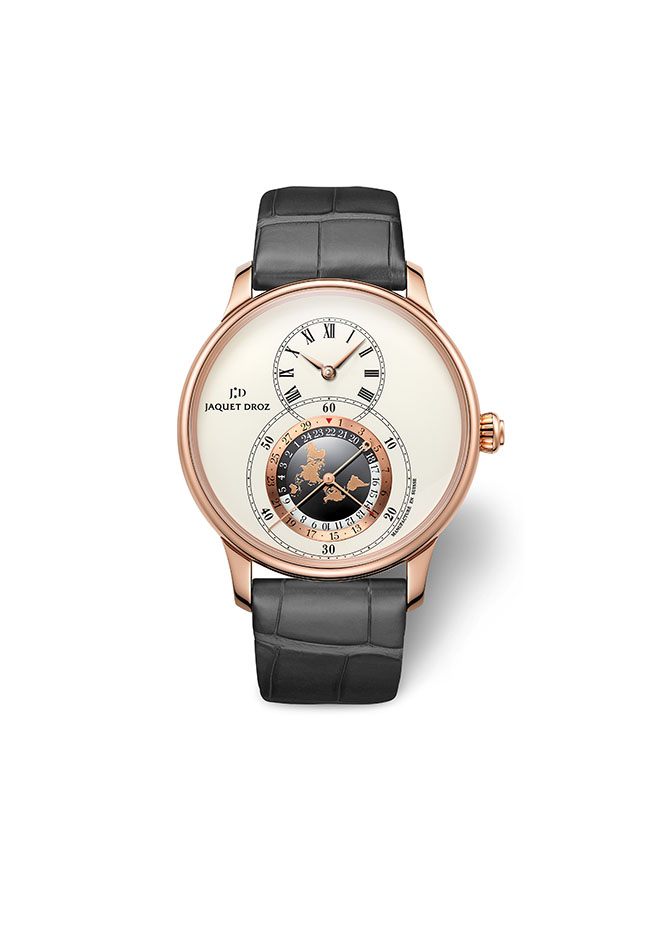 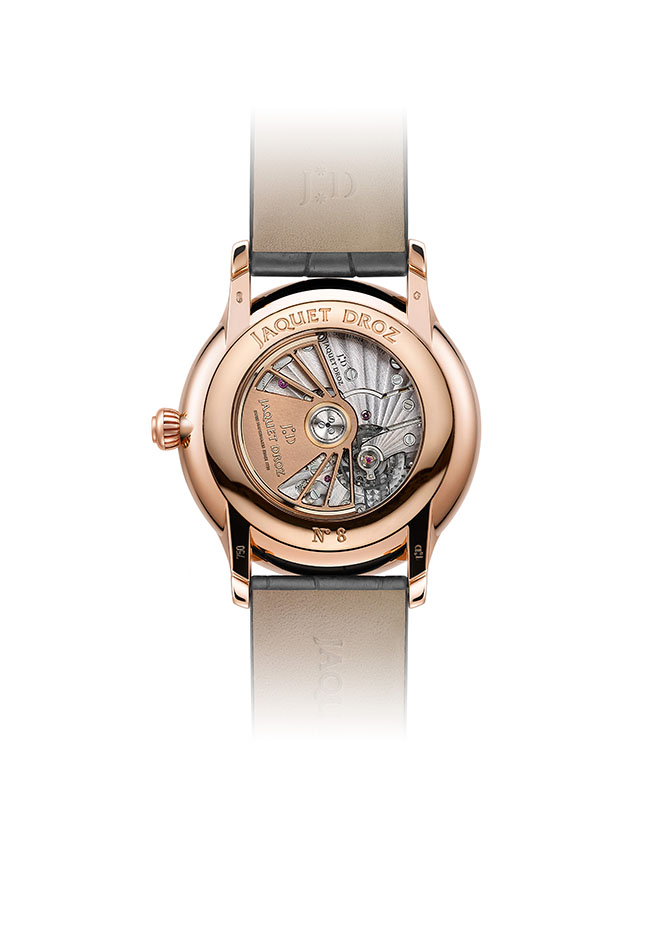