A new year deserves an all-new complication wristwatch so, in conjunction with the year of the monkey, we bring you the latest Gyrotourbillon to rock time. 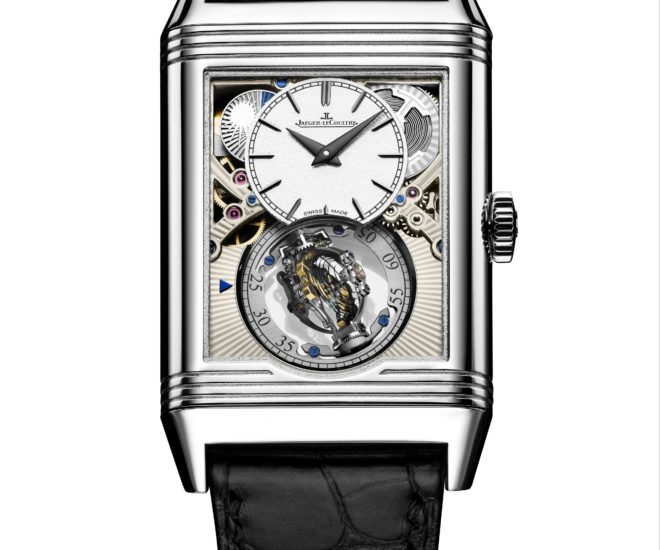 A new year deserves an all-new complication wristwatch so we bring you this creation from Jaeger-LeCoultre, the Reverso Tribute Gyrotourbillon. Introduced at the SIHH earlier this year, we were happy to see a new gyrotourbillon because it doesn’t feel like a new year in watchmaking without one! Ok, so we are going with two images here and you should spend some time looking at them. Frankly, these tell you everything you need to know about the rectangular platinum watch to understand it. Basically, does it show hours, minutes and possibly seconds? Yes it does. Is it a dual time watch with two faces, with day/night counter? Yes it is. Is it an openworked piece, sometimes called skeletonized? Yes it is. Is that a tourbillon at 6 o’clock looking like a floating mechanical work of art? Why yes it is. In fact, that last bit is the titular Gyrotourbillon (basically a bi-axial flying tourbillon).

That said, we do have a few more details to go into but if all you want is the basics, just skip to the bottom with the technical specifications. The movement, which the Le Sentier-based manufacture has invested much time (no pun intended), research and effort into, is the calibre 179, entirely made in-house of course. Some of you will no doubt remember that the Gyrotourbllon was originally a magnificent if somewhat difficult-to-wear complication wristwatch created by Eric Coudray (at least the mechanism) and revealed to the world in 2005. In a very real and proper way, the new Reverso Tribute Gyrotourbillon is an extension of that story. In its current form, the Gyrotourbillon is a dramatically more attractive watch that is quite possibly more manageable on the wrist. The manufacture tells us that the whole watch is some 30% slimmer – both in terms of width and thickness – which is the secret to its improved ergonomics. To return for a moment to that hovering bit of mechanical architecture at 6 o’clock, the Gyrotourbillon includes a spherical hairspring, a non-circular balance wheel and twin carriages. This entire construction is rotating, driven by an external mechanism, with both carriages rotating at different speeds (one minute for the outer carriage and 12.6 for the inner one). Though it is not explicitly stated, the driving force that rotates the carriages must also be the one transmitting power from the mainspring because one train powers both the spinning assembly and the 3Hz heartbeat of that spherical hairspring. The absence of a proper cage here enhances the mystery and that is entirely by design. Enjoy the mystery.