The 910 Anniversary reinforces Sinn’s modus operandi of highly modified movements, but in a vintage design this time. 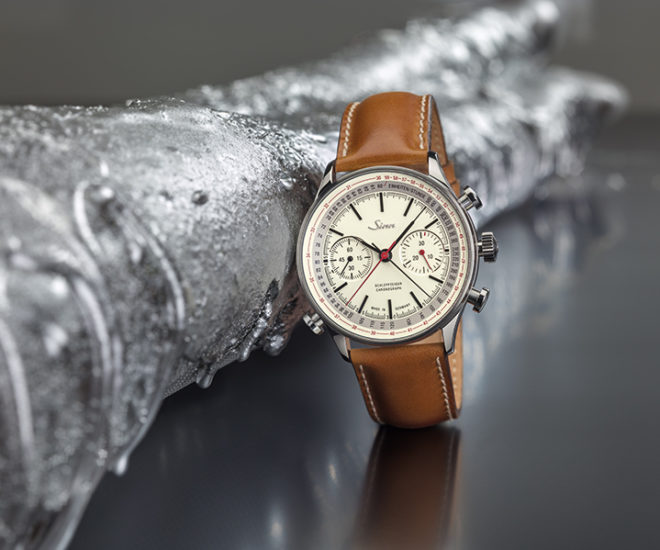 Sinn may be best known for its over-engineered technical timepieces aimed at specialists such as divers, pilots, and even fire fighters, but the brand has a classier side too. The Frankfurt Financial District collection, for instance, consists of dressier watches with complications that cater to the business environment, such as the calendar week and GMT displays. For its 55th anniversary, the brand has melded influences from both these ends of the spectrum to create the 910 Anniversary, a classic-looking chronograph that doesn’t scrimp on the technical details.

At first sight, the 910 Anniversary harks back to vintage chronographs of yore, with a bi-compax dial in grey and beige punctuated by bits of red, and a total absence of luminous coating. The mushroom-shaped crown and pushers further accentuate its traditional styling, although a closer look will reveal several modern details. Note, for one, how the minute and hour hands are similar to those used in existing Sinn pilot watches, instead of vintage chronographs’ leaf- or Breguet-shaped hands. The double tachymeter scale, which allows rates as low as 30 units per hour to be measured, is also unusual, even for modern timepieces.

Sinn is no stranger to adapting movements extensively to suit its needs. In the EZM10, for example, the Valjoux 7750’s chronograph minute totaliser was modified into a jumping hand positioned at the dial’s centre for improved legibility. For the 910 Anniversary, Sinn pulled off a similar coup by modifying the same movement, but into a column wheel controlled rattrapante chronograph instead. This accounts for the additional pusher at eight o’clock – actuating it stops the split-seconds hand for the intermediate time to be read and recorded, while a second press sends it forward to move in sync with the chronograph seconds hand again.

What would a rattrapante chronograph like this cost, given that it’s also limited to 300 pieces worldwide? The answer is a surprising “not too much”; the 910 Anniversary has a list price that is definitely a bargain for what one is getting.

This story was first published in World of Watches Magazine.