The Döttling Colosimo “Double Wing” is inspired by the 1954 Mercedes-Benz 300 SL, better known as the “Gullwing”. 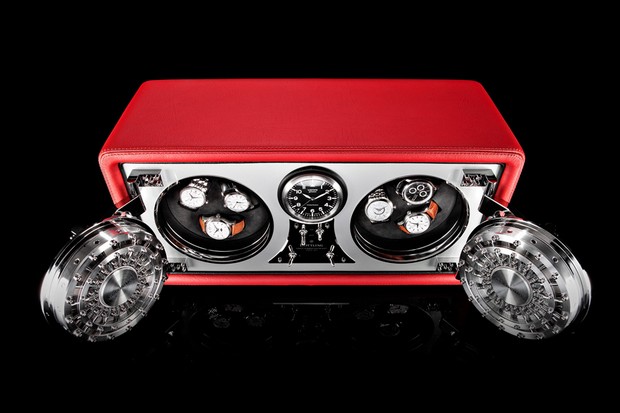 The Döttling Colosimo “Double Wing” is inspired by the 1954 Mercedes-Benz 300 SL, better known as the “Gullwing”.

A symbiosis of fascinating technology and consummate design, the the Mercedes-Benz 300 SL Gullwing was far ahead of its time on both counts.

Today, 60 years after the first 300 SL left the factory, the Döttling Colosimo Double Wing arrives on the scene, its design entirely based on the iconic automotive model. Obvious aesthetics aside, note that the integrated clock is a Wempe Zeitmeister; its center placement certainly inspired by the 300SL’s own dashboard clock. The toggle switches are also a charming homage to the interior of the automotive legend.

The highly intricate locking mechanism of the safe is opened by means of a three-digit personal code. There is room for 3 watches per wing.