Apart from the usual simultaneous timing function of the rattrapante mechanism, Breitling has reduced the complexity of the mechanism and thus offers this at an impressive price 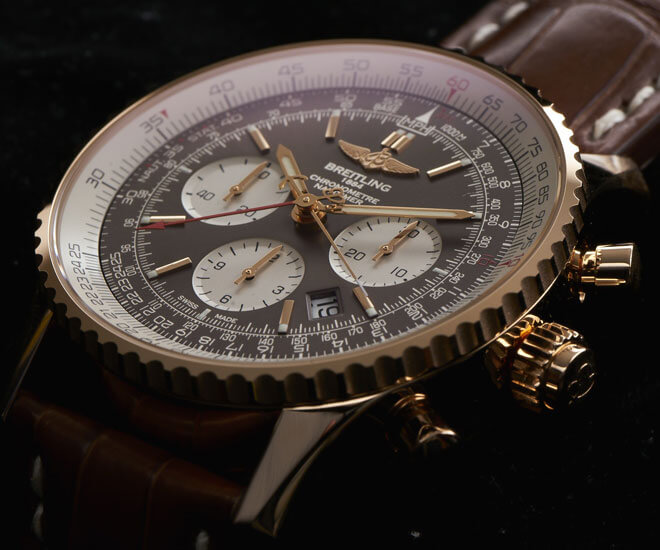 In both the official one-on-one presentation at Basel and in the official release for the Breitling Navitimer Rattrapante, the brand expresses its pride at having created an in-house rattrapante chronograph movement (otherwise known as a split-seconds chronograph). Indeed, such is a truly rare feat in watchmaking, especially when it comes to series production. As Breitling reminds us, “Quality in series” was a slogan Breitling was using way back in the 1940s, and this has been at the core of the company’s push to introduce in-house movements. From the first – the B01 chronograph movement — Breitling has consistently insisted on strong reliability in any mechanical movement it developed. Given that the leader in watchmaking industrial standards (Rolex) has endorsed this calibre for use in its own (Tudor) chronographs, Breitling’s stubborn insistence on going its own way is paying off. The world will expect nothing less from the automatic chronograph rattrapante calibre B03. Of course, the new calibre (COSC-certified) was developed with B01 as the base and has a number of innovations that Breitling is patenting.

Turning to the watch itself, well it is quite a handsome piece that is very imposing on the wrist, thanks to its 45mm diameter and the characteristic slide rule that is ever-present in the Navitimer models. While rattrapante watches typically feature an additional pusher at 10 o’clock or 8 o’clock, there Breitling has integrated the rattrapante pusher with the crown. The dial is a very fetching warm Panamerican Bronze, although it looks like a basic black dial in most images, and the crossed chronograph hands each bear one part of the Breitling logo. When superimposed, the ‘B’ and the anchor appear together, as normal. Significantly, the unlimited steel version comes with a solid caseback, meaning the wearer won’t get to enjoy the visual splendour of calibre B03; the red gold version (limited to 250 pieces) features an exhibition caseback.

Even with that exhibition caseback in play, calibre B03 gives nothing away, looking for all the world like the standard chronograph B01 movement. This is because Breitling has managed to keep the rattrapante mechanism down to a remarkable 28 parts, thus negating the need for the usual added regulating work that watchmakers throw into this sort of movement. This includes some of the clever innovations at work here, involving the isolating system and the brake for the split-seconds mechanism. For the isolating system, gone is the cylindrical pin driving the split-seconds function. In its place is a stamped piece, which is both more precisely engineered and more robust, removing the need for laborious regulation and keeping the system from impacting the power reserve. As a result, Breitling says the new model maintains the same 70 hours of power reserve, even with the chronograph timing functions in the mix. For the brakes, Breitling is using a rubber O-ring and a clamp, once again simplifying matters.