The striations on the case of Ball Watch’s Engineer II Volcano aren’t just for aesthetics. This actually makes the watch antimagnetic… 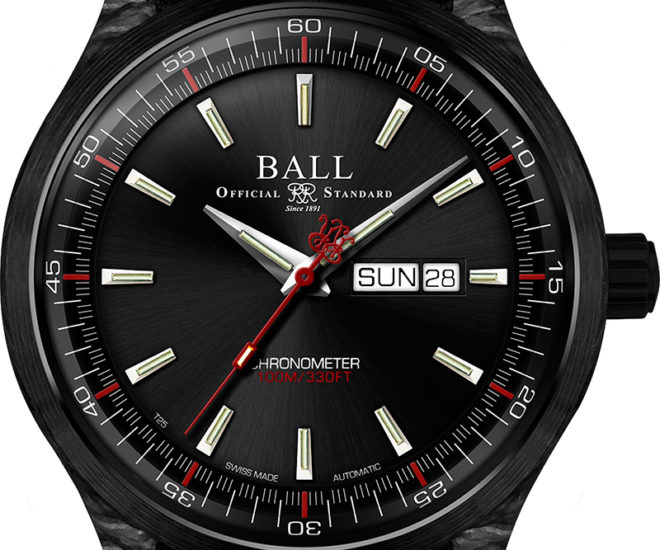 Ball Watch’s founder, Webb C. Ball, was the man who revamped timekeeping standards for rail systems in North America. His work included implementing precision standards and an inspection system for railroad chronometers, thus keeping them to a standardized, accurate time to prevent collisions. Naturally, the company that he founded, Ball Watch, inherited this focus on precision and reliability.

The brand currently retains these traits, but it has evolved to achieve them in other ways. Ball Watch today has worked to enhance its timepieces’ reliability through various means, from a crown protection system that keeps its watches shock-resistant to 7,500G, to a helium release valve for saturation diving that’s integrated into the crown. The brand hasn’t ignored the perennial danger of magnetism either – in the Engineer II Volcano, the case itself is the protection against magnetic fields. The Engineer II Volcano resists magnetic fields of up to 80,000A/m (or about 1,000 gauss), well beyond what’s encountered in daily life from sources such as fridge magnets or laptop speakers. Unlike many other watches, the tried-and-tested soft iron inner cage isn’t used here. Instead, the watch case itself provides the protection, due to a layered construction that superimposes carbon and mu-metal alternatingly. The usage of carbon keeps the watch light, yet scratch resistant. Mu-metal, on the other hand, provides the magnetic protection. The material is an alloy with high magnetic permeability (the Greek letter µ represents permeability in physics) that redirects magnetic lines through it to keep them away from the movement. The layered construction doesn’t just enhance the case’s aesthetics – concentric layers of mu-metal actually produce better magnetic shielding. Magnetic protection aside, the case also provides shock resistance of 5,000G.

Powering the timepiece is a Ball Calibre RR1102-C movement, which is based on the ETA 2836-2. Unlike its more common cousin, the ETA 2824-2, this movement has an additional day wheel. Ball’s version here is also a COSC-certified chronometer. Rounding up the watch’s features are its tritium gas tubes, which glow constantly to ensure that the watch is legible under all conditions, even without any prior charging from a light source.