These 14 timepieces are ensembles crafted to impress and delight, a dazzling combination of fine watchmaking and gemsetting. 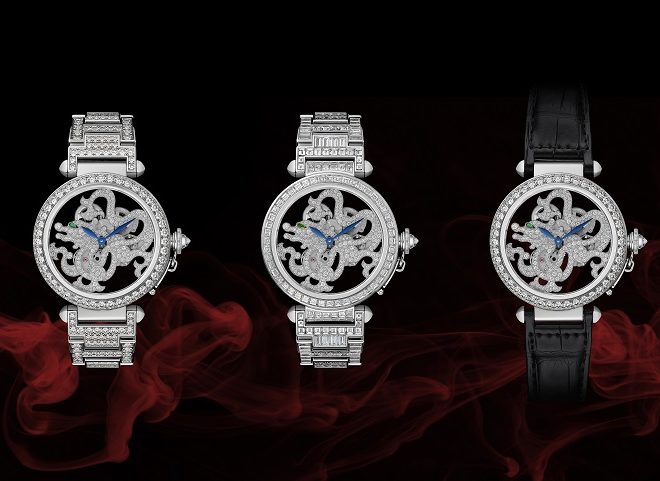 Like many things with a topping, jewellery watches tend to be larger than life. They may not be to everyone’s taste – there are those who wouldn’t touch a brew with cream and sugar in it or people who’d always scrape the icing off a cupcake; but when a watch is dressed in a Technicolor coat of precious stones, everything goes up a notch, or 10. Price for one, for not just the material, skill, design, and man-hours, but also sourcing stones from the ends of the Earth and working tirelessly over them, polishing, cutting, and setting racks up significantly higher costs. And secondly, there’s wattage: Not the electricity it takes to light a bulb, but metaphorically, an index of the amount of attention a jewelled watch is going to attract.

This happy circumstance of putting hand to stone, far from creating broken windows, has instead birthed a bewildering range of jewellery watches of every shade of colour, and taste, limited only by the collective imagination of the human race. Some watches go for subtlety, with just a light dusting of precious stones to bring up the lustre. In other instances, it is the diamonds and precious stones paved like tarmac that do the talking for the timepiece.

In both, and the continuum of moderation in between, a watch is worn all the better when the degree of ornamentation is pitched exactly to what the wearer intends. Here are some that have caught our eye.

If a wattage could be ascribed to this class, it would be on the top end of the scale, by the sheer weight of stones, usually diamonds, paved onto every nook and cranny of the timepiece’s three-dimensional form. It’s conceivable only the night sky will have more stars by number, however, the point is not really to count, but to declare, “Here I am!” People will stare for sure because watches in this class aren’t just slathered with the good stuff; they are also designed in a way that proclaims wealth, loud and proud. Audemars Piguet Royal Oak Offshore Chronograph
When one of the most established Swiss watchmaking houses creates something that is modern and captures the spirit of the times, an icon is birthed. In this case, the Royal Oak Offshore Chronograph, much-beloved of elite rapper and sports celebrities, is released in nearly as many special editions to match. Wholly carpeted with diamonds – save for onyxes to mark the hours – the result is a thoroughly aspirational emblem of excess. Bulgari Octo Bi-Retrograde Full Diamonds
Squat and sleek at the same time, it’s like wearing a bunker on one’s wrist, its walls laid over with diamonds, and dual arcs in black ceramic for the retrograde minutes and date. Utterly glamorous with a commanding presence. Roger Dubuis Excalibur Spider Skeleton Flying Tourbillon with Diamonds
It’s a little ironic that a watch from which so much material has been excised should have such a long name. And in comparison with other megawatt watches in this category, it hasn’t got that many carats on its spec sheet either. But in both senses, whether metal or stone, the Spider Tourbillon exemplifies the ideal of projecting so much presence with so little. And what diamonds it’s got are set using a unique process, into the rubber moulding wrapped around the bezel. If elegance is conveyed in a whisper, that is only relative in a manner of speaking. Timepieces here are not ‘loud’; but for sheer beauty and luxury, they give no quarter in their ability to draw one’s eye. Not by the collar, as compared to pieces that are all about bold expression – that would not be very refined. Rather, they cast their spell by compelling persuasion, even seduction. Enthrallment rather than shock and awe, and once ensnared, many would find they’d rather do backflips than look away. Vacheron Constantin Malte Tourbillon High Jewellery
There’s a white gold case forming the core of the watch, but one doesn’t get to see it, because the entire timepiece, save for the tourbillon and including the bracelet, is entirely paved with baguette-cut diamonds using an invisible setting technique. Working at tolerances down to 100th of a millimetre, the fit is perfect, no different from a second skin. A true creature of light. Bulgari Octo Tourbillon Full Diamonds
The distinctiveness of its octagonal case and its angular lugs project immense presence. At the same time, the arctic blaze of the diamonds tiled over the whole watch finds beautiful contrast in the warmth and animation of the tourbillon. Breguet Classique 5238
Even with diamonds up to its ears, paved on case, bezel, and lugs, the Classique 5238 with openworked dial has not shed a whit of the formal elegance and visual purity of the rest of the Classique family. Somehow, it manages to look luxurious without being extravagant, stealing the show without being  overtly showy. Brilliant! Breguet 5719 Classique Hora Mundi Haute Joaillerie
What looks to be a glamour piece for the ballroom actually scores very high on utility, featuring a self-winding movement with instant jump second time zone display at the 12 and 6 o’clock positions. Engraved day/night indicator is deliciously quaint, and the continent of one’s choice (America, Europe or Asia/Oceania) rendered in round-cut diamonds and set against wavy rose engine turned ocean is a sight to behold.

Every watch marched out of a serious watchmaking factory has had a lot of design thought into its creation: nothing is random, accidental, and every flourish makes a point even if it’s mechanically superfluous. But these watches take design a nudge further, ties are loosened if not flung away, and brushes are inked a little wetter for bolder strokes. Cartier Pasha de Cartier 42mm Skeleton Dragon Motif Watch
Watch aficionados light up for the skeletonised manufacture movement specially shaped to complement the dragon motif; but the latter itself is wonderfully stylised, drawn with softer lines that are a departure from the more regular renditions, all snarly, teeth and talons. Exquisite; and the Pasha’s distinctive crown has just a bit of the oriental vibe to match. Vacheron Constantin Métiers D’art L’éloge De La Nature Swan
The swan being a symbol of enduring love, it is fitting that this watch should come as a pair, a men’s and a women’s model in 42mm and 39mm cases respectively. It takes two months to complete each dial, and four crafts – enamelling, engraving, guilloche, gem-setting – to impart vividness and liveliness to stone and metal, effecting a breath-taking rendition of a lustrous swan spreading its wings on a lake of enamel.

Very much of watchmaking is about technology and technique. The Swiss anchor and hairspring are important milestones in man’s technological advancement, a long way from stone tools and time measurement in drips and drabs. But especially in the 21st century, well into the age of digital and information technology holding sway, some watchmakers remain adamant about performing incredible feats of mechanical engineering, extending the relevance and wonder of the gear-driven timepiece. Hublot MP-05 LaFerrari Golden Jubilee
The plain vanilla MP-05 is already more exclusive than its supercar namesake, being limited to 50 pieces. But the Golden Jubilee created to celebrate SG50 and Big Bang’s 10th anniversary is even more so, as a unique piece. As unique as its orientation, which is not top-down like most watches, but front-back, like a stack of coins stood on their edges. The watch has 11 barrels (most watches have one) stacked just like this, visible as the central spine on the watch face, terminating in a vertical tourbillon and flanked by marked cylinders telling time and power reserve, over a scale of 50 days! Golden Jubilee model adds plenty of diamonds, like scales on a cobra’s head. Vacheron Constantin Traditionnelle 14-Day Tourbillon
It’s like the watchmakers pussy-footed on the documents, to make doubly sure the mechanical merits are highlighted by precious stones without being upstaged; the archetypal “watch with jewellery” as opposed to the reverse. In this case, a handsome balance has been struck. Being adequately embellished, it’s not just the diamonds, but the supreme refinement and conservative elegance of Vacheron Constantin’s tourbillon – with the distinctive Maltese Cross tourbillon cage and outstanding 14-day power reserve – that shines through. Piaget Emperador Coussin Tourbillon Diamond-Set Automatic Skeleton
How can one forget Piaget when thinking about gem-set watches? The manufacture’s dual expertise in watchmaking and jewellery crafting does not go unnoticed especially in such illustrious timepieces like this one. Of course the technical know-how is impressive; it’s not every day that a manufacture gets to successfully create an ultra-thin self-winding skeletonised flying tourbillon. But Piaget had already done that a few years ago, and with this new model, it went a step further, lavishing the movement Calibre 1270D with beautiful diamonds. The case, bezel, crown, and bracelet, as well as the micro-rotor, have all been set with a mix of brilliant- and baguette-cut gems. Jaeger-LeCoultre Master Grande Tradition
The Grande Maison’s watchmaking mastery extends out of grand complications and into such luxuriant yet tasteful gem-setting as seen in these two stunning creations. We have the Master Grande Tradition Tourbillon Cylindrique à Quantième Perpétual with flawless baguette-cut gems cradling the tourbillon as well as set all around the bezel and crown, not to mention its indexes too, and the Master Grande Tradition Tourbillon Cylindrique, which is fully paved with baguette-cut gemstones. In the latter, Jaeger-LeCoultre plays with colours, namely blue  and silver, by mixing blue sapphires with diamonds, and white gold with blued steel.

This article was originally published on World of Watches