From a sketch inspired by the Colosseum to the centrepiece of a diverse range, as relevant today as it was 17 years ago, Bulgari presents the B.zero1 ring. 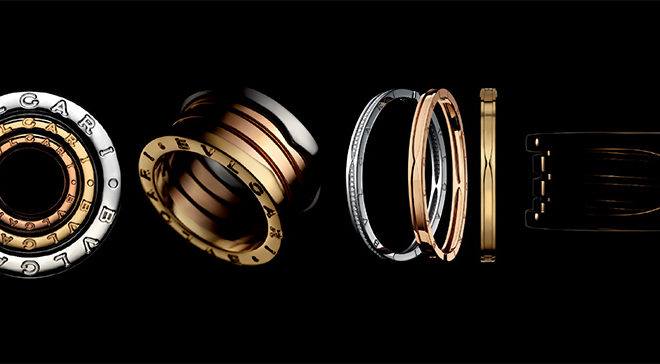 The Colosseum towers over me as I take in the view of this mammoth historical Roman structure. It is not difficult at all to see how Bulgari’s hallmark B.zero1 ring was inspired by this work of art. Its circular form is similar to the Colosseum’s elliptical shape; its sensual, fluid lines echo the amphitheatre’s different levels; and, like the ancient landmark, it is finished – on the top and at the base – with flat loops that anchor the middle.

First unveiled at the end of 1999, the B.zero1 was the most revolutionary of its kind for both Bulgari and the jewellery scene then. Not only did the ring boast a refined design that fused the Tubogas (a flexible tubular chain which Bulgari reintroduced in the ’40s) with the Italian label’s highly distinct 1934 “BVLGARI” logo, it was also crafted using an ingenious system of wrapped and interlocked metal strips that did not require any soldering.

Touted by Bulgari as the “unbroken link between past, present and future”, the B.zero1 has evolved from its original yellow and white gold guises to include refreshing, precious material combos including gold and marble, gold and ceramic, and, most recently, a mix of pink, yellow and white gold in a collection entitled Perfect Mistake. Creative director Lucia Silvestri has worked at Bulgari for 35 years and carries a Sri Lankan sapphire in her handbag as her lucky charm.

Why is Rome such a big inspiration for Bulgari?

“Rome is an open-space museum. The colors here are unique and I was born here, so there is an immediate connection to the locale. And you know, the city is so beautiful, especially the walk along Via Condotti; I see the Spanish Steps, and I tell myself ‘gosh, this is marvelous’. I see Rome in my creations for Bulgari all the time.”

Tell us about the new B.zero1 Perfect Mistake.

“In 1999, Bulgari came up with three B.zero1 designs. Two were produced – one in yellow gold and one in white gold. We also developed a prototype of the third and final design, which combined yellow, white and pink gold in one ring, just to have an idea of how it would look. But we decided it was too early to launch that piece, as the B.zero1 was so revolutionary at that time. Furthermore, we wanted to see how customers reacted to and if they would appreciate the first two colors, so we stuck with those two. The prototype was left in Bulgari’s safe for more than 10 years. This year, we thought about how we could refresh and relaunch the B.zero1, and we found this third design which had three colors. This was it!” Is the more flamboyant time we live in today a reason for Bulgari to finally launch the B.zero1 Perfect Mistake?

“Yes, that was one of the reasons! But it was also because the B.zero1 was really revolutionary at the time of its launch, and we wanted to bring back something that was slightly different but could, at the same time, reinforce the history of Bulgari.”

How did you come up with the new, slimmer bracelet for the B.zero1 range?

“I found the previous ones very bold and beautiful but, perhaps, not so easy to pull off. The new B.zero1 bracelet is more wearable and more versatile. You can wear it in one shade of gold or as a stack of white, yellow or pink.”

Who is the woman who wears the Bulgari B.zero1?

“She’s a very confident, self-assured, modern woman who has no qualms wearing more than one. Personally, I like to wear a lot of bracelets nowadays. The contemporary woman of today will walk into our boutique and buy something not only for herself, but for her daughters and nieces too – that is how timeless Bulgari’s pieces are.”