Thousands of rich Shanghai residents have turned China’s most cosmopolitan city into the luxury capital of a country that is expected to become the world’s largest market for the sector between 2012 and 2015. Shanghai topped China’s luxury market in 2010-11 with 18% of overall sales, ahead of Beijing’s 16% and the eastern city of […] 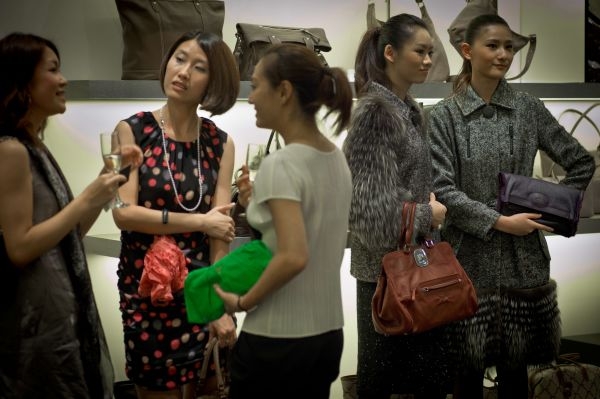 Thousands of rich Shanghai residents have turned China’s most cosmopolitan city into the luxury capital of a country that is expected to become the world’s largest market for the sector between 2012 and 2015.

Second and third-tier cities in the country are still far behind, despite boasting a growing number of wealthy people, according to the World Luxury Association.

“Shanghai is certainly the city where most luxury brands have their headquarters,” Angelica Cheung, editor of Vogue magazine in China, told AFP.

“There is a tradition — already in the twenties and thirties, Shanghainese were more into dressing stylishly,” she said.

Shanghai is also a “commercial city”, and for a long time, Beijing’s real-estate market was not ready for large luxury malls, even if that has now changed.

Shanghai counts 132,000 residents that have more than 10 million yuan ($1.6 million) at their disposal, and as such has a reservoir of customers who can spend a fortune on luxury goods — with French and Italian brands in the lead. Last week, Patrick Thomas, head of Hermes, said Shang Xia’s results were “largely above expectations” even if the brand has yet to make a profit.

At the city’s most luxurious shopping mall — the Plaza 66 — young saleswomen wearing black dresses, their hair done up in buns, and security men with ear pieces and white gloves welcome clients.

On its five floors, the world’s most prestigious brands — from Dior to Chanel, Prada to Versace, Armani to Louis Vuitton, Hugo Boss to Bulgari — compete to attract the attention of Shanghai’s wealthy.

“We don’t feel the impact of the crisis,” says the director of the Tod’s store. This is confirmed by Nicola Adamo, guest relations manager at the Dolce & Gabbana shop. “What most of them want is brand names. Money is not a problem, and if they like the brand, they can spend 100,000 yuan,” he said.

KPMG said in a recent report that one unique characteristic in China was the high number of young millionaires — “far younger than their Western counterparts,” it said.

These consumers follow fashion online, particularly on blogs. Shanghai residents have a reputation of being smarter customers who compare prices more.

They also travel a lot and buy luxury items in Hong Kong, Milan, London or Paris.