The Spring/Summer 2017 ready-to-wear shows have wrapped, and it is time to examine the key trends as seen on the runways of New York, London, Milan and Paris. 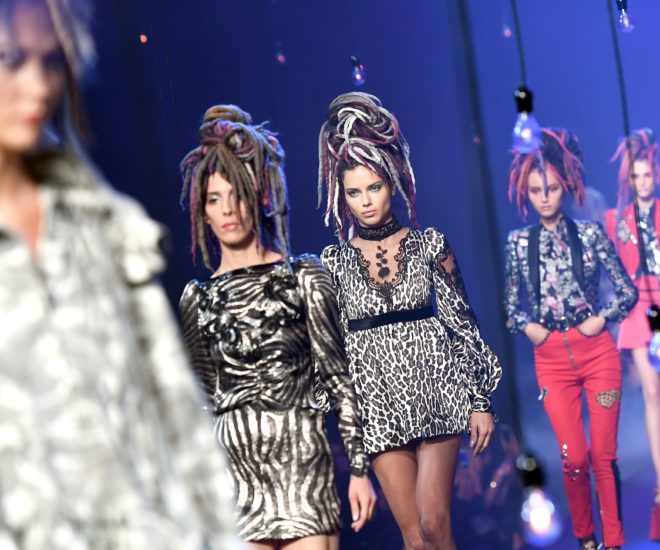 The Spring/Summer 2017 ready-to-wear shows have finally wrapped up, and it is time to examine the key trends as seen on the runways of New York, London, Milan and Paris for the upcoming season. One thing is for certain – when it comes to pattern, it is time to be bold.

There were sequins everywhere across all four cities, as cheerful designers who had obviously all been listening to the same disco studio playlist unveiled their collections. In New York, Marc Jacobs sent models down the runway in glittery mini dresses and sparkly jackets (above) while Ralph Lauren went for a luxe vibe with slinky, clingy evening gowns that caught the light. Versus Versace shimmered through London in metallic skirts and Dolce & Gabbana doused everything, from full-length coats to hot pants, in spangle in Milan. Paris was a veritable hothouse of glitter, with Elie Saab, Nina Ricci and Kenzo just a handful of the labels to indulge their festive sides. The sequin was often – but not always – accompanied by a stripe. The flattering concept appeared at Victoria Beckham and Phillip Lim in New York, where the vibe was sophisticated and laid-back, with Beckham using the technique to add depth and texture to her pieces. Burberry toyed with the idea in London and Gucci, Fendi and Missoni all made lines, whether vertical or horizontal, a priority in Milan. Gallic motifs also featured heavily in Paris, thanks to the classic French houses such as stripes Lanvin, Chloe, Courreges, Sonia Rykiel and John Galliano. Unsurprisingly, there were florals blooming all over the spring catwalks, with hordes of designers channelling their optimism into sartorial blossoms. Dolce & Gabbana led the way with loud, colorful prints, followed by the Italian heavy hitters such as Prada, Fendi and Giorgio Armani. Paul Smith’s pretty collection was garden party heaven and Phillip Lim took an elegant, ladylike approach to the look, while Michael Kors’ spin on things was flirty yet demure. Alexander McQueen designer Sarah Burton’s approach was softer, focusing on a delicate and romantic collection of whimsical dresses inspired by the wilderness.