Galliano gets the riding habit at Dior

The sound of whinnying horses and thundering hooves set the scene for Christian Dior‘s haute couture show for next summer on Monday, with its opening sequence of riding habits, a personal favourite of Monsieur Dior. Designer John Galliano’s Amazonians brandished riding crops and sported black velvet top hats with fishnet veils over their tightly-fitted jackets […] 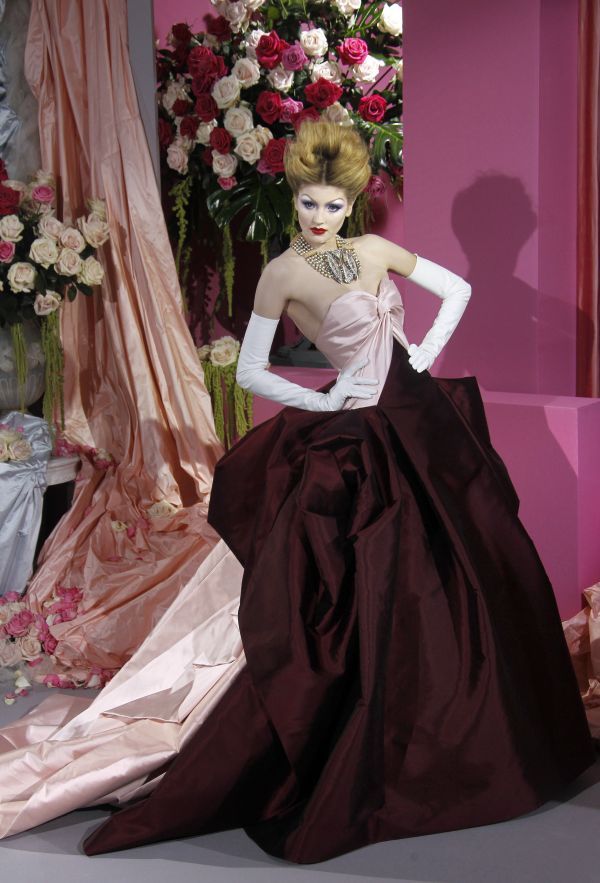 The sound of whinnying horses and thundering hooves set the scene for Christian Dior‘s haute couture show for next summer on Monday, with its opening sequence of riding habits, a personal favourite of Monsieur Dior.

In his more than 10 years tenure at Dior, Galliano keeps returning to Dior’s New Look and his “bar” jacket, this time updating it with an asymmetric cut and origami folds. His models’ whitened faces only served to increase their resemblance to geishas.

In contrast to his horsewomen, Galliano’s cocktail outfits were ultra feminine. Silk jackets bristled with faux stones and fluffy embroidery, in soft pastel shades of primrose, peach and pistachio, over skirts in layers of tulle or lace.

His finale of grand entrance ballgowns had slender bodices, emphasised by over-the-elbow evening gloves, and floor-sweeping skirts and trains. Some models needed two male assistants to help them navigate the stairs in the salons off the Champs Elysees where the show was held.

Australian singer Kylie Minogue and Hong Kong actress Maggie Cheung were among the invited guests applauding from the front row.

“The silhouettes are amazing and the colours are like the palette of a painter, perhaps (Pierre) Bonnard,” Cheung enthused.

Cream blouses and dresses in a patchwork of guipure and lace, with high collars and ruffled fronts, had a high Victorian feel.

Silhouettes were in soft focus, like his gleaming mother-of-pearl sequin trenchcoat.

Evening gowns concentrated on a palette of misty grey and dusty pastels like old rose.

His assured touch came across in his deft use of micro-pleating, for tiny fan shapes adorning an off-the-shoulder silk chiffon frock or in ruched bodices with intricate arrangements of pleated ties knotted behind.

Lebanon’s George Chakra found inspiration in gardens for his summer collection, not just in flowers but in the geometry of trellises.

Latticework tops and little evening coats were worked in rhinestones or sequins, mounted on tulle while an organza evening dress came in a delicate blue and white trellis print.

Chakra, who enjoys experimenting with new materials, this season used a silverised lace and tulle and a cellophane treated so that it does not tear and can even be over-embroidered with sequins.

Dutch designer Josephus Thimister, artistic director of Balenciaga in the 1990s, returned to the French capital after more than a decade to present the first show on the official calendar on Sunday night.

His “1915 bloodshed and opulence” collection inspired by the cataclysm of World War I in Russia mingled men’s and women’s ready-to-wear with some 16 couture pieces.

But because of his minimalist and modernist approach, it was far from evident to distinguish his couture from ready-to-wear, except for stand-out pieces like a strapless dress constructed from silver ribbons under a crumpled silver camouflage coat.