Wealthy Iranians are fuelling an unprecedented luxury car boom despite sanctions hurting their economy, paying up to $360,000 for high-end autos 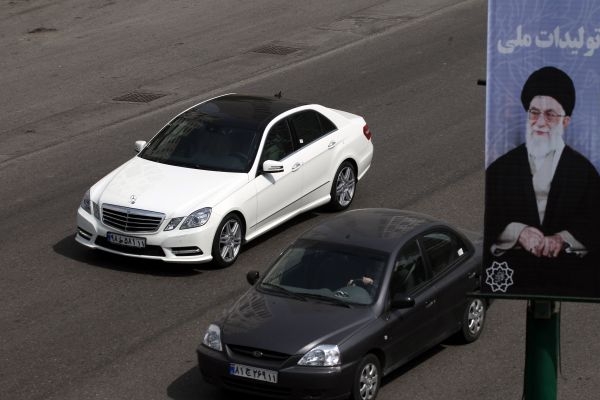 Wealthy Iranians are fuelling an unprecedented luxury car boom despite sanctions hurting their economy, paying up to $360,000 for high-end autos.

“Buyers are paying upfront for these cars, which generally cost two to three times more than abroad,” one car salesman in Tehran told AFP on condition of anonymity.

A newspaper citing official customs data, Hafte-Sobh, reported that “some 563 different Porsche models were sold in the last Iranian year (to March 2012),” worth a total $50 million before a hefty 100-percent import tax.

Porsche’s goal is to sell 800 of its cars in the Islamic republic this current Iranian year, media said, underlining the inroads the flashy German automaker is making into a niche market previously dominated by the more discreet offerings from rivals BMW and Mercedes-Benz.

Maserati, the growling musclebrand owned by Italy’s Fiat, is also looking to get a slice of the action by opening its own Tehran showroom within weeks, reports say.

The ostentatious splurge by Iran’s elite starkly contrasts with the straits experienced by ordinary Iranians.

They are confronted with inflation of over 20 percent, an estimated unemployment rate of 12-25 percent, a currency severely weakened in the past four months, and Western economic sanctions imposed to curb Tehran’s disputed nuclear programme.

While the wealthy are forking out for supercars costing between $110,000 (for an entry-level Porsche Boxster) to $360,000 (for a Porsche Panamera Turbo or a Maserati GranTurismo), working Iranians are getting by on an average monthly salary of $700.

Iran’s automobile market is highly protected against imports, allowing in only 40,000 vehicles last year, despite steadily growing demand mostly met through domestic production of some 1.6 million cars per year.

There are now an estimated 14 million vehicles on Iran’s roads, more than double the six million registered in 2005.