According to the Hugo Boss CEO, the German brand is planning to abandon its experiment with luxury branding and return to its roots in sartorial elegance. 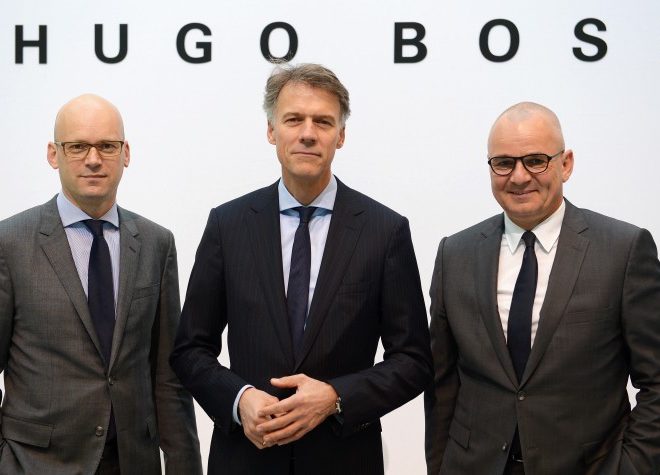 According to the new boss at Hugo Boss (no pun intended), the German brand is planning to abandon its experiment with luxury branding and return to its roots in sartorial elegance for men. This was the gist of new CEO Mark Langer’s first remarks, made to Handelsblatt, which we picked up from Channel NewsAsia. Langer is seen above with his predecessor Claus-Dietrich Lahrs (center) and Christoph Auhagen (far right) Hugo Boss board member.

We found ourselves perplexed by this, not least of all because sartorial elegance is “luxury,” after all. No one pops in at Savile Row looking for highstreet style.

Just as Handelsblatt and other observers did, we too have come to the conclusion that Langer is referring to the womenswear part of the business, which was massively expanded under previous CEO Lahrs. However, perhaps what Langer is hinting at is the “luxury everyday” aspect of the business, an art mastered by the likes of Louis Vuitton, Chanel and Rolex.

To use a watch analogy, we like to think that Hugo Boss tried to go the Rolex way but is returning to its Patek Philippe “desired by many, owned by few” approach. At least to our minds, this seems like a good option.

At the peak of Lahrs expansionist regime, Hugo Boss opened more than 400 stores worldwide; the brand reportedly has more than 6,000 points of sale in 124 countries at present. The prolonged current slump proved too much for Lahrs though as he quit in February after seeing sales figures plummet in the US and China.