Alessandro Michele unveiled his most extravagantly flamboyant Gucci collection yet on Wednesday with a pink-hued spectacular show. 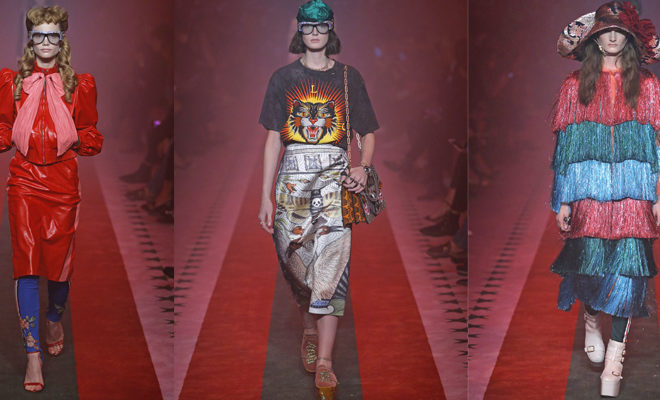 The Roman designer credited with reviving the fortunes of what was a flagging brand returned to the themes that have underpinned his turnaround and, it seemed, pushed each envelope a little further. Androgynous looks were more prevalent than ever, his trademark giant glasses more jewel-encrusted than before, the platform shoes more vertiginous and shimmering with gems. The idea, according to Michele’s notes to a show entitled “Magic Lanterns,” was to create a collection in which “the clothes tell a story steeped in wonder, phantasmagoria and unorthodoxy.” That meant, in practice, that the converted railway siding that hosted the show was done up with pink velvet banquettes to create an ambience somewhere between a super-kitsch 70s nightclub and a courtesan’s boudoir. Slippers with platform wedges were said to have been inspired by Venetian prostitutes, gowns were enriched with embroideries and ruffles and there were sparkly gold and purple leggings aplenty. Wild animals were a theme on bags and on the backs of austere tweedy jackets. Suits on the male models nearly all featured three-quarter length trousers while the bell-bottomed female versions might have been designed for a hairy-chested lothario from the early 70s. The inspirations for hairstyles were equally eclectic – spanning a range from Mork and Mindy to Marie-Antoinette. That eclecticism might have been what Michele was referring to in his notes when he explained that he was seeking to “cultivate the unexpected.” He certainly did that and star guests actress Dakota Johnson and the cellist Kelsey Lu looked impressed. But the initial online reaction was not nearly as rapturous as has been the case for Michele’s previous collections. Has he gone too far this time? Gucci’s French owners will not mind as long as sales keeping ticking up as they have done consistently under the designer’s artistic stewardship.