Not since the days of the Charge of the Light Brigade has there been such an onrush of braid, breeches and boots. 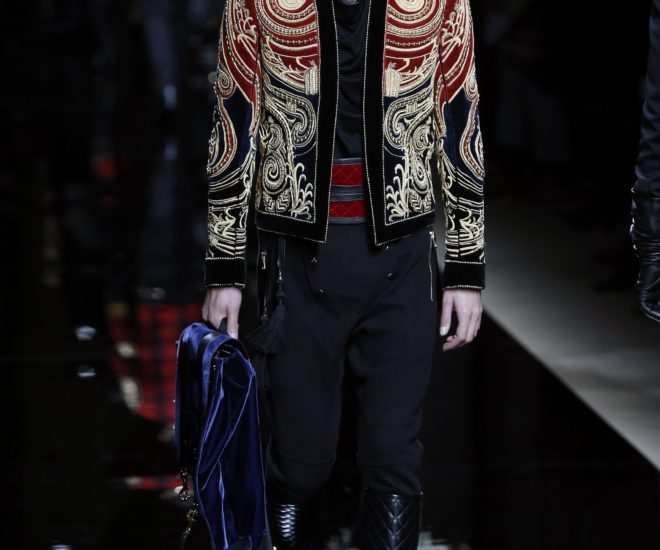 French fashion is back to its swashbuckling best and the designer leading the charge is a young mixed-race man determined to give post-attacks Paris a new swagger.

“I want to make all men feel like princes again,” Olivier Rousteing declared January 23 after his dashing, unashamedly masculine show for Balmain. Not since the days of the Charge of the Light Brigade has there been such an onrush of braid, breeches and boots.

Rousteing’s models were not the pallid sexless automatons of so many shows. Instead, they were dashing hussars and Cossack officers you half expected would pull cavalry swords from their gorgeous scarlet and leather cummerbunds as they thundered through a Parisian mansion.

Half of them looked like they had come straight from the ball the night before Waterloo in their silk and velvet breeches, with big brass-buttoned greatcoats thrown on their shoulders, and fur and tassels flying. Actually, Rousteing has delivered on this vision before, as seen below. Despite wanting the romanticism of associating the collection with some sort of defiance against terror, the cavalry has clearly been waiting in the wings for Balmain for some time. “Paris is the City of Light and those lights should continue to shine,” the 30-year-old designer, a favorite of pop divas Beyonce and Rihanna, told AFP.

“I want to bring back the dream and beauty that is Paris… and make all men feel like princes again. I want to show the diversity and colors of France and to show that Paris has a past, a present and it will have a future,” he added.

Rousteing (pictured above and below), who was adopted by his white parents when he was a one-year-old, said his show was an ode to the racial and cultural diversity of the French capital.

A symphony orchestra, playing live to a hip-hop soundtrack, provided the musical tone.

“Mixing Kanye West and Rihanna with a symphony orchestra is my universe. I am French in a French fashion house with a couture tradition which also has a very international influence. That for me is Paris – it is that internationalism and the richness of the mixing of cultures. “This singular eagerness to embrace a diversity of cultures and ideas… enrages intolerant minds both here and abroad,” he said.

An Internet darling, with 2.1 million Instagram followers, Rousteing has become a reference for stars as diverse as Jane Fonda and Nicki Minaj, who even rapped on the venerable couture brand’s name as sales have soared.

Rousteing’s high-cheekboned good looks, social media savvy and friendships with stars such as West and his wife Kim Kardashian has led to him being called a “selfie-made man” – a joke he appears to delight in.

Earlier in the day there was a similar defiance against giving in to fear after the November massacres from Dior’s Kris Van Assche. Leading the charge for the Dior man was the millionaire skateboarder, as seen below. Old World cavalry officers were a no-show at Dior Homme.

Although much of his collection was in black, it was not the black of mourning, Assche insisted.

“The events mean that we have to be stronger to make people dream. The darkness is so omnipresent that as a designer who have to go further. You need more power and strength,” he told AFP.

“In fact I like the idea of darkness pushing creativity,” he said, echoing the sombre luxuriance of Dries Van Noten stand-out line, and fellow Belgian creator Walter Van Beirendonck, whose show was simply called “Woest”, which means furious in Flemish. Paris-based label Etudes – whose studio is near the Bataclan concert hall were 90 people died in November’s attacks – seemed almost to be on a war footing in their Saturday show, with a collection largely comprised of military-inspired and camouflage outfits, fighter pilot fatigues and parachute suits.

There was a similar ready-for-anything air in newcomers OAMC, whose nifty high-end functional streetwear is also created only a few blocks away and is replete with the spirit of Parisian resistance.

But if you were looking for a sign that “Paris will always be Paris”, look no further than the Hermes show on Saturday night. All the elements of ineffable casual French style were there, the discreet charm of the bourgeoisie personified.

Only that dried-blood red, a color that crops up across the collections like a wound, would lead you to believe that anything untoward had happened.