Balenciaga revealed its first campaign – starring Kristen McMenamy – since the installment of Alexander Wang as the fashion house’s creative director. 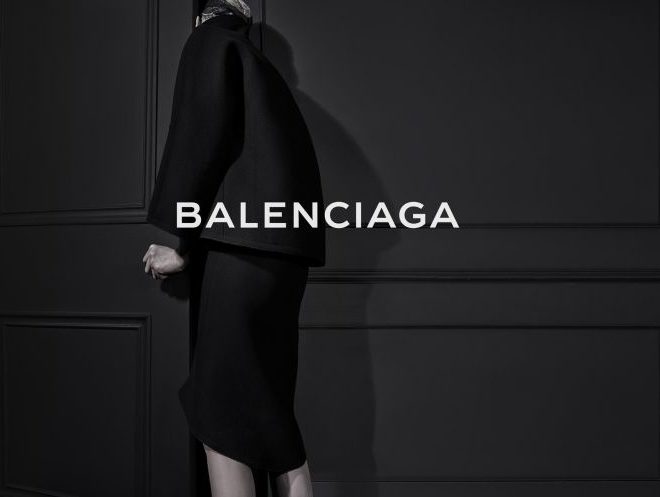 The new creative director of the Parisian design house has gone for a moody black and white look for his Fall/Winter 2013 campaign.

Fashion fans were excited to see his debut collection; now there’s an exclusive image from the first advertising campaign by Alexander Wang for Balenciaga.

Unveiled on the brand’s Facebook page, the black and white image is the first teaser of a print campaign which is due to hit magazines this June.

Wang spoke about the “cinematic” campaign to WWD. Famed fashion photographer Steven Klein shot the images, which feature veteran American model Kristen McMenamy (whose face is hidden in an attempt to focus the attention on the details of the clothes). According to Wang the pair “were the perfect team to illustrate this idea.”

Meanwhile, Monday in an exclusive interview except published by The Business of Fashion, the former creative director Nicolas Ghesquière (and Wang’s immediate predecessor) spoke out about his reasons for leaving the brand which had undegone a renaissance under his 15-year-long stewardship.

He criticized Balenciaga for its approach to expanding the company: “they wanted to open up a load of stores but in really mediocre spaces, where people weren’t aware of the brand.”

“I began to feel as though I was being sucked dry, like they wanted to steal my identity while trying to homogenize things. It just wasn’t fulfilling anymore,” he added.

The full interview will appear in the debut issue of System Magazine, which hits newsstands this week.