Designers put up ambiguous borders in their collections this season. Here are the best bits from the recent Fashion Weeks. 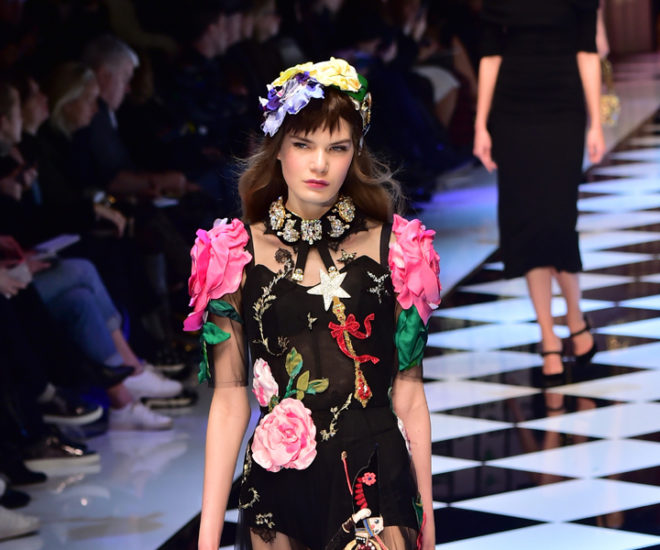 The end of fashion collection shows in New York, London, Milan and Paris, completes the full range of Autumn/Winter 2016-17 trends. With the fashion world still split on whether pieces in collections should go for sale immediately during the season or whether a delay is required to make the best of what they have, it seems that some designers are inspired by this tussle to mix it up a bit. Spring styles seemed to have bled a bit into Winter, among other stylistic ambiguities that made for an interesting series of Fashion Weeks. Dark and neutral shades such beige, white, brown, black, and blue are the normal palette staples for a wintry and cool hue but this time, spring came through. The cool hues were still dominant but lighter melds and more springlike tones intruded. Liselore Frowijn, Chanel, Fendi, Gucci and Francesco Scognamiglio cheered winter up with pastel explosions, bolder brights, and gay color. New York, though, stood apart from the rest, as, other than a few (notably Michael Kors), that Fashion Week kept to the dark, muted palette.

Blue is the new Black From petrol blue to pastel blue; from midnight and electric blue to navy and lavender – all these served as counterpoints to timeless black. Versace, Diesel Black Gold and Fendi went big on blue while Rahul Mishra, Eudon Choi, Marni, Dolce & Gabbana, and Missoni presented looks in the color or used blue in smaller touches. Just see how much blue you can spot in this very story!

Denim, normally a famous blue, was less present than previous seasons but still featured in collections from Chanel, Stella McCartney, Blumarine and Ujoh. Continuing the eccentric vibe of the season are eyecatching embellishments mixed with outstanding patterns sitting alongside and contrasting with minimalist designs. Such occurs normally with the clash of multiple trends but in this case such details featured in almost all labels’ collection to some extent. Dolce & Gabbana flashed it up with diamanté, alongside golden, mirror-effect embellishments and metallic Lurex while Saint Laurent used bold detail in a different way more suited to the collection’s retro stylings. Fur in color was another staple among labels, whether finished with multi-colored horizontal stripes or vivid shades verging on the fluroscent, or packed with prints. Fendi set the tone with pieces, detailing and accessories all made from brightly colored fur while Ermanno Scervino brought smaller touches of it to hoods and collars. Ellery finished fur in red, pink and burgundy, while Saint Laurent went for electric shades. To combat the cold, coats, jackets, parkas and down jackets are firm fixtures of the season. Going the whole range from classical and functional to extravagant, outerwear this season is sure to fit all kinds of tastes, leaving something for everyone. Zips were a key feature for many, sometimes used as embellishment, but other times allowing big coats transform into lightweight outdoor garments. One key trend — seen in particular at Léa Peckre, Burberry and Narciso Rodriguez — is a masculine coat with a long, wide cut, worn over a lightweight dress, a sure sign of designers thinking beyond traditional seasons. Oversized coats will be big news this winter but down jackets and parkas with touches of fur or color — as spotted at 3.1 Phillip Lim and Rag&Bone — will be popular too. Chanel went for a more classic, highly feminine padded jacket.

Beyond the seasonal mix-up came unisex silhouettes and garments inspired by menswear. On the whole, though, the trend was still highly feminine looks with a few masculine details. Collections involved in the masculine/feminine trend include Paul Smith, John Galliano, Paul & Joe and Victoria Beckham. Some showed suit jackets with big shoulders and wide-cut trousers. Lots of other labels though — like Gucci, Mugler and Elie Saab — previewed more feminine, sensual collections. Lingerie and sleepwear made their appearance on the runways as outerwear in autumn/winter collections. Lingerie-style dresses worn under thick, heavy coats, like at Sonia Rykiel, as well as dressing gowns and pajama pants were also spotted on the catwalk for a laid-back daytime look. This trend was mostly seen on the Italian catwalk, at Trussardi, Missoni, Gucci and Roberto Cavalli. Other designers rode on a sailor or seafaring theme with sweaters, pants and sailor-style buttoning, all in a palette of navy blue, red and yellow. Cédric Charlier went particularly big on sailor chic in a collection inspired by old photos of retro seamen. Y/Project, Prada and Tommy Hilfiger also showed nautical looks. Wide, baggy, and even oversized pants were prominent, although skinny cuts were still present. Chalayan went for wide-cut leather pants, Jacquemus matched them with a huge-shouldered XXL jacket, Giorgio Armani printed them with patterns and Ralph Lauren gave them a high waist. Shiatzy Chen, on the other hand, had loose-cut pants with patterns and transparent effects. Some brought hints of a sporty style to their autumn/winter collections, while others jumped into sportswear head first. Among those adding a few sportswear pieces to feminine, urban collections, or leaving discreet touches of sportiness are Carven, Alexis Mabille, Alexander Wang and, of course, Tommy Hilfiger. There were some interesting collaborations in the sportswear arena too, such as Fenty x Puma by Rihanna.

All images are courtesy of AFP.