Luxury fragrance brand Kilian has released a line named In the Garden of Good and Evil, the perfect fragrances for celebrating the Year of the Snake. 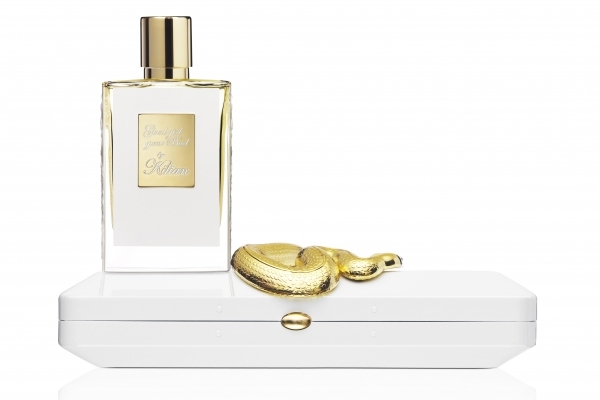 Luxury fragrance brand Kilian has released a line of perfumes named In the Garden of Good and Evil — the perfect fragrances for celebrating 2013, the Year of the Snake.

Luxury perfumier Kilian’s collection In the Garden of Good and Evil is packed full of Western mythology, but the charming snake-covered packaging will have a new lease of life when the clock strikes 12 midnight on February 10.

Released in November 2012, the three new Killian perfumes were apparently created under the influence of some forbidden fruit.

In the City of Sin is a spicy, fruity and woody concoction, Good Girl Gone Bad is floral and fruity and Forbidden Games plays with fruits, rose and amber. The three scents are available in 50ml bottles and retail at €195 via a select list of luxury retailers.

They’ve got some pedigree behind them. Forbidden Games and In the City of Sin were both created by Calice Becker, the nose behind Marc Jacobs’s Lola and Calvin Klein’s Secret Obsession.

The delicately engraved bottle features a pair of intertwined snakes, a door, an apple and a vine on a white and gold bottle.

According to the brand, the snakes symbolize fallen lovers, the door is the route to paradise and an opening to infinite possibilities, the apple is the symbol of original sin, and the vine represents life and Dionysean pleasure.

The Art Deco-inspired box is designed to bring to mind an old cigarette case and is embellished with a lavish gold serpent again signifying sin and temptation.

From February onwards, this golden serpent will be imbued with the influence and insight of the Water Snake, at least according to the Chinese Zodiac.

Luxury brand Kilian was launched in 2007 and now features 19 scents as well as a range of luxury clutches. Famed for its “eco-luxe” philosophy, the label offers bottles can be hand-refilled and kept for a lifetime.