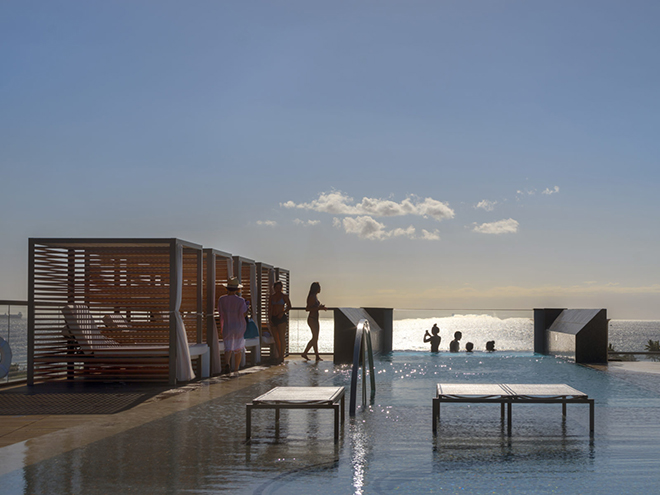 Completed October 2017, Anaha is a luxury real estate development in Honolulu, Hawaii and is the 2nd tower completed as part of Howard Hughes Corporation’s Ward Village master plan. A luxury condo located in Honolulu’s most distinguished urban neighborhood, Anaha is designed by Chicago-based Solomon Cordwell Buenz in partnership with Benjamin Woo Architects as a 311 residence luxury real estate development with a diverse portfolio of services and amenities, as well as a master-planned community that offers a wealth of shops, restaurants, entertainment options, and artfully designed public spaces; but it is its glass bottomed pool, dangling 23 metres above the ground that is going to be the new architectural trend for luxurious high rises.

For a long time, Singapore’s Marina Bay Sands Infinity Pool, nestled atop three towers (and subject of National Geographics Mega-structures series) was considered the gold standard for instagram worthy pools. But lately, glass bottomed pools like the one which forms a main draw of appeal for Honolulu’s Anaha luxury condominium are but one of many in a string of similar designs proposed or completed around the world. 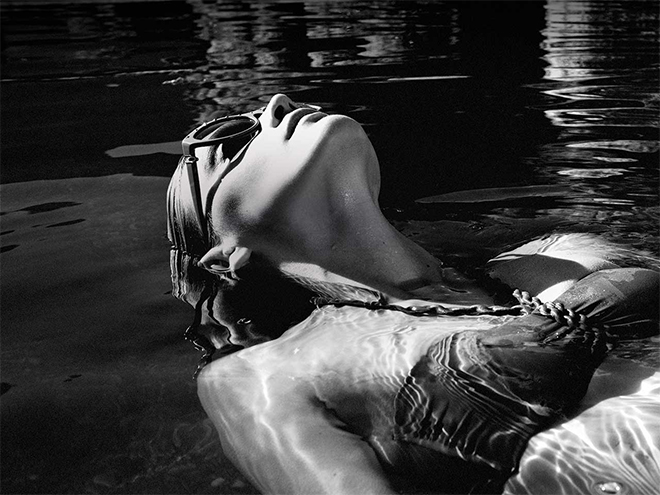 “The composition is reminiscent of the play between the crests and troughs of a calm ocean wave; like a wave, the reflection of light off the facade will constantly alter as the viewpoint and environmental conditions change.” – Architect’s statement on Anaha tower, Honolulu 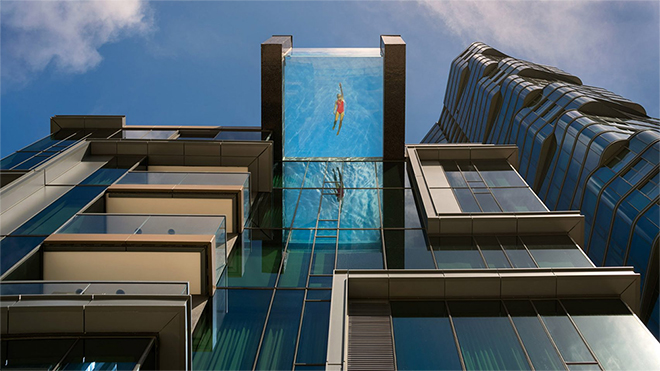 But cantilevered straight off the edge of the roof top!

The 38 storey Anaha tower showcases an aesthetically complementary green-blue glass cladding which mirrors the Pacific Ocean it faces right down to voluminous curving walls which a meant to mimic the look of pacific ocean waves, rising 122 metres. It is one of the most sophisticated and design-forward towers on O‘ahu.

Even land-locked Texas is not immune to the growing trend of glass bottom sky pools. Market Square Tower, a luxury apartment complex in Houston is but one of the latest worldwide luxury real estate developments to feature the aquatic dare-devil’s dream. 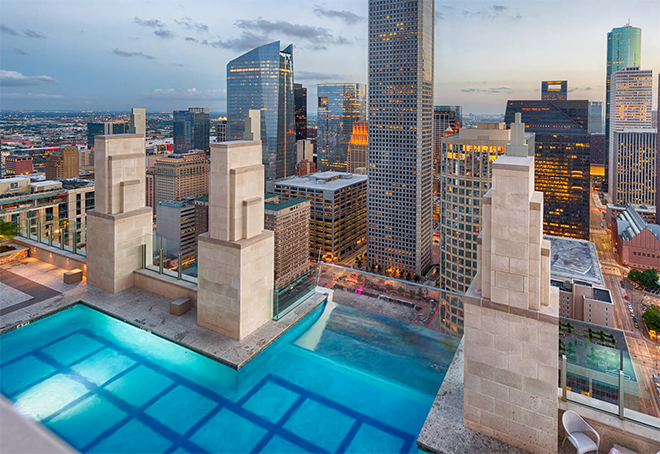 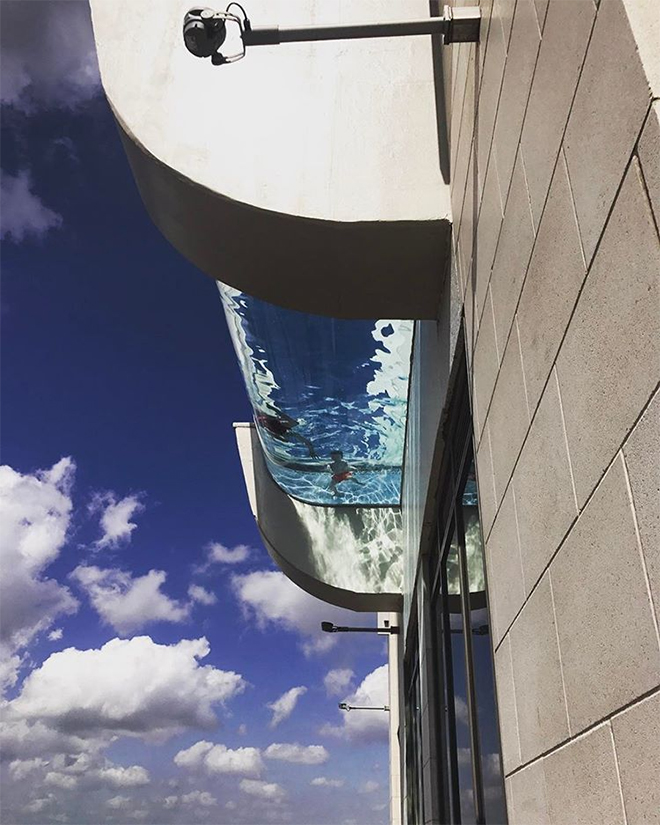 until admired from below!

Another luxury real estate development that isn’t exactly sea-side or ocean-adjacent, is a new residential development in London with a similar glass bottomed sky pools, this time, it’s not even cantilevered off the edge of the building but rather – a connective “bridge” between two towers of Embassy Gardens, a namesake luxury condo of the riverside district in the heart of Nine Elms and a short walk from Battersea Power Station. 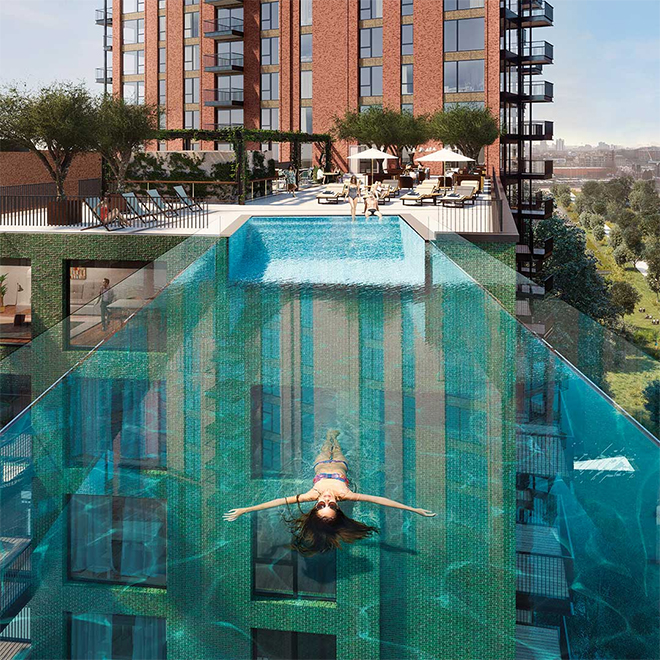 Launched in 2018, Embassy Gardens condo consists of two residential skyscrapers with a sky pool connecting these superstructures at their apex. The 25 metre long, 3 metre deep glass bottomed pool joining the twin towers comprising of 2000 million to 7 million dollar apartments will allow members of South Bank’s jewel in the crown to swim hair-raisingly, ten storeys up in the sky. 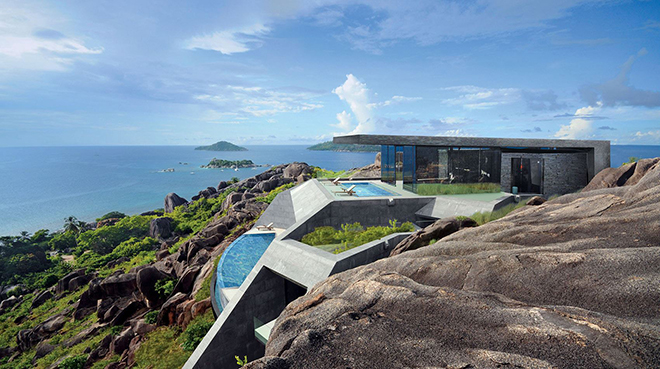 Even landed real estate developments are not immune from the glass bottom pool trend, seventeen villas on the private island of Félicité in the Indian Ocean each have their own rooftop pool but the best was saved for an epic bi-level villa. RHE’s Residence One is one of the 17 hilltop contemporary villas of Zil Pasyon, an exclusive resort located on on Félicité island in the Seychelles. Its master suite features its own glass bottomed pool doubling as a skylight into the living area or as entertainment if you’re the voyeuristic sort. Not to be outdone, the Wall House is another villa real estate development with a generously opulent water feature as well. 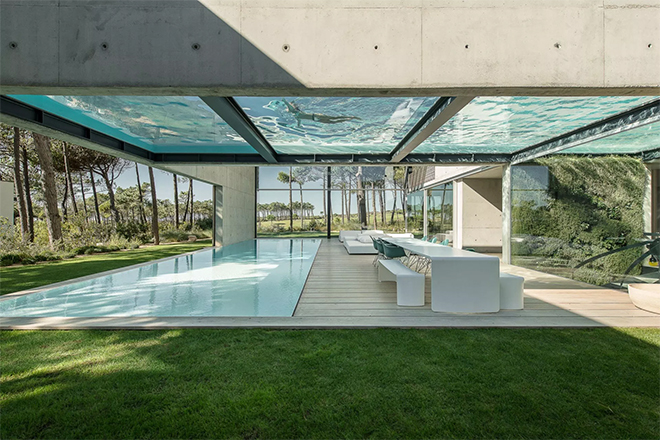 Located in a region known as the Portuguese Riviera, the Wall House is a stunning luxury villa on Portugal’s Estoril Coast with exquisitely contemporary sculpture of modern architecture. While no less voyeuristic, the glass bottomed pool of the Wall House extends more towards the outer areas of the house rather than as a skylight feature of the living area like RHE’s Residence One on the private island of Félicité. 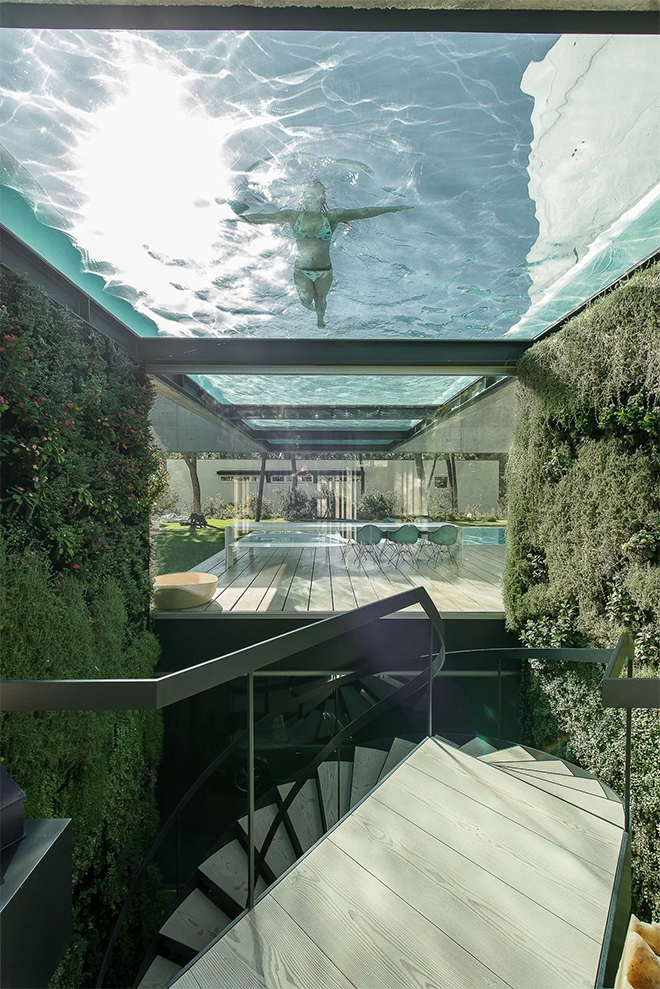