One Sydney Harbour Adds Glitz to One Barangaroo Strip

One Sydney Harbour was definitely not conceived in a day because behind its arresting architecture is none other than the preeminent Pritzker Prize winner Renzo Piano. He snagged this accolade in 1998 for his work at Kansai International Airport in Japan. He’s also well-known for his work on The Shard in London, the United Kingdom which was developed in 2012. 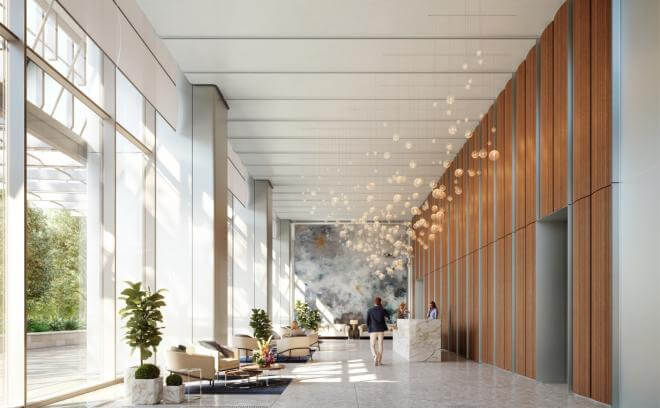 For One Sydney Harbour, this stalwart in architecture drew his inspiration from looking out at the views of the glistening harbour especially when sun rays reflected on the waves. His idea was simple — to design an elegant building that will reflect and shimmer the sparkling water of Sydney Harbour. In each unit, the views would embrace the vistas and allow its residents to appreciate the harbour’s iconic landscape.

In addition, Piano’s Midas Touch ensures unique treatments for each tower. A key architectural feature is how different levels of reflectivity can be seen at different times of the day. This would make it appear like a shimmery crystal when it catches the light. Piano also affirms that the views to the north are the most breathtaking as one can take in the scenes of the Harbour Bridge and Opera House, not forgetting, looking west across Darling Harbour, there is also a glimpse of the blue mountains. 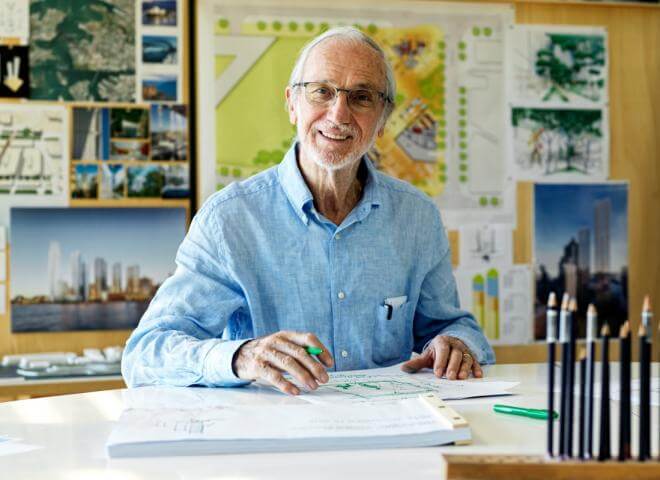 If your pecuniary capabilities are not limited, then the flagship penthouse ticks all the right boxes in terms of voluminous spaces, luxury at every corner, enviable views, and full access to a volley of amenities such as a private roof-top pool, spa and gymnasium, to name a few. This 17,000-square-foot penthouse with 8-metre-high ceilings actually spans the top three floors of One Sydney Harbour’s three luxury residential towers. 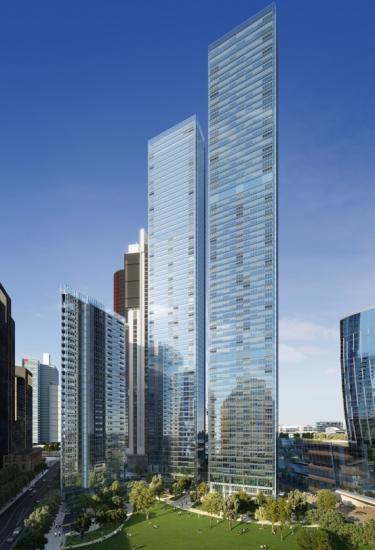 “We’ve been overwhelmed by the interest we’ve received. Not only have we secured more than A$140 million with the penthouse sale, but a further seven whole floor apartments have been sold, proving there is significant depth in the super-luxury apartment market in Australia,” says Ben Christie, Global Head of Product and Sales, Lendlease.

However, the tallest of the three structures in the One Sydney Harbour development rises 247 metres, while the second and third tower stands at 230 and 104 metres, respectively. With the current Australian property boom, One Sydney Harbour at Barangaroo South is reaping off-market sales success in this exclusive address. In late January 2020, approximately 85 per cent of apartments in Residences One have been sold via an exclusive off-market campaign buoyed by strong local customers. Interestingly, the striking 68-storey Residences Two will offer 322 apartments comprising configurations of full-floor and part-floor homes, along with one-, two- and three-bedroom configurations. By 2025, all three towers would be completed, offering 801 apartments in total.

The piece de resistance of One Sydney Harbour is the “Skyhomes” penthouses in Residences Two curated by State of Craft’s Creative Director, Daniel Goldberg. The Goldberg + Piano partnership is in its third successful collaboration. Previously, they worked on The Shard and Shard Palace in 2012. In truth, the penthouse’s bespoke design will make this project Australia’s most expensive property. Goldberg’s attention to detail is palpable once you enter the Skyhomes. He quipped that the penthouse design was “inspired by life onboard private yachts”.

Once you set foot inside, you’ll immediately appreciate his touch on hunting down locally sourced materials such as unique hand-cut stone to the patina of timber; both of which create warmth through the space while creating an atmosphere of sophistication and elegance.

“All places have a story to tell, you just have to listen to that story and I think Sydney has a great story to tell. We immediately started to think about these buildings being like crystals, playing one to the other. In this case, I think it’s very much about this, about making something that tells the essence of this city that is about a sense of lightness, a sense of light, the sense of transparency.” — Renzo Piano, Chairman and Founding Partner of Renzo Piano Building Workshop

Situated at the top two floors of Residences Two, the future resident will enjoy full floors spanning 5,815 to 7,215 square feet with 3-metre-high ceilings throughout. Each Skyhome will have a private lift lobby and access to the rooftop terrace with a space catering to the owner’s whims on entertaining friends, plus a swimming pool to indulge in. These “Sky Terraces” will range from 861 to 1,185 square feet and offer stunning panoramic views of Sydney Harbour and the Blue Mountains framing the backdrop. 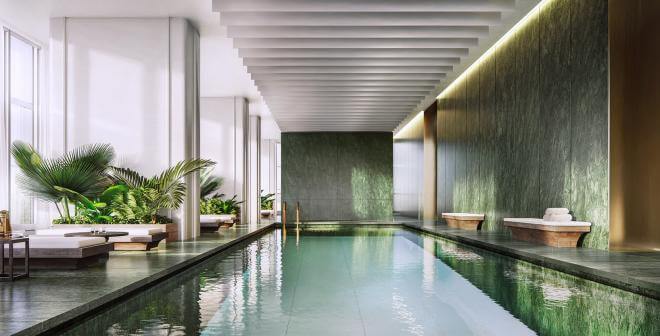 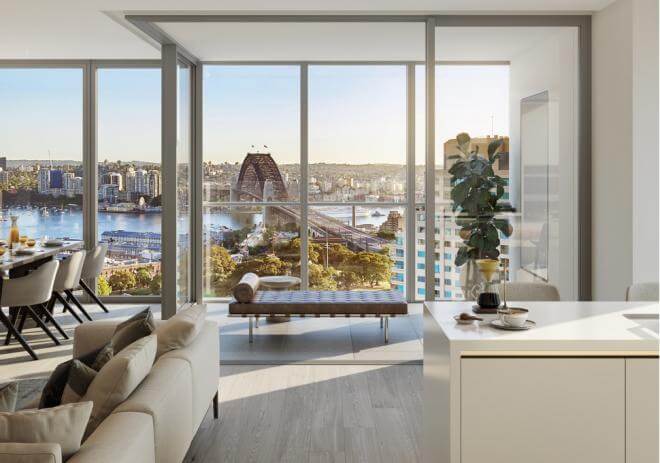 View of the Sydney Harbour from the kitchen

“We wanted to create two unique, world-class homes in the sky that capture the essence of living high above Sydney Harbour. The experience of being in the Skyhomes was inspired by life on board private yachts with their seamless transition from inside to outside spaces, and the feeling of freedom and elegant comfort.” — Daniel Goldberg, Founder and Creative Director – State of Craft.

READ MORE: How Sydney is becoming a placemaking city

Future residents of this property will have easy access to the Barangaroo station precinct as part of the Sydney metro. Undoubtedly, there will be other public transport routes available. For residents to indulge in some weekend spoils, world-class waterfront dining options will be offered simply by venturing downstairs. The F&B options are complemented by a selection of boutique stores to elevate the lifestyle experience. Not to be missed is Waterman’s Cove which is an amphitheatre-style boardwalk on the water where the panoramic views will engage your senses. One Sydney Harbour is all set to be the prestigious new kid on the block along the One Barangaroo strip!

For more information about One Sydney Harbour, click here.