Creative design is transforming once forgotten neighbourhoods into highly sought after avenues, streets and boulevards. Old is being unified with the new and with that, creating a style that is shaping contemporary architecture in many of the world’s greatest cities. 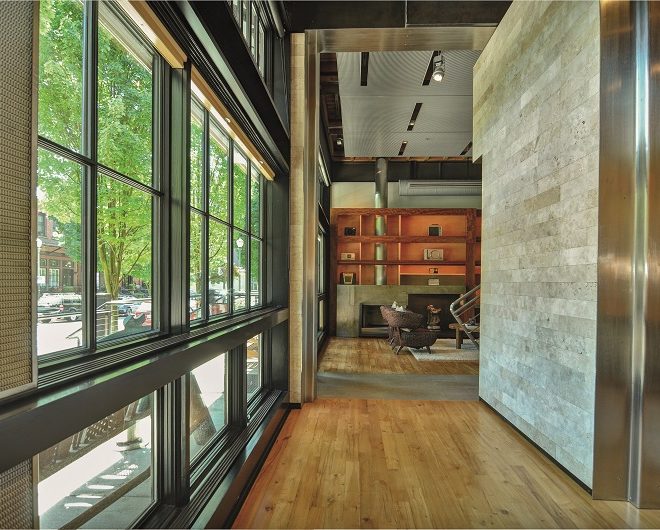 As prime real estate becomes scarce and a reverse influx of people are moving from the suburbs back into the city centre. Many cities around the world are redeveloping their abandoned industrial sites into highly sought after developments. These up and coming neighbourhoods are now some of the go to places for art, culture, food, shopping and residential real estate.

Through massive redevelopment projects, London and Sydney are leading the way. However, there are a few smaller cities hosting incredibly designed projects. With their own rich and diverse history, Portland, Oregon and Tallinn, Estonia, should not be missed.

Many of these locations were once very important areas in the city, that had, until recently, seen better days. With lower prices in these central locations, young entrepreneurs have started to move in and renew the area with help from their local government. From tech start ups in London to coffee houses in Portland. This wave of regeneration shares similarities across the globe. As more and more money pours into these areas, the quality of the property and the expectations of it’s inhabitants improves.

London has gone through its fair share of regeneration over the past several decades. From Notting Hill in the west, to the Tate Modern changing the entire South Bank, to the upcoming Battersea Power Station, bringing new life to South West London. Arguably though, the biggest and most drastic change has been to East London. Stretching around the City, to Canary Wharf and the Docklands, large scale residential and commercial projects have drastically morphed this dying industrial centre into one of London’s most sought after postcodes. Low costs and central locations have meant that once derelict warehouse, breweries and factories have been revamped and renovated into luxury flats and homes. While luxury skyscrapers have risen from foggy swamp lands.

Within walking distance to the City and located in the Borough of Hackney, Shoreditch and Hoxton remain the most popular and successful examples of gentrification within East London. Small Victorian lanes play home to boutique shops, trendy cafes, chic eateries and international hotels. A bustling tech and art scene has seen a return of the creative types from around the world and inspired some of the finest examples of modern design in urban living, Europe has to offer.  A return that has been hundreds of years in the making, establishing East London as one of the most attractive places to invest in property in the city.

According to Knight Frank, the London property agency, Shoreditch in particular has seen prices increase 46% over the past 3 years. Investors looking for the most luxurious of urban living, should look no further than what Shoreditch does best. Converting listed properties into stylish residences, paying homage to their former selves. Refurbished in 2001, this three-story designer penthouse has been extended twice, including adding two upper floors, combining contemporary architecture with warehouse elements. This includes a glass box on the sixth floor, with the added benefits of a second kitchen and entertaining area. A sixty-foot raw concrete staircase, one of two, rises up to the glass box. With 360 degree views of London that can be enjoyed indoors, while sliding glass doors lead out to a south facing terrace featuring a Jacuzzi, pond and barbeque. In sticking with the industrial feel of the building and materials such as glass, steel and raw cement were used. Uniquely offset by oak, limestone and walnut to create visually unique and impacting penthouse.

With an abundance of impeccable coffee shops, art galleries, posh food carts and farmer’s markets galore, Portland, Oregon has undergone a vast renewal. First starting in the mid 1980’s and then with the viaduct removed in the 1990’s, Downtown Portland was opened up for commercial and residential use. Now it’s slowly starting to embrace its industrial past, in a new light. The most sought after area in downtown Portland is the Pearl District. It’s namesake, said to come from Chinese seafarers that hid pearls beneath cobble-stoned Twelfth Street is a designers dream. Incredible warehouses converted into luxury townhouses and high-rise condominiums now line the once barren streets. A true urban tale of regeneration, where brick mingles with its modern glass counterpart. One of the most liveable cities in America, Portland has outperformed most of the U.S. in the real estate market. Nearing 8% year-on-year growth, Portland offers incredible value with excellent high end properties to be acquired. Built in 1908 and spanning 3,888 sq. ft., this historic building now showcases one of the most luxurious town homes in Portland. Originally a warehouse for the Spokane, Portland and Seattle Railway and located in the heart of the Pearl District, minutes from NW 23 Ave. This evolving property was created by famed designer Jeff Lamb and features three bedrooms, two baths, two half baths, three fireplaces and four private parking spaces. With floating glass stairs, crimped metal ceilings, exposed brick and exotic woods, it’s the epitome of modern, urban design.

Nestled along the southern coast of the Gulf of Finland lies the capital of Estonia, Tallinn. With it’s mixture of medieval, Soviet and modern architecture, Tallinn is a feast for the eyes for design enthusiasts. Dating back to 1154, Tallinn was extremely important as a trade city, connecting Western and Northern Europe with Russia. Today the city is enjoying a renaissance. After claiming independence in the early 90’s, the country and Tallinn most importantly has become a tech and business powerhouse in Northern Europe. Companies such as Skype, TransferWise and Playtech originate from the capital.

In the centre of the city, a stones throw away from the Old Town UNESCO world heritage site, sits The Rotermannn Quarter. Developed during the 19th Century by Christian Barthold Rotermann as an industrial site with multiple factories, mills and plants, the quarter today has gone through a major regeneration. Branded as Rotermann City, the area now hosts a number of converted historic buildings and new construction following a contemporary design.

With property prices increasing above the 8% mark, Tallinn has seen an incredible recovery from it’s previous lows during the recession. The newly designed R18 development at Rotermann City features 48 apartments ranging between 506 sq. ft. and 1,615 sq.ft. Apartments on the upper floors feature 12 ft. high ceilings with rooftop terraces overlooking the Old Town and Baltic Sea. It was designed by famed architects Hanno Grossschmidt and Tomomi Hayashi. There’s underground parking, exclusive shops and restaurants within one of the most sought after areas in the city.

Travelling south, just 4km from Sydney’s Central Business District, you reach Alexandria. A mainly light industrial use area, the neighbourhood is full of old factories and warehouses. At it’s peak in the 1940’s, there were 550 factories manufacturing everything from bricks to aircraft. Due to it’s central location, Alexandria is going through a renewal process that is blending the old with the new. Named after the British military victory at Alexandria in 1801 during the French Revolutionary Wars. Today the inner city suburb is full of creative types, carving out their own niche part of Sydney. The most famous destinations being the artsy café’s and markets such as The Grounds. Started by Caroline Choker, the interior designer and co-owner who turned the pie factory into something straight off the streets of Brooklyn.

Much like the commercial side of the neighbourhood, the residential properties have changed drastically over the past decade and it shows. Alexandria’s 10-year growth was 141.1% ‘til summer 2015 according to Domain Group senior economist Dr. Andrew Wilson. High-rise apartments sit side by side Victorian and Art Deco style homes, while once busy warehouses are now loft conversions.

Cheap prices a decade ago brought in investors who couldn’t afford the city’s more expensive neighbourhoods, but still wanted the proximity to the city. Initially commercial space was the first to go. Businesses started relocating there and then restaurants, shops and houses started being renovated. Not only is Alexandria near to the CBD it is also well connected to the airport and a short walk to Sydney Park.

A similar story pertains to Newtown. Located 4km south-west of the CBD and near the University of Sydney, Newtown has seen its streets rejuvenated and its property prices grow substantially because of it. Originally set forth as a farming and residential area when founded in the 19th century. Row houses or terrace houses were built to accommodate residents. Many of whom would later be immigrants from a war torn Europe. Today a melting pot of different nationalities, students and professionals, Newtown has seen it’s once run down buildings renovated into beautiful and historically significant homes. From Newton Station, to King Street and surrounding areas, you’ll find the largest concentration of theatres, art spaces and live music in Sydney. According to Property Value, median home prices grew 26.50% in Newtown in the past 12 months.

Urban renewal projects have a lot of similarities no matter where they are in the world. They are chosen for their central locations and cost. The architecture is a blend of industrial and contemporary, while their residents come from backgrounds just as diverse. The popularity of living in urban renewal projects has grown exponentially over the past several years. With that popularity has come, not only an increase in quality, but also an increase in price. Today, as more and more areas are regenerated, these are by far the best places in any city to see the greatest returns on your investment, while also being an exciting place to live. Built in the 1880’s, this two-story Victorian terrace home stands on a 2,260 sq. ft. block and consists of three bedrooms and two bathrooms. The property features aspects of the original architecture with modern amenities. Paved alfresco dining embodies the rear of the property with a Jacuzzi, while the front has an iron laced façade on a tree lined street. Inside you’ll find wooden floors, open fireplaces and wide French doors leading to large bedrooms and spacious balconies.