Casa Casuarina, the famed South Beach mansion once owned by Italian designer Gianni Versace, is back on the market with a price tag of $125 million. 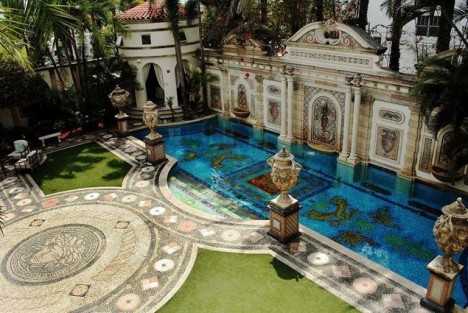 Casa Casuarina, the Miami Beach, Fla., house once owned by late fashion designer Gianni Versace, is on the market for $125 million.

According to the announcement, the house features 10 bedrooms, 11 baths embellished with Italian marble, an Observatory room and a huge pool. Mr. Versace bought the home and its adjacent lot in 1992 for just under $10 million and then invested another $33 million in the property, adding a 6,100-square-foot south wing, a 54-foot-long mosaic-tiled pool lined with 24-karat gold, a mosaic-covered courtyard and frescoes on the home’s walls and ceilings. In addition, “Casa Casuarina” is facing the Atlantic Ocean, so the owners can enjoy unique views from their rooms. Peter Loftin, a telecom entrepreneur, purchased the property in 2000 for $20 million. After using it as a residence for several years, Mr. Loftin turned the home into a boutique hotel with a restaurant and opened it in late 2009 as the Villa by Barton G.