A cascade of red rose petals, cheers and loud applause on Thursday heralded the full reopening this weekend of Mumbai’s Taj Mahal Palace hotel, over 18 months after it was stormed by Islamist militants. The 107-year-old heritage wing of the luxury seafront hotel will receive guests from Sunday — Indian Independence Day — for the […] 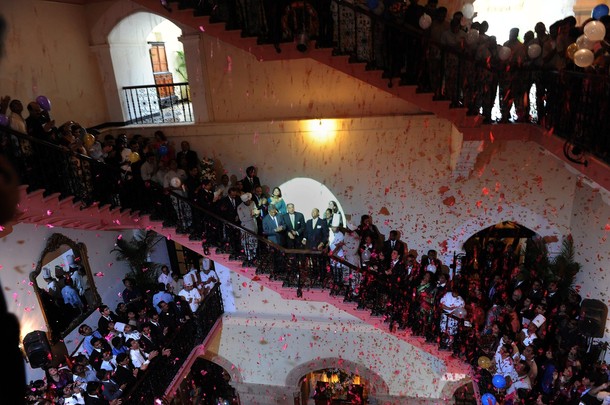 A cascade of red rose petals, cheers and loud applause on Thursday heralded the full reopening this weekend of Mumbai’s Taj Mahal Palace hotel, over 18 months after it was stormed by Islamist militants.

The 107-year-old heritage wing of the luxury seafront hotel will receive guests from Sunday — Indian Independence Day — for the first time since it was badly damaged by fire, smoke and explosions in the deadly 60-hour siege.

A total of 1.75 billion rupees (37.3 million dollars) has been spent repairing, restoring and upgrading the wing, Anil Goel, executive director of finance at the Indian Hotels Company, which owns the Taj, told a news conference.

The work has been partly paid for through a 1.8-billion-rupee insurance payout for damage to property and loss of business, he added. Ratan Tata, head of the Tata Group parent company, posed with staff on the grand cantilever staircase under the hotel’s iconic red dome, which dramatically caught fire in the battle between gunmen and security forces.

“This is a very special occasion,” he told employees looking over the wrought-iron balustrades.

“This company and this flagship property, this honourable old lady, is going to reopen in the splendour it has enjoyed for over a century.”

A total of 31 people died, including 12 members of staff, when heavily-armed gunman stormed the hotel on the evening of November 26, 2008 and fought a fierce battle to the death with crack commandos. The attack was part of a co-ordinated assault by 10 gunmen on two other luxury hotels, a popular tourist restaurant, Jewish centre and the city’s main railway station that left 166 people dead and more than 300 others injured.

The modern Tower wing of the Taj and the Trident hotel reopened within a month of the attacks, while the Oberoi hotel, which was reduced to a shell in the siege, reopened in April this year. Raymond Bickson, the Indian Hotels Company managing director and chief executive, told reporters that a “cast of thousands” had been working around the clock to get the wing and its 285 rooms ready for reopening.

A team of 20 consultants from Britain, Italy, Singapore, the United States and India has helped restore artwork and antique furniture damaged in the attacks, as well as redesign and upgrade fixtures and fittings, he added. Legend has it that the Taj Mahal Palace was commissioned by Tata Group founder Jamsetji Nusserwanji Tata after he was refused entry to the now-defunct Apollo Hotel, which had a strict Europeans-only policy. It has since become a symbol of national pride for Indians and the epitome of cosmopolitan sophistication, playing host to monarchs, world leaders and famous figures.

Bickson said the restoration work was helped by the solid structure of the building, which minimised the damage.

“Some of these walls are two feet (0.6 metres) thick. In reality it held up extremely well through all that,” he said. The group’s sales and marketing head, Ajoy K. Misra, said some guests who were staying at the hotel on the night of the attacks had booked to return on Sunday, without elaborating on how many.

Overall occupancy in the hotel since the attacks has been about 70 percent, he added.

Goel said a further insurance claim for the 12 months to November 2009 was being finalised but the company itself would have to absorb the loss of business and the cost of keeping on staff since then.