Belles lettres-inspired hotels are catching on in Paris, and Les Plumes and Le Marcel, which opened in late June, are the latest newcomers to the club. 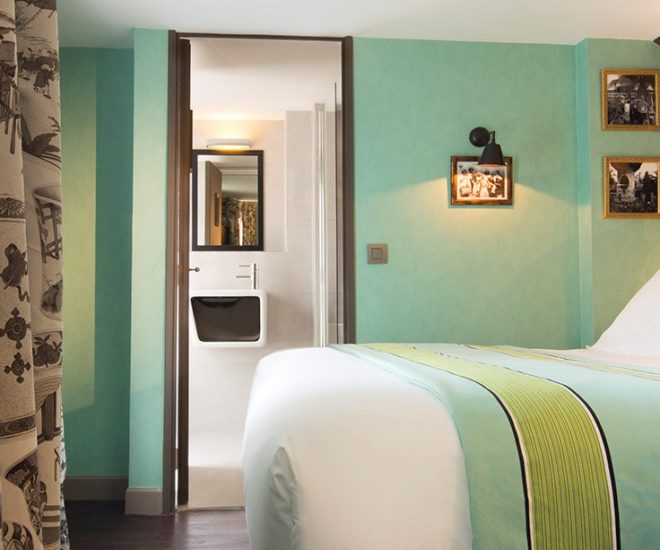 Belles lettres-inspired hotels are catching on in Paris, and Les Plumes and Le Marcel, which opened in late June, are the latest newcomers to the club. Proust, Kipling, George Sand et al.: the spirit of the great writers permeates these charming establishments in the heart of the capital. Here’s a selection: Opened in 2010 near the French president’s office at the Élysée, this 4-star hotel pays tribute to a pantheon of great literary figures. Each of the 26 rooms is inspired by a different famous author, with representative passages actually printed on the walls, ranging from Andersen to Zola, via Kafka and Shakespeare. Each room’s décor elegantly evokes the style and atmosphere of the author’s times. The very address of this hotel in the 9th arrondissement — on the Rue Lamartine, named after French Romantic poet Alphonse de Lamartine — marks it out for its literary vocation.

A blend of posh 19th-century Romanticism and modernism, Les Plumes conjures up the amorous passions of Juliette Drouet and Victor Hugo, Paul Verlaine and Arthur Rimbaud, George Sand and Alfred de Musset. With cushions bearing the names of these famous lovers, and decor including printed portraits and quotes, these three suites are full of winks and allusions to their literary love affairs. This 4-star establishment in the busy Gare de l’Est neighborhood is steeped in remembrances of things past. Tranquility is writ large in the soft bright colors of its modern décor, designed by Claudia Del Bubba. The rooms, named after Proust’s dramatis personae Guermantes, Swann, Madeleine or Marcel, conjure up the French novelist’s world of languorous reminiscence. Opened this March in “South Pigalle,” a trendifying neighborhood south of Montmartre and Pigalle, the R. Kipling immerses you in the world of this widely-travelled writer from Bombay in British India.

The lobby, replete with library, steamer trunks and leather Chesterfield sofas, has a cozy out-and-out British colonial atmosphere. The rooms evoke the novelist’s travels in Asia.