World’s largest floating hotel due to open in 2012 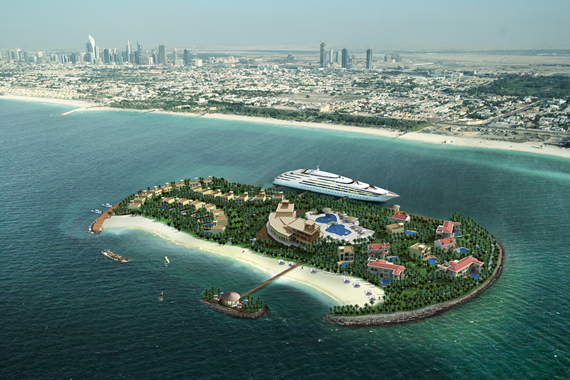 The Aquiva is expected to be the world’s largest pleasure boat.

It will enable hotel guests to obtain a flavour of the mega-yacht lifestyle when it is moored amid what today is a semi-derelict London landscape of warehouses and building sites.

Accommodating 300 guests and due to open in 2012, the yacht will offer views of the skyscrapers of Canary Wharf in addition to the distinctive spikes of the O2 Millennium Dome.

The boat, whose design is said to be inspired by the sail-shaped Burj Dubai hotel, will dwarf other giant craft such as the 531ft Dubai, owned by the emirate’s ruler, Sheikh Mohammed bin Rashid al-Maktoum.

Unlike normal yachts, the Aquiva will have no engine, relying on tugs to tow it into place.

It will have to squeeze through locks connecting the Thames to South Dock where it will be permanently moored in time for the 2012 Olympics.

Where most mega-yachts would feature the captain’s bridge, the Aquiva will instead boast a presidential suite. The vessel will have seven decks and sit 75ft above the waterline.

Every suite will have its own Jacuzzi and – for days when the wind is not howling in off the North Sea – a private barbecue with a chef is available as well as sun decks.

A fleet of Venetian-style water taxis will be on hand to whisk guests to and from the office blocks at nearby Canary Wharf, some of the Olympic locations and other Thames-side destinations.
Queen Elizabeth 2)

“We’re aiming for six stars but with the economic climate we might have to settle for five. Either way the rooms will be spectacular.

It’s going to be the height of luxury.” Rupert Mann, the interior designer responsible for decorating the yacht, said.