Sunreef yachts not only win awards, they also come up with new models to target power and sailing yachting enthusiasts.

The 40 Open Sunreef Power Diamond Limited Edition has been recognised as Best Power Driven Catamaran at the prestigious World Yachts Trophies gala which was held on the Beach of the Intercontinental Carlton Cannes on 15 September. The award was received on stage by company Founder and President Francis Lapp, Nicolas Lapp – Head of Sunreef Yachts Design Office, Paulina Zelobowska and Karolina Paszkiewicz from Sales and Marketing Departments. 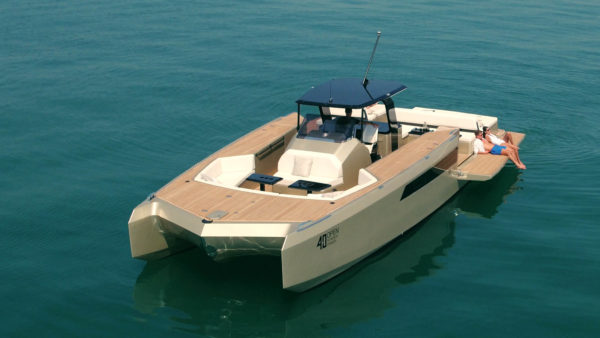 The 40 Open Sunreef Power Diamond Limited Edition is an ultramodern day cruiser equipped with 2 x Mercury Racing 860 HP engines and featuring a Sun King Diamond Coating by Jean Boulle Luxury. Vast, stable and fully customisable, this radical multihull speedster is all about lifestyle and performance. This is the model’s second big international triumph after winning the Best Recreational Boat up to 45-feet title at the Asia Boating Awards during the Singapore Yacht Show in April. The 40 Open Sunreef Power Diamond Limited Edition will make its presence felt at the Monaco Yacht Show 2018 from 26 to 29 September. It will tranport VIPs and journalists to this prestigious international yachting event and will be situated at stand AL 30, Port Hercules, Superyacht Pavilion.

Sunreef 80 Sail
Dubbed the 7X, it is the first hull in Sunreef Yachts’ Sunreef 80 range of sailing catamarans that has been photographed undertaking sea trials. The first 24.4-metre yacht of the series was put through her paces for the first time in the Baltic Sea. It comes after the yacht was debuted earlier this year, alongside the 18.3-metre Sunreef 60, at the Polish shipyard’s Pomorskie Rendezvous in Gdansk. The Sunreef 80 made its appearance at the Cannes Yachting Festival. The 7X offers a four-cabin configuration and interior finessed by details such as metallic accents, backlit quartz and teak wood. It even has a master suite with its own superyacht office. The crew quarters allows for a staff of up to five people, depending on the layout selected. Many people are floored by the spacious open-plan saloon located on the main deck. This elegant yacht flaunts a wetbar, barbecue area, sundeck with Jacuzzi and hardtop Bimini with glass inserts. In fact, the vessel was the star of the Pomorskie Rendez-Vous 2018 all thanks to its 300 sqm of living space! 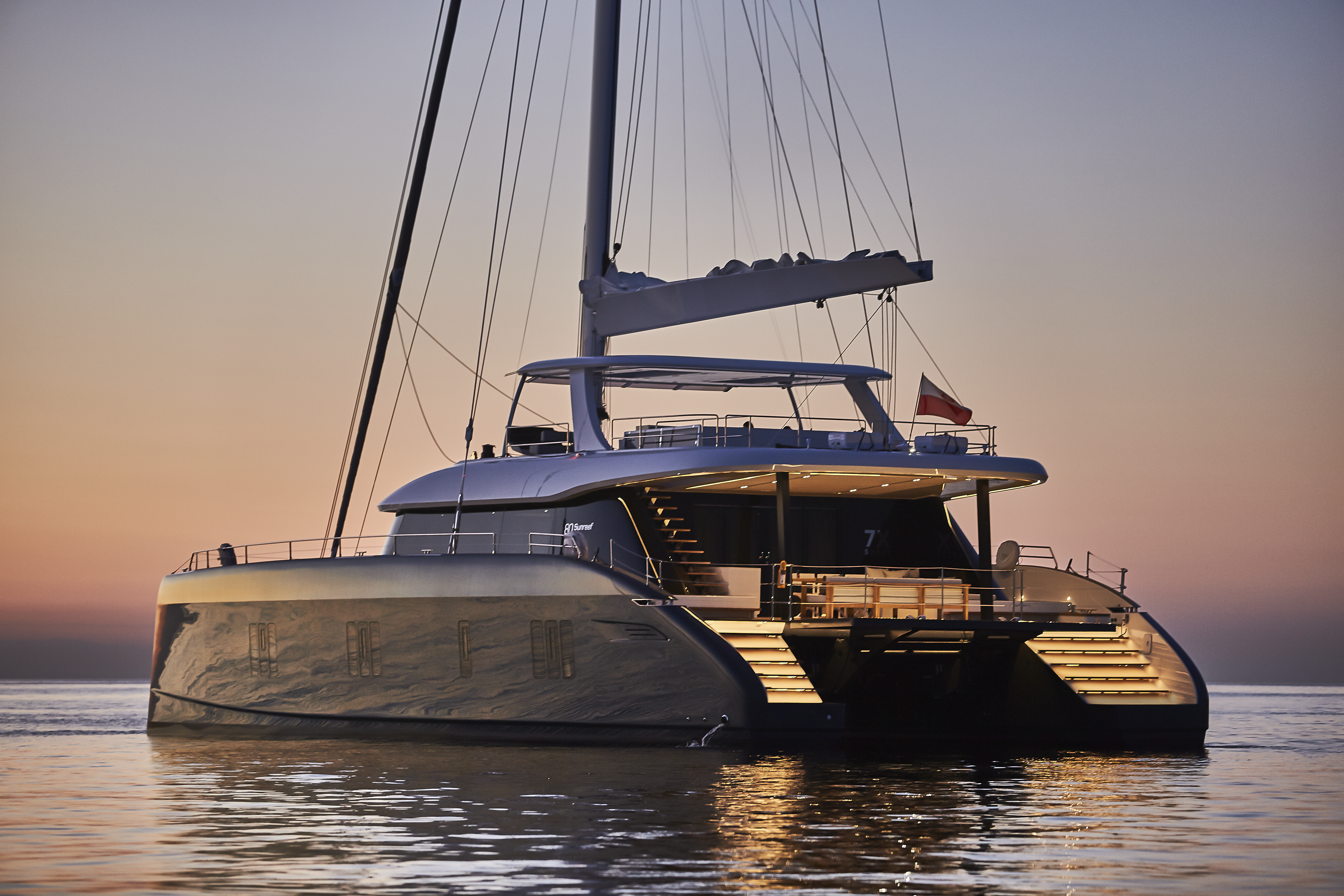 Sunreef 80 Power
The Sunreef 80 is an all-around sailing leisure yacht ideal for exclusive getaways, charter and oceanic escapades. This model boasts a combination of exterior and interior areas easily flowing into one another. A clever bridge deck and superstructure design allow for a superior level of comfort onboard whereas the generous teak use, high bulwarks and classy lines underscore her modern style with a classic edge. Reimagined with a new superstructure concept, the Sunreef 80 gains a saloon plan with an outstanding potential for customisation. A vast, central lounging space with a panoramic view and endless layout possibilities, it opens both onto the bow terrace and cockpit. The bow benefits from a cosy lounge, well shielded from sun and wind. To the aft, the saloon merges with the generous cockpit extended with a large aft platform. All the areas combined form a universal, open environment where flexibility and freedom reign. While housing the main helm, the 54-sqm flybridge is definitely dedicated to leisure with more than enough space for movable furniture, a Jacuzzi, fully-equipped wet bar, a barbecue and large sunpads. The hulls provide impressive volumes to set up a custom layout including airy, luxurious guest cabins and an opulent master suite with a walk-in dressing, desk, sofa, retractable TV and an immense bathroom. A perfect setting to unwind and relax after a long day in the sun.

Sunreef 60 Power
The fourth edition of the Pomorskie Rendez-Vous held in Gdansk, Poland also witnessed the debut of the Sunreef 60 dubbed Feel the Blue. This alluring yacht offers a five-cabin layout with great outdoor lounging spaces. The yacht’s custom-tailored decor fuses light blue, grey and white tones for a contemporary marine look. This power catamaran is compact and easy to manipulate while its seaworthiness and performance draw praises from its fans. With a range up to 3000-3500 nautical miles on cruising speed, the 60 Sunreef Power is also very stable even in heavy weather conditions. Her very shallow draft gives her the possibility to approach remote areas, inaccessible for other yachts. Her roomy interiors can be laid-out and custom-designed to fit every owner’s preferences. The living space available provides for full privacy of the guests and includes a spectacular Owner’s cabin in the front with a panoramic view. The exterior lounging areas are generous and feature a 38-sqm cockpit and a 32-sqm flybridge housing the upper helm station. She can also be fitted with options like an aft hydraulic platform, wave piercers, a jet-ski crane or a Jacuzzi placed on the flybridge. 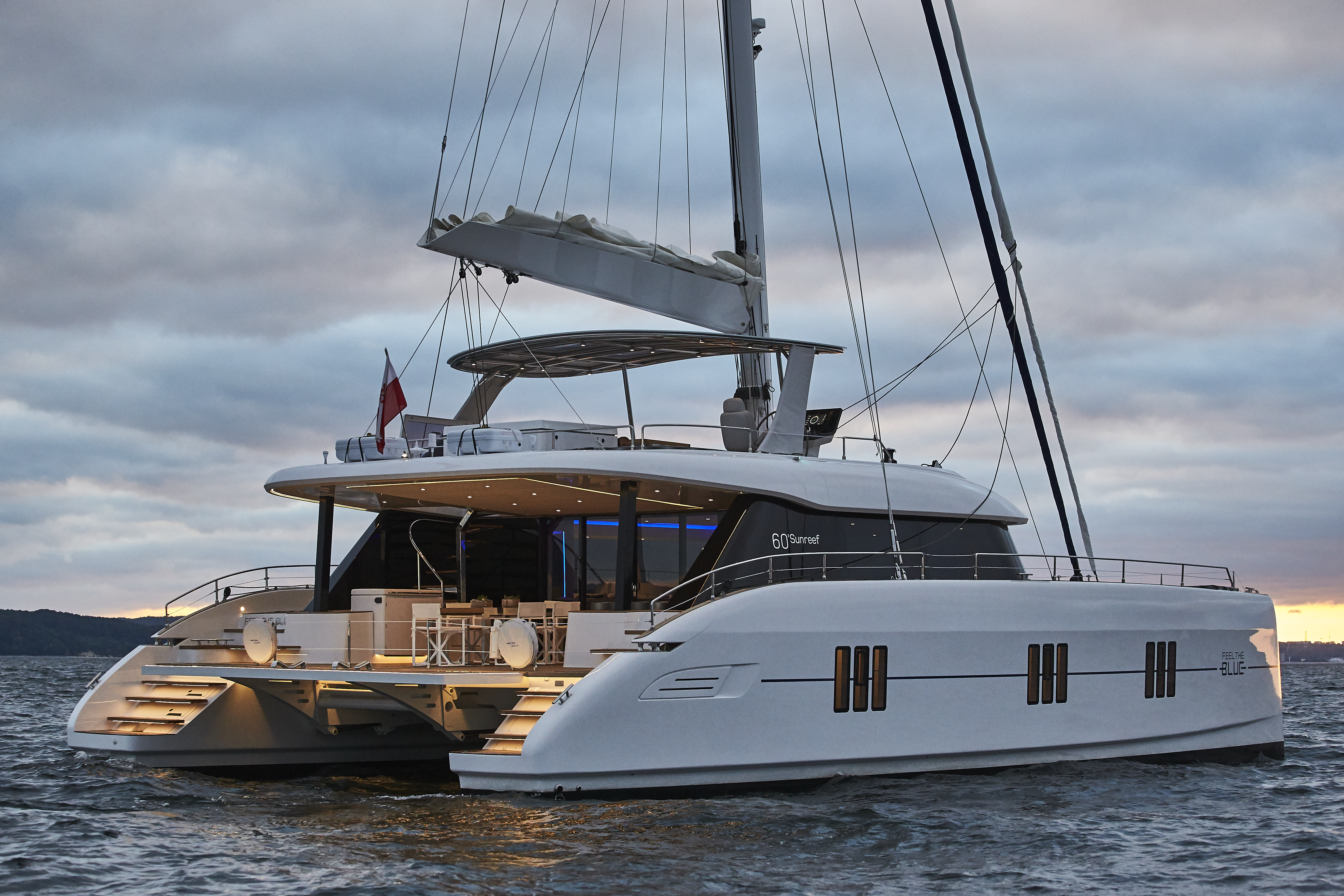