This quick 55-footer will get you there in comfort, proving in the process that three engines are better than two, not just for obvious reasons. 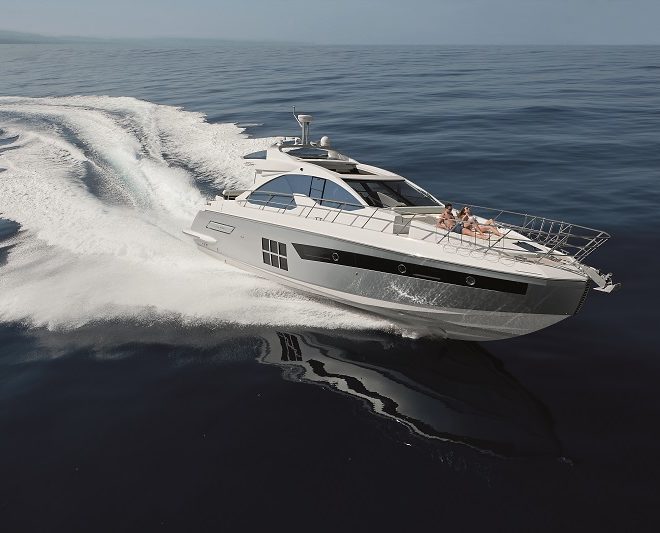 Not one, not two, but three Volvo IPS engines power this sleek and elegant 55ft yacht up to its top speed: a slightly scary 35kts. Its tearing cruising speed of 30kts isn’t any stroll with a zimmer frame either, but you won’t get very far at that speed – perhaps 230nm. Slow right down to granny-fetching-the-milk-speed and you’ll get 1000nm of range, but at 7kts it will take a while. This reviewer isn’t fashionably green – rather inclined to put the hammer down and see what it can do, frankly. It has to be fun, chucking something half again as long as a London bus around at 35knots, and I can’t wait to have a go when we do the sea trial. She isn’t just a flighty piece of stuff though. There’s some serious stuff twixt bow and stern, although looking at the deck layouts you could be excused for thinking they have left out the engine room. They haven’t: it’s below the cockpit and the garage, and in addition to the three engines (did I mention there were three engines?) there’s a genset, the A/C equipment and the hot water heater and all the modern paraphernalia that goes with a top-end high performance boat.

The garage is wide, if shallow, with lots of room for some toys as well as the substantial rib. The single crew berth is crammed into the forepeak, leaving lots of room for the three cabins; two double and one twin and the two heads, one of which is en-suite to the owner’s cabin, placed further aft than usual in this class of boat. On the main deck, unusually, the cockpit is not accessed from both sides of the swim platform. The port steps connect directly to the port gangway, leading all the way to the bow. The cockpit seating takes advantage of this extra space, and extends round at 90 degrees to the rearmost bench which (by lowering the table and putting cushions on top) becomes extra-deep, giving a degree of intimacy and comfort often missing on boats of this size.

The galley is long and thin and placed against the starboard wall facing the seating area which doubles as the dining table using some innovative furniture. Just forward of this, the helm station is on starboard with a couple of seats beside it on port for guests to keep the helmsman company. The foredeck is long, and there’s room for the entire boat’s complement to sit or lounge in comfort. And that’s it, no upper deck or flybridge, but despite this there’s plenty of room, helped by all the clever tricks with the furniture, and the sliding doors to the rear of the saloon that seem to disappear, creating a much larger contiguous space.

Her lines are distinctive, particularly the snub-nosed bow which perhaps only Azimut could get away with for a go-faster boat of this class. As you might expect, weight is at a premium if you want to make something this big go as fast as it does. The superstructure is carbon fiber, and the story behind the three engines is that three give the same power as two bigger ones but at a lower weight for the same power output. There’s a saving of almost one tonne. More to the point though, and fully-exploited in the design, is that the three smaller engines take up three feet less of length space than the equivalent, larger, twins would. That’s three feet across the widest part of the boat, and it has been given to the sleeping accommodation.