A duo of recently-launched motor yacht models by renowned French shipyard Jeanneau, each in the 34-35ft range, are proving very popular dayboat or overnight options in Asia. The boats in question, Leader 33 and Merry Fisher 1095, have more in common than length and an almost 11ft beam, yet some distinct differences might sway a potential owner one way or the other. 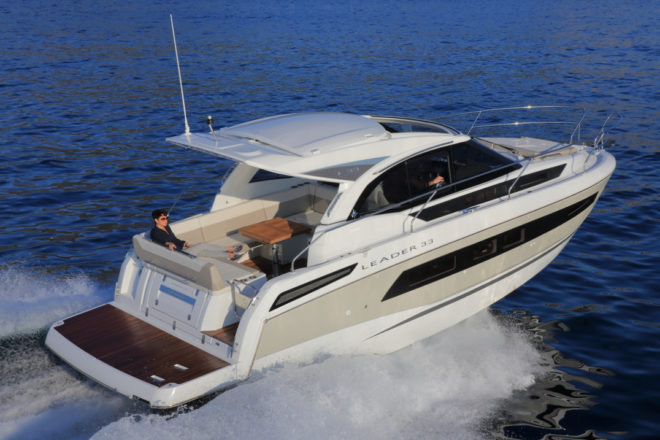 Some in Asia’s yachting circles still wonder if this region will welcome the growing global embrace of outboard engines in power boats under 40ft.

However, several builders are confident that the convenience  of outboard engine accessibility, more servicing and repair options around the region, and less-perceptible vibration than inboard motors – as well as far fewer decibels than outboards of old – will win hearts here.

Leader, Jeanneau’s high-end sport boat range, has traditionally been one of the brand’s two inboard ranges, with NC, and our review boat had twin Volvo Penta D3-220s inboards and an overall length of 34ft 8in. However, Jeanneau launched twin-outboard versions of both the Leader 30 and 33 in 2019, offering another appealing option. 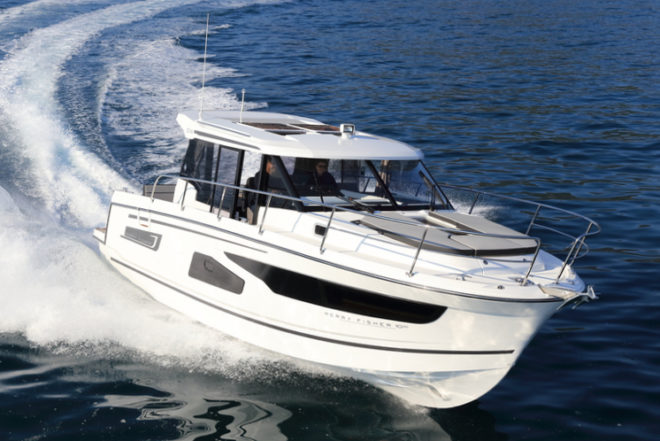 The Merry Fisher 1095 has an LOA of 34ft 5in, very similar to the Leader 33; the MF1095 (below) can have a separated aft area when the saloon doors are closed 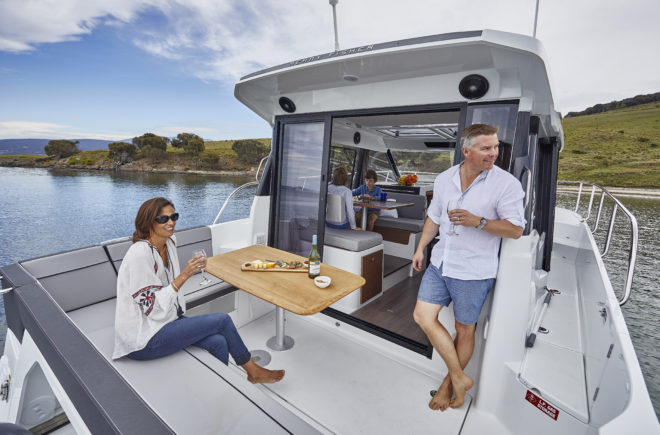 Merry Fisher, like Cap Camarat, is an outboard range and its flagship 1095 was released in 2018, followed by a new flybridge version that was unveiled at the Cannes Yachting Festival last September.

The two Jeanneau models, as seen in Hong Kong, have a couple of notable differences at the outset. As an express boat, the Leader 33 has a few more curves – both inside and out – that accentuate its sportier persona. The Merry Fisher 1095 is not short of pleasing lines, but mostly to give it a slight touch of contemporary aesthetics that both models share.

The most immediate contrast is the Leader’s completely open aft, versus an enclosable one on the Merry Fisher behind the sliding saloon doors. 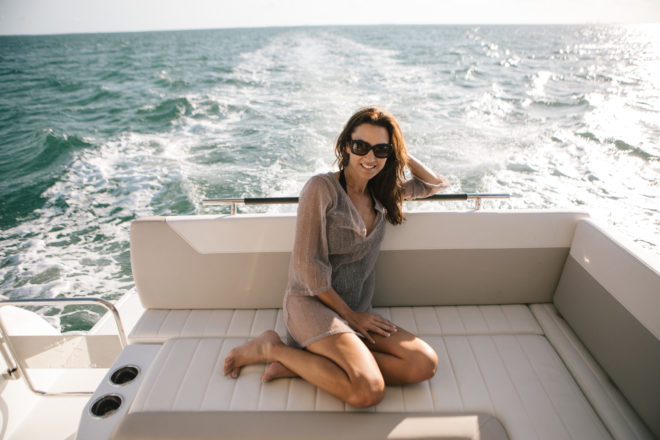 The cockpits on both the Leader 33 (above) and Merry Fisher 1095 (below) have modular seating, easily adjusted for extra space or a change of direction 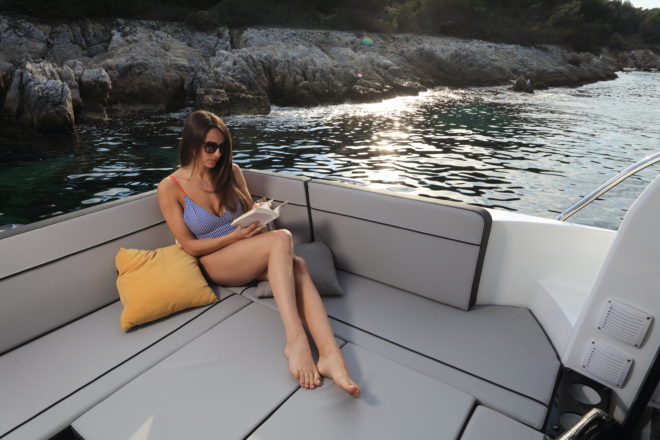 Both aft areas have notably generous cushioned seating and easy-to-operate pivoting bench seats that transform into wide padded sunbathing platforms, or can switch direction from being forward-facing to taking in vistas from the stern.

“I think this size is great,” says Mathilde Delfour, Jeanneau’s Asia-Pacific Sales Manager, aboard the Leader 33 as we pull out of Club Marina Cove in Sai Kung under a clear blue sky on mostly calm ocean waters.

“The main deck is like a large platform that’s open to the outside, allowing people to enjoy the boat, so suits entertaining. It could be centred on sunbathing and swimming or for sitting around the table socialising. And you can be under the roof in air-conditioning if it gets too hot. People can also take it out for one or two nights, as it has two cabins and a good galley.”

The Leader 33 really does feel like it could be a party boat – standard-fitted sunken audio speakers appear throughout the main and lower decks, while a wet bar and basin, opposite the main deck’s extendable table, a metre or so behind the helm, augments a full galley on the lower deck. 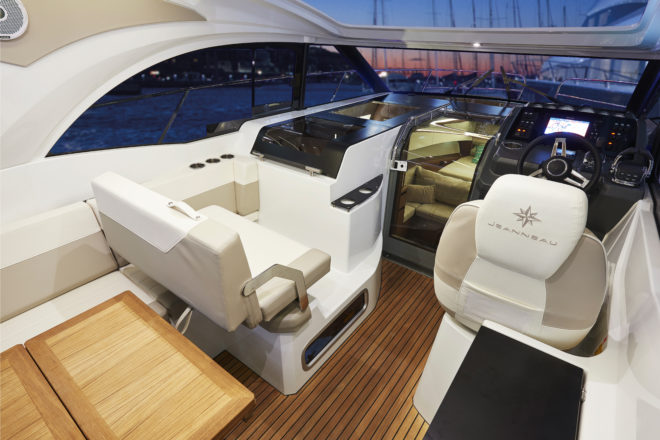 Where seating around the extendable table ends midships, a bench backrest can be simply lifted and its direction reversed to face the bow, so this spot can be conveniently used to sit and chat with the helm or to offer a good vantage point for any would-be co-pilot or navigator.

The covered main-deck areas on both boats are showered with natural light from large wraparound windows and ample ceiling skylights, which can be covered to block very bright sunshine or allow privacy. All can be opened to allow for cross-ventilation, when preferred over air-conditioning. This is particularly effective with the Leader, given its open stern.

Helm stations in both boats have simple dashboards – the Leader 33 has retro-style chrome-edged display dials – and seats that can be easily retracted if standing is preferred. The 1095 has a sliding door by the helm, so it’s just a single stride to the starboard side deck. 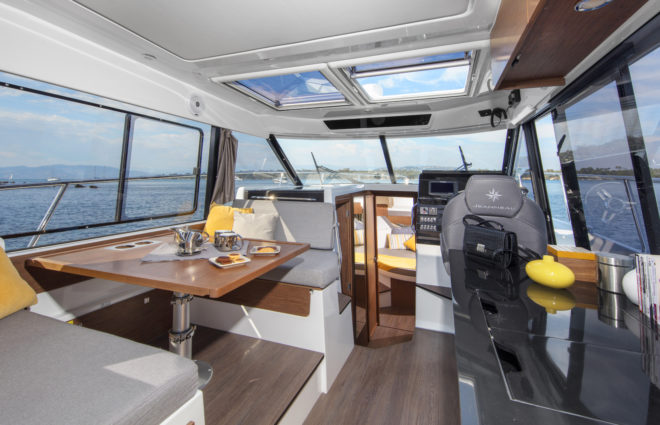 Lawrence Chow of China Pacific, Jeanneau’s distributor in Hong Kong, says: “Our customers love the size of both boats, which move around easily thanks to their bow thrusters.

“We have sold one of each model to first-time owners and they also like the layouts if they have family on board, saying there are enough areas to find their own spaces, and still keep their eye on where children are.”

CLEVER USE OF SPACE AND LIGHT

Storage spaces are ingenious on the lower deck of both the Leader 33 and Merry Fisher 1095. In the bathroom, a sizeable shaving/makeup mirror is completely concealed to seemingly flip out of nowhere. 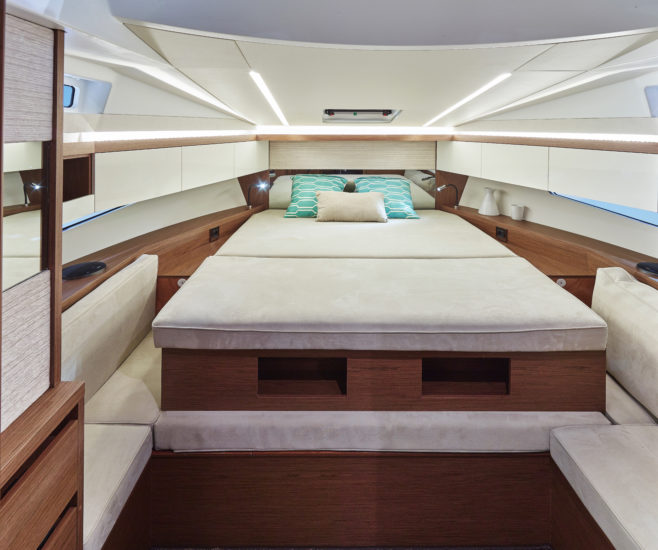 In the Leader 33, the bed in the master suite shortens to make a cosy lounge area (below) 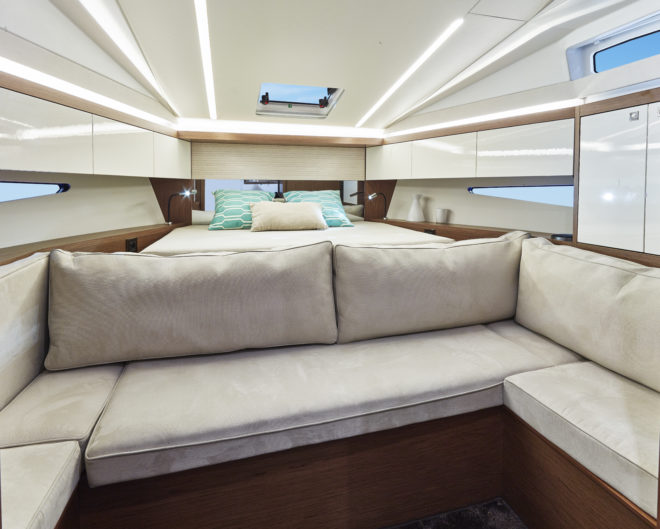 Both of these models have a spacious shower and WC, plus a signature stylish basin bowl mounted atop a deep counter. Around the ablutions rooms and galleys, every square inch is used for obvious or clever concealed storage. And in both models, optional natural lighting panels abound – used or not by attaching or removing fabric blinds via large popper closures.

Likewise, in both boats, cabins play on adaptable furnishings configured to use all space available for access around beds, and to allow impressive headroom and storage.

In the 1095’s master cabin, an oval-shaped double bed makes good use of the space in the bow, where its curved edges allow ergonomic access around either side and to overhead lockers. The Leader’s master has higher headroom over the foot of its rectangular double bed, which can morph into a lounge, with a hidden pop-up table concealed in its flooring. 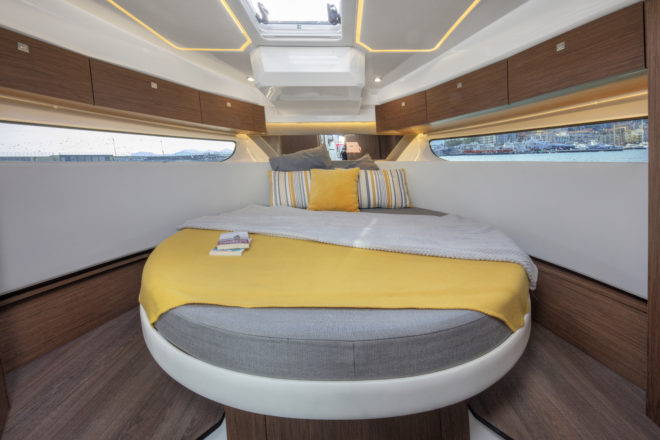 However, the Merry Fisher model may have the edge below decks as it offers the option of two or three cabins, the latter a remarkable achievement on the boat of this size.

Besides the positive response on both the Leader 33 and Merry Fisher 1095 in Hong Kong, Jeanneau’s Southeast Asian dealers also praise the appeal of both.

Nguyen Duc Thuan, President of Vietyacht, says: “These two boats are suitable in size, reasonably priced and have great performance for the Vietnamese market. Merry Fisher 1095 is in more demand than Leader 33, as it’s a slightly lower price and our clients prefer outboards for operation and maintenance.” 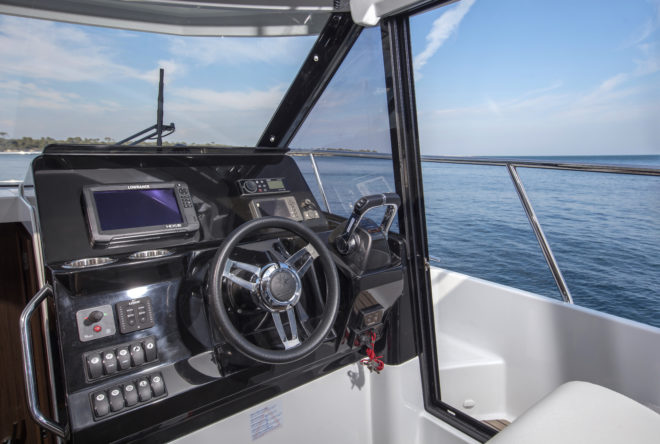 The Merry Fisher 1095’s helm station has side deck access

“Jeanneau hits the right spot when it comes to the Leader 33 and Merry Fisher 1095 and also the NC33,” he says. “They are attractive yachts, great for both beginner and experienced boaters who simply want to go out for the day and enjoy the paradise of Thailand.”

The consensus is that both models are suitable for the region, offering a clever use of space and reliable performance. The main differentiators are that the Leader 33 offers either inboard or outboard engines and an open design, while the Merry Fisher 1095 has the option of a closed saloon and two extra berths in this space.