Ferretti Yachts will complete its updated eight-model flybridge collection with the 720, which will sit in the middle of the range from the 450 to the 960.

Ferretti Yachts expects to launch its new 720 this summer before its anticipated appearance at September’s Cannes Yachting Festival, where the first unit was sold last year when its designs were unveiled. 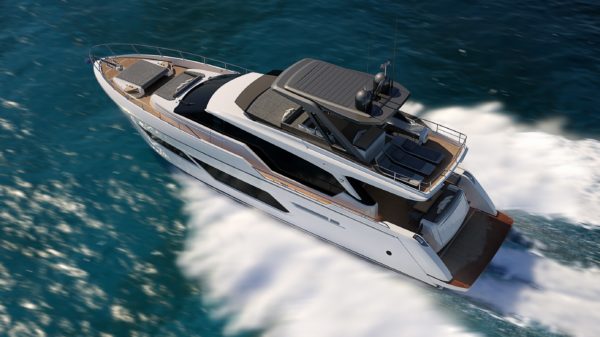 The 720 is the second Ferretti Yachts model to sport an exterior by architect Filippo Salvetti, following the 670 that debuted at Cannes last September. Salvetti worked on the 720 design in collaboration with Ferretti Group’s Product Strategy Committee and Engineering Department, while the Group’s own architects and designers handled the interior.

The aerodynamic design and sporty lines have become a signature of the Ferretti Yachts fleet, which has been overhauled over the past three years with the arrival of the 670, 780, 850 and 920.

The 720 will be as sporty as she looks, with optional MAN V12 1400mhp engines expected to produce a top speed of 32 knots and a cruising speed of 28. The standard engines will be twin MAN V8s with an output of 1200mhp. 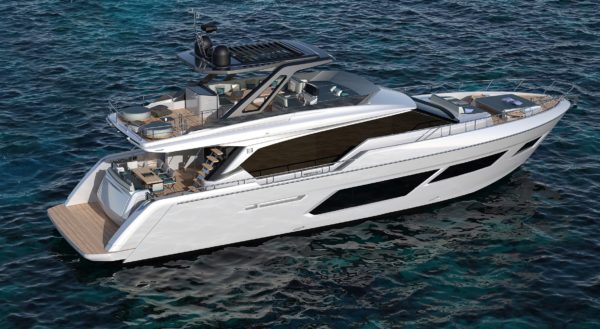 The 720 is the second Ferretti Yachts model to sport an exterior by architect Filippo Salvetti, following the 670 that debuted at Cannes last September

The foredeck stands out for its spacious, interchangeable  lounging areas, while the generous 30sqm flybridge, in carbon-fibre and composite materials, has a hardtop available in three different versions: fixed window, built-in bimini or adjustable louvres. The aft swim platform can become a terrace on the sea with convertible chaise longues and can house a 3.95m tender.

Inside, a large open-plan space is organised into three zones. The living area features two ample facing sofas and is separated from the raised dining area and open galley, while forward is the helm station.

The lower deck features a four-cabin layout. The 20sqm full-beam owner’s suite is midships, forward are two guest cabins which share a bathroom that can also double as a day head, while the VIP cabin with en-suite bathroom and separate shower is in the bow.

Like with the 670, owners can choose between two styles for the interior design, with very different furnishing solutions and colour palettes. The 720 will also be available in the exclusive Tai He Ban version conceived for the Asia-Pacific market, including a service galley on the lower deck and a round table in the dining room.

The original article appears in Yacht Style Issue 47. Email [email protected] for print subscription enquiries or subscribe to the Magzter version at: www.magzter.com/SG/Lux-Inc-Media/Yacht-Style/Fashion/