Built in the Netherlands by Oceanco, the 91.5m Equanimity in Malaysia has a guide price of US$130 million, far less than its original value in 2014. 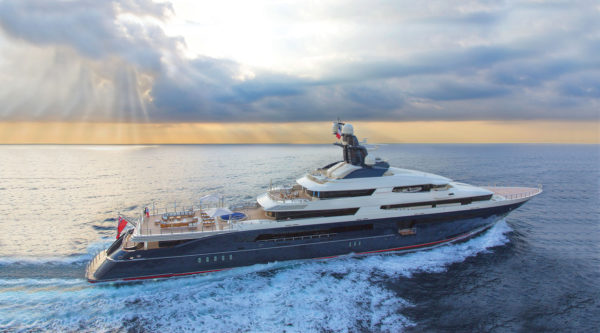 The 91.5m Equanimity is being offered for private treaty sale prior to 31 March as part of the disposal of troubled 1MDB assets.

Malaysia’s High Court has set a price guide of US$130 million on an “as is where is” basis. This is the market value assessed by the court-appointed appraiser Winterbothams, which conducted a full survey of the yacht.

Bearing in mind that the price on delivery from leading Netherlands builder Oceanco in 2014 was probably more like US$200 million, this represents an attractive opportunity to own a large sail-away superyacht whose interiors are outfitted in modern Asian woods, bamboo, marble and gold leaf.

“This first phase was needed in Admiralty Law to provide due publicity and the subsequent buyer of the yacht with an internationally-recognised clean and clear ownership title,” said a Burgess spokesman. 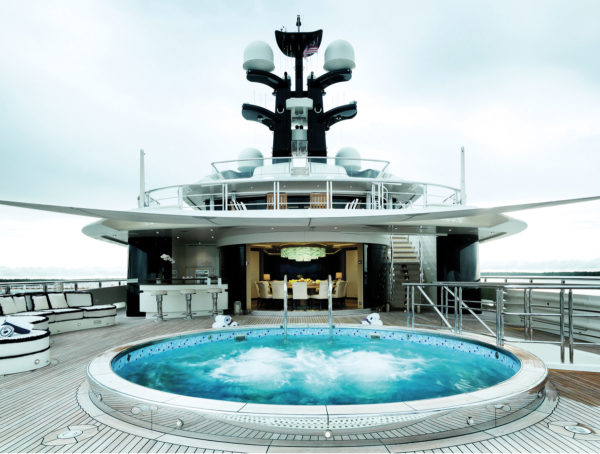 “Burgess remains central agent for the second phase, which largely follows industry standard private treaty protocol, allowing potential buyers to visit the yacht, submit offers via Burgess, and for the High Court to reject, negotiate or accept such offers. Detailed information and copies of the survey are available on request.”

At 2,998GT, Equanimity was built to comply with the Passenger Yacht Code and can accommodate 18-22 guests in 9-11 cabins. Only two such PYC yachts are presently available for sale.

One owner’s suite with study can convert into a second double, and there is a VVIP and three VIP cabins, one of which can convert into a fourth double cabin, plus two further double and two twin cabins, in addition to 31 crew in 17 cabins.

Her interior is by Winch Design. Amenities include an impressive beach club and health centre with gym, massage room, sauna, hammam, plunge pool and beauty salon. There is also a hospital, helipad certified for an Airbus EC 135 or equivalent, two 10.5m Hodgdon tenders, and large circular swimming pool.

It is rare for auctions and sales like this to take place in the superyacht world, but it has happened previously with the smaller Lürssen 67m Apoise and 50m Delta Triton, and again when prominent Indian businessman Vijay Mallya was judged to have abandoned his 95m Indian Princess in Malta in 2017.

I was coincidentally at Oceanco’s yard in Alblasserdam near Rotterdam in the late 1990s when Richard Hein was building Indian Princess, originally as Al Mirqab for the Qatar royal family, and again in 2014 as Equanimity was handed over.

Back then, when the online site Superyachtfan named Jho Low as Equanimity’s owner, his lawyers wrote to deny it, but the vessel would soon arrive in Asia-Pacific waters via an Arctic passage to South Korea. She has been here ever since, roaming from Hong Kong to East Australian ports, and more recently hanging out in Phuket, Sihanoukville on the Cambodian coast of the Gulf of Thailand, and Bali, before her arrest over the 1MDB affair. 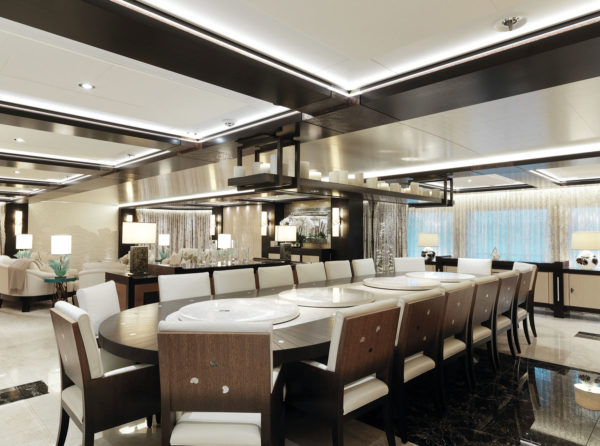 The yacht offers formal dining for up to 18 guests

The latter says that Jho Low’s involvement in borrowing, chartering and buying superyachts was by no means limited to Equanimity. Starting on his family’s home island of Penang, Jho Low was apparently to be found aboard the 48m Lady Orient, which is Brian Chang’s Japanese-built ex-Asean Lady and a pioneer of superyachting in Southeast Asia.

Then in 2009 came the charter of his first Oceanco vessel, the 81m Alfa Nero, in the Med for a series of high-level meetings over a week, followed by the 134m Fincantieri Serene and more often the 147m Lürssen Topaz, while his Goldman Sachs advisor Tim Leissner acquired the 52m Benetti Sai Ram. 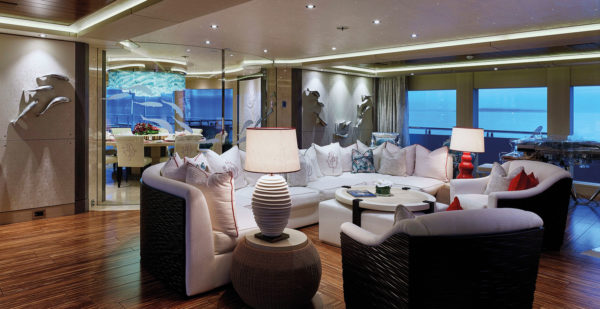 One of the yacht’s Asian-themed lounges

At the deadline for Yacht Style 45 (in which this article first appeared), Low remained a fugitive from arrest warrants taken out in Singapore and Malaysia.

Whether this colourful tale, still unfolding, will affect the Equanimity sale is hard to tell, but as it seems Low has made no further claims on the vessel within required time periods, and no other claimants have come forward, the Malaysian Attorney-General and very experienced maritime lawyers are satisfied that “clean and clear” title can be offered.

An initial case brought by the US Department of Justice has been withdrawn, so there are now no legally valid claims left on the yacht other than that of the Malaysian Government. According to the Burgess spokesman, the Malaysian High Court’s Legal Team has ample evidence available that any resale and related ownership title will be recognised by Admiralty Courts worldwide.

Dealing with the yacht’s present condition, he also clarified that the yacht is still maintained by an experienced crew, overseen by a specialist yacht management company, and further quoted the Winterbothams survey: “She has been extensively used since delivery, with very little downtime, which now shows in her overall condition. That being said, she has been well-built, has a solid platform, and as such, with a reasonably small investment, and some downtime, we would expect her condition to improve dramatically.”