Beneteau is among a huge range of French builders – many of them part of the Beneteau Group – staging multiple world premieres at the Cannes Yachting Festival. The iconic builder’s new models at the motorboat display in Vieux Port include the Monte Carlo 52, designed by Carlo Nuvolari and Dan Lenard, with an interior by Andreani Design. 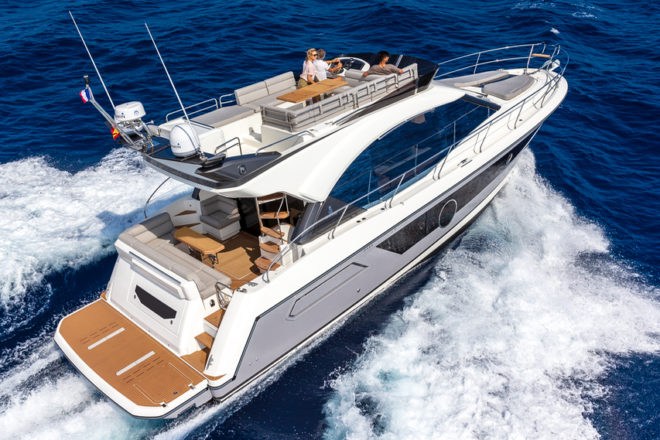 At 16.25m (53ft 4in), the Monte Carlo 52 is longer than the Monte Carlo 5 she succeeds, as well as wider, with a beam of 4.6m (15ft 1in). The V-hull, designed in partnership with Micad, has helped create a larger saloon, which features a minimalist décor of light woodwork and linings.

Huge saloon windows create a bright interior, while the open aft galley connects well with the cockpit once the doors are open. The lower deck features a full-beam owner’s suite with en-suite midships, a guest cabin and a VIP in the bow, and a shared bathroom, while there’s also the option of a crew cabin aft.

Beneteau’s other premieres includes the Swift Trawler 41, which is available in either Fly or Sedan versions, and sits in the middle of a series of passage-makers ranging from 30-50ft.

The 41 has a 12.5m hull and is 13.4m overall, with a 4.2m beam. The cockpit has an L-shaped sofa, while the interior features an aft galley, a C-shaped sofa and a dining table. The helm bench seat rotates 90 degrees, allowing eight passengers to sit down for dinner or socialising. 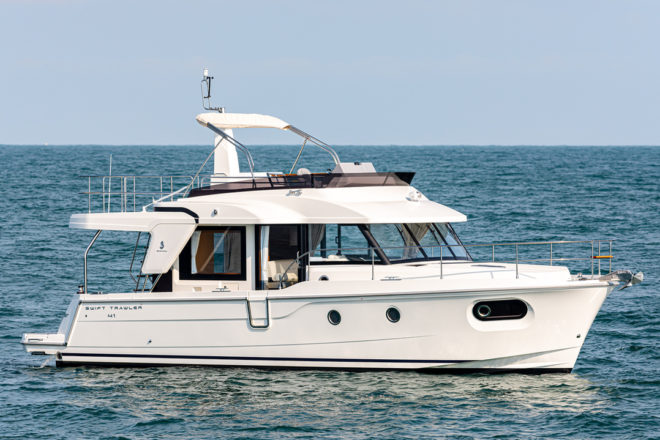 The sofa and table can convert to a double berth, while there are three cabins below: a master in the bow, a double and a single. The foredeck has a large sunpad and a high, protective pulpit, while the Fly version has a good flybridge, with a helm station, L-shaped sofa, table, second sofa, wet bar and open space aft.

Beneteau has also released the Gran Turismo 32, which is the entry-level model for the series and will be joined next spring by the 36, sitting below the existing 40, 46 and 50 models. The GT 32 is available with inboards or outboards, and is based on layout of the Flyer 10, with an Airstep hull.

Prestige features three world premieres at Cannes, including the 420, the smallest model in its Flybridge range of sports boats. 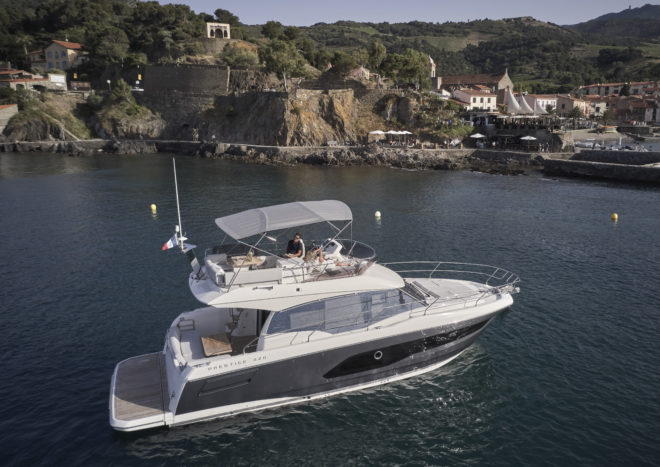 The 420 has an L-shaped sofa and a table in the cockpit, while the saloon features an aft galley, a C-shaped sofa with dining table – which can become a double berth – and a two-seat sofa to starboard. The lower deck has a full-beam master suite midships, a VIP double in the bow and the choice of one or two bathrooms.

The large flybridge has a full helm station to port, a large lounging area forward, a galley, and an L-shaped sofa aft with a dining table. The foredeck has three adjustable sunpads, while aft is a hydraulic swim platform with access to a large storage area for toys. The 420S has a large opening sunroof instead of a flybridge.

Prestige’s other world premiere at Cannes is the 590S, which is the sports version of the excellent 590 (see Review later in this issue). Instead of the 590’s flybridge, the S version features a smaller flybridge aft of a large, electrically controlled opening sunroof. 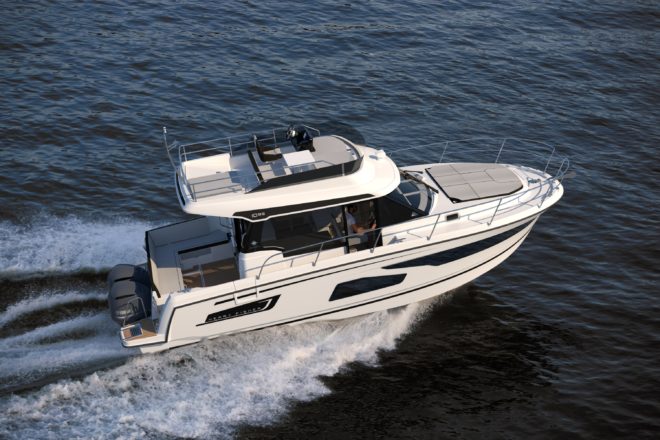 Jeanneau has introduced the Fly version of its Merry Fisher 1095

Jeanneau is staging the world premiere in Vieux Port of its Merry Fisher 1095 Fly. Almost 33ft in length, the Merry Fisher 1095 was among the first of its size to use outboard engines and also boasts three lower-deck cabins. The model is now available with an impressive flybridge with a portside helm station, forward sunpad, table and a co-pilot bench seat that can fold down to extend the aft sunpad. There’s also the option of a bimini.

Lagoon is releasing its Sixty 7 power catamaran in Vieux Port, while the brand’s sailing catamarans berth in Port Canto. The motor yacht follows the Seventy8 that premiered at Cannes last year and features an exterior by Patrick le Quement, an interior by Italy’s Nauta Design and naval architecture by VPLP Design (Marc Van Peteghem and Vincent Lauriot-Prevost). 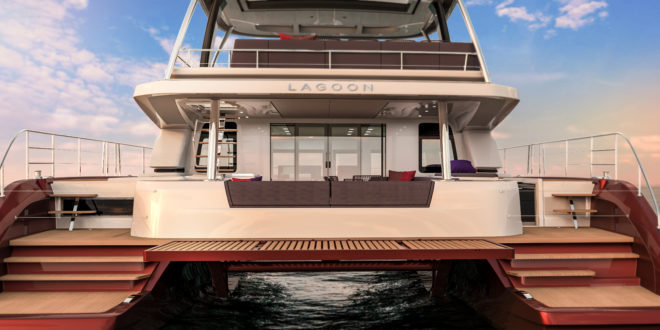 Sunreef is not French, even if its founder Francis Lapp is, yet the Polish yard’s 80 Sunreef Power is one of the most eagerly awaited premieres of 2019, with a hull already ordered by Spanish tennis legend Rafa Nadal.

The enormous model, which follows the premiere of the Sunreef 80 sailing catamaran at Cannes last year, measures 78ft 7in in length and has a beam of 39ft 4in. Like most Sunreefs, it offers a huge range of options for decor, hull colours and interior layouts, including a large range of accommodation choices in the hulls.

The huge, full-beam bow terrace is accessible from the saloon, while the immense flybridge can house a spa pool as well as multiple social areas. Designed for long-range cruising, the yacht is fitted with twin 1,200hp engines, while the massive garage and aft platform can combine to accommodate a dinghy, jetski and water toys. 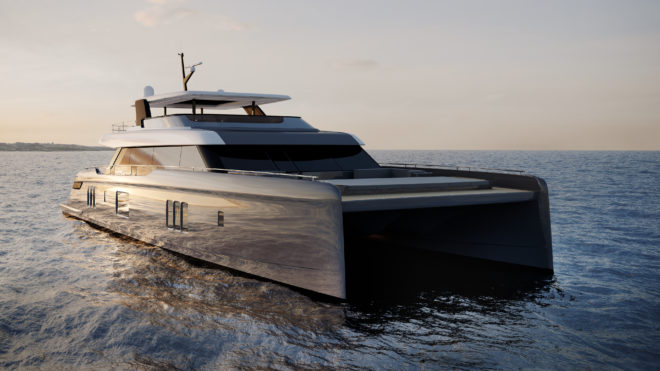 Rafa Nadal is among the first buyers of the 80 Sunreef Power, premiered a year after the Sunreef 80 sailing catamaran starred at Cannes last September

Nautor’s Swan started the year by unveiling the Swan 65 at Boot Dusseldorf and has now added the Swan 48, the second of that name designed by German Frers, and the third iteration of a model that first appeared in 1971. Today, the Swan 48 is the smallest in the range of Swan Yachts, which is led by the 78 launched last year.

The three-cabin 48 is one of the major premieres in Port Canto – location of all sailboats at this year’s Cannes Yachting Festival – and is also exhibiting at the shows in Southampton, Genoa and Annapolis. At least 17 units had been sold by the time hull one was being trialled over the summer, when it showed the word-class design, build quality and finish that the Finnish yard is renowned for (see Review later in this issue). 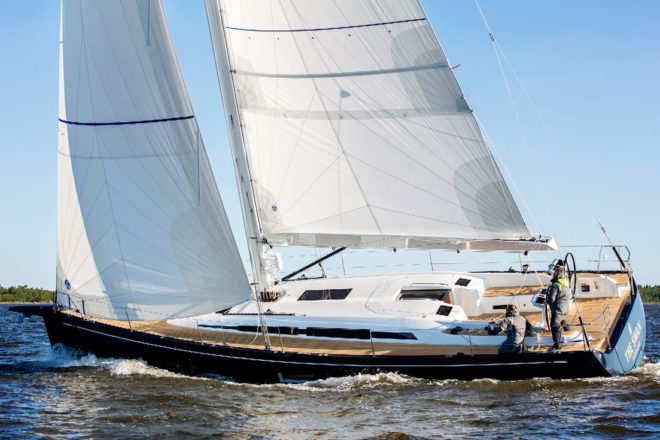 Designed by the legendary German Frers, the Swan 48 is the smallest model in the Finnish builder’s Swan Yachts range

Beneteau is launching a brand-new range with its First Yacht 53, a model that’s also showing in Genoa, Barcelona and Annapolis. Sitting above the First range from 14-27ft, the First Yacht was two years in development and features a hull by Roberto Biscontini, a long-time designer of America’s Cup boats, and an interior and exterior by Lorenzo Argento.

Beneteau says two people can handle the 17m yacht, which features a full plumb bow, twin rudders, a 2.5m or 3m draught, and a garage that houses a 2.4m (8ft) tender. The interior has a dining table for four or five, an L-shaped sofa and coffee table, three guest cabins – with owner forward – and two or three heads.

Jeanneau, meanwhile, is staging the world premiere of its Sun Fast 3300, after several prototypes were tested during the year, including in the Rolex Fastnet Race in August. The 33ft production racer succeeds the popular 3200, which sold 250 units since 2007. 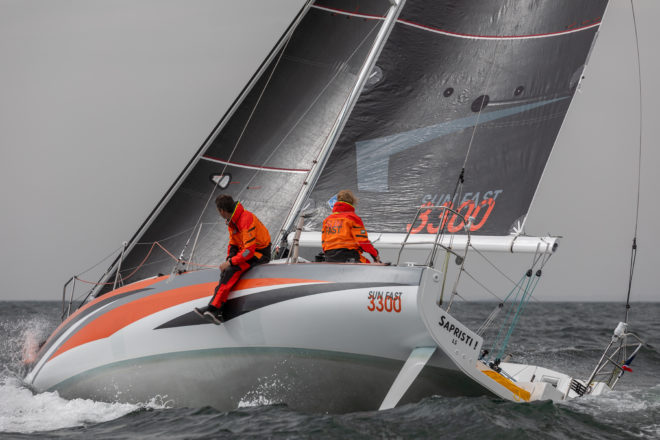 Daniel Andrieu, who worked on the 3200 and 3600, is responsible for design along with Guillaume Verdier, who has worked on advanced projects including Emirates New Zealand’s America’s Cup-winning cat from 2017. The yacht is constructed by infusion-moulding, so is light and rigid, with a light, powerful hull, twin rudders and straight keel. The yacht can be adapted to single-handed, double-handed or fully crewed racing.

Jeanneau is also offering a new swing keel on its Sun Odyssey 410, which the French builder says is ‘the only 40ft cruising sailboat equipped with this system, which was until now reserved for race boats”. 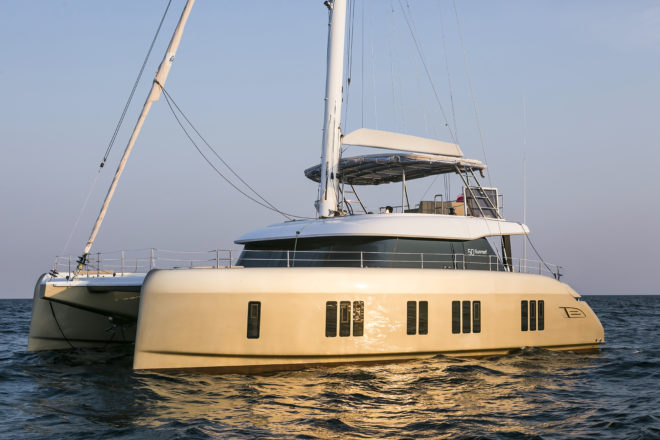 Sunreef is staging the world premiere of its Sunreef 50, the smallest model in the Polish builder’s new range of sailing catamarans, which includes the 80 premiered at Cannes last year and the 60, and will be joined by the 70.

The brand is also unveiling an Eco-Electric version of the 60. The Sunreef 60 E features fully electric propulsion and an energy-management system for more economic cruising.