Beneteau is flexing its muscles strongly with a raft of new models, a revitalisation of its famous performance First range and the reinvention of its best-selling Oceanis cruisers, which also now include the 51.1. 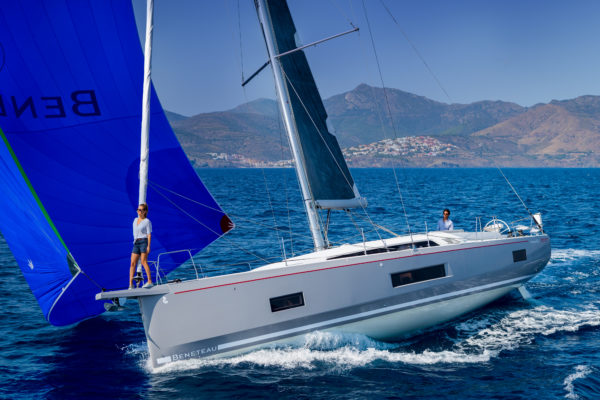 The Beneteau Oceanis 46.1 is a stunningly sleek design

One casualty in all this is the ending of the luxury Sense range, which had a relatively short life of eight years.

However, this is good news for Oceanis fans who will experience a raft of new models and a flagship range-topping Oceanis Yacht brand, as General Manager Gianguido Girotti told me during a chat at the world premiere of the Oceanis 46.1 in Sydney.

“The 46.1 and 51.1 are fast-cruisers with performance options and deep lead keels so these seventh-generation Oceanis offer more than the previous editions,” said the Italian, who has been with the French boating giant since 2015, initially as Director of Sail Product Marketing.

A walk-through of these models showed slick design with clever accessories such as retractable davits, while also claiming the largest owner’s forecabin in the market for the 46.1, plus better stability because of lead options instead of cast iron in the keels.

Cruise boats, however, are predominantly about comfortable sailing so Beneteau has continued with a strong emphasis on this, with items like the swing-out transom barbecue and large cockpit table with coolbox.

Naval architect Pascal Conq has been a regular collaborator on recent Oceanis so the 46.1 reflects the evolution of his thinking, which initially moved the sail plan further aft to balance the boat better and now comes with a higher level of options to create a performance-cruiser.

Externally the aesthetics are contemporary as the large hull volume allows for a flush deck with only the semi-raised saloon to interrupt the flow of the topsides. This sleek profile is often found on premium performance cruisers, so makes a bold statement about the 46.1’s abilities. 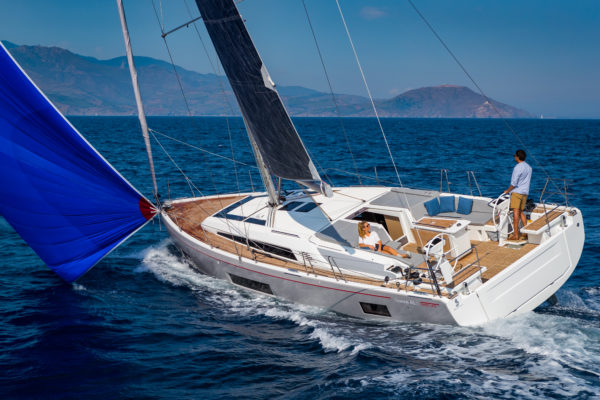 Bluewater cruisers seeking protection in the cockpit may not agree, although there’s a slot for a sprayhood which would be essential offshore. Also available is Beneteau’s fibreglass arch which controls the boom as well as creating a sturdy sprayhood, but means the mainsail is higher.

Looking around the cockpit, the most striking feature is lots of flat, teak-clad surfaces – in the cockpit and saloon top for lounging – while all sail controls are separated aft beside the twin binnacles.

Sail controls are reasonably simple, with two pairs of Harken Performa electric winches on the coaming beside each binnacle. These are the primaries and control the German mainsheet, along with jammers for all halyards on each side; ideal for short-handed, but a bit cramped for race crew.

The large teak table with grab rails is handy for bracing, as are the handles on the binnacles. The voluminous rope bins on each are a welcome feature.

Another race feature at the binnacles are the lifting footplates, something I found useful as the angle of heal increased with our review boat’s performance sail plan. Space between the binnacles easily allows crew passing between to the electric fold-down transom swim platform.

Other good features at the binnacles include a prominent compass on each while electronics are from B&G, with an easily readable seven-inch Zeus plotter on each side, and engine controls to starboard. 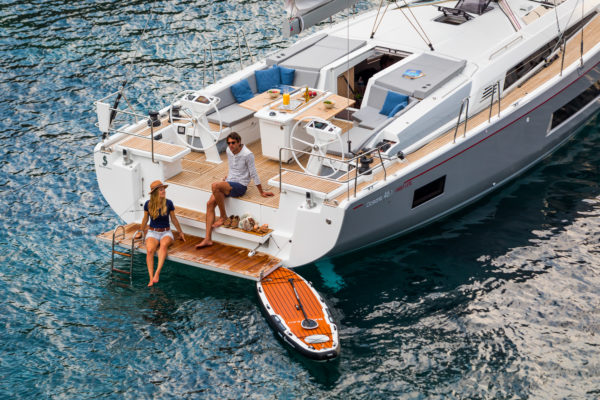 Halyard control was done with an electric H40.2ST with rotating off-switch to prevent inadvertent use while a larger H46.2ST sheets the genoa. Underfoot, the optional teak cladding hides a central main hatch giving access to the shafts for the twin rudders for emergency steering, while on each quarter are deep lazarettes.

Walking forward, the GRP decks – designed by Nauta – give good grip underfoot while outboard shrouds clear the way to the wide foredeck, an ideal sunbathing area at anchor.

The anchor set-up uses a smallish Quick vertical windlass, with single bow roller running through the GRP beak (an integrated bowsprit). Other good features on the deck include midship cleats and an integrated GRP toerail. The optional bowsprit ensured the Code 0 was well clear of the forestay, so is a worthwhile option.

Entering the saloon, the first major plus I found was traditional washboards on the main hatch, Beneteau at last ditching the saloon-door style entrance for a more seaworthy approach. There can be up to five cabins and four bathrooms down below, so the Oceanis 46.1 should have wide appeal including to charter companies.

Alternatively, a cruising couple might opt for the three-cabin version and use one aft berth as a storage locker. In all layouts, the owner’s berth is forward, where a second bathroom can be included. Our review boat, hull number two, came with three cabins and two bathrooms, with the owner’s en- suite forward.

The interior by Nauta Design has a fairly modern look and feel, yet with a very practical, user-friendly layout. Call me old fashioned, but I generally prefer a more seagoing layout that offers plenty of support rather than an open-plan arrangement.

As such, the 46.1 gets a tick of approval for the U-shaped dinette with table and separate compression post for hand support, while overhead are more longitudinal grab rails.

The galley on the aft port side and bathroom opposite means the navigation station is relegated to the forward bulkhead, which requires the skipper to swivel around and stand up to check the cockpit. 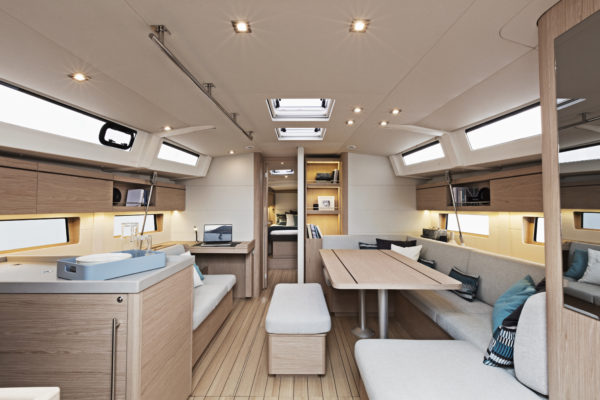 The spacious interior allows for an entire crew around the dinette, while natural light comes from an abundance of portlights and skylights

Traditionalists will say it’s too far from the companionway, but it does give a bulkhead for instruments and is beside a large, rectangular portlight window. This location, instead of a sliding midships one as on older models, means the dinette is freed up for crew to enjoy both sides of the table when the central bench is moved out.

Another welcome return is traditional overhead lockers throughout, including in the galley. The U-shaped galley has Corian worktops, sensibly deep fiddles and ample cupboard space. Other good points are the energy- saving chest fridge, dual sinks and gimballed gas oven/cooktop.

Overhead, an optional Whirlpool microwave sat in one cupboard (and can be powered by shore power or generator) and an optional workbench- cupboard was also fitted to enhance the storage.

In terms of quality, the standard of fixtures and fittings throughout was good, while precision CNC machining ensured all joinery neatly fitted together. The finish was darkish Mahogany Alpi, but a lighter version is also available.

The boat’s three-cabin layout had the fairly standard two doubles aft, with a tall cupboard in each, ample opening hatches and that useful side access to the engine house.

Forward, the owner’s berth enjoys relative seclusion with its en-suite bathroom. Here, the benefits of the scow bow created by Conq come in the form of massive volume and that industry-leading room size.

This not only allows for a large island bed but also gives space around its base for bench seating each side plus storage beneath – despite the bow thruster installation – so creating a very liveable space.

This is further enhanced when I check the ablutions and find the head and shower are two separate rooms on each side of the hull. In both, a moulded floor is easily cleaned and the head is electric, plus there’s hatch ventilation. Other good features include twin skylights and portlights that improve the airiness, and there’s space on the aft bulkhead for a television. 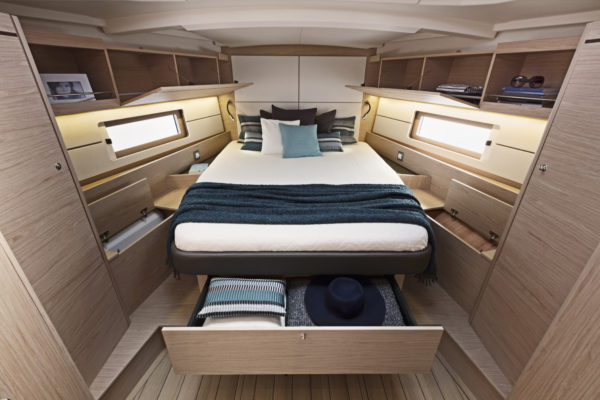 The owner’s berth forward has separate rooms for shower and toilet; a benefit of the voluminous scow bow design from naval architect Pascal Conq

Ducts for the optional air-conditioning are another good comfort feature and there’s space behind the engine for the optional 7.5kVA generator. The engine is revealed upon lifting up the companionway steps where the four- cylinder Yanmar 47hp sail drive – there’s also an 80hp option – sits fairly high above the bilges.

Front access to the main service points – impeller, oilways and filters – is good, and the starting battery is nearby in the port cabin, along with two house batteries and the main switches. The saildrive gearbox on our boat came with a three-bladed folding propeller, something essential for competitive twilight racing, rather than the standard fixed model.

Beneath the engine revealed a smooth hull layup, which benefits from being a fairly traditional monolithic polyester layup – so no foam that can be compromised – while the deck is laminated to give heat insulation.

Displacement is about the same as older models, at 10,597kg for the 46.1 versus 10,565kg for the Oceanis 46 in 2006. However, the shape has been broadened aft and given a fuller bow for better off-the-wind performance.

Hull rigidity comes from a moulded grid and the hard chines, along with internal stringers. The twin rudders are required to control the hull’s wide beam that runs right back to the transom, and the rudder shafts are stainless.

A major option with this seventh generation of Oceanis is the lead bulb-keel option, which enhances stiffness and allows a greater sail area to be carried upwind.

In terms of sails, the area of the mainsail and the genoa are the same to balance the overall sail plan. For cruising sailors, this also has the advantage of offering a more balanced helm and thus less amps consumed on your autopilot.

The self-tacking track for a jib is another good cruising feature, allowing a cutter-style rig which is ideal for short-handed sailing. Reefing on the main was done with single line and the sail was easily controlled by the optional lazyjacks with the low boom height particularly welcome.

The Z-Spars rig had the metre-longer performance alloy mast with racing North 3DI sails bent on. Some other notable features were the wire standing rigging that had large chainplates through the deck into the hull grid, while the backstay was hydraulic.

Yacht handling can be fraught, so the owner of our review boat had a drop-down bow thruster fitted, which we used to ease ourselves out of the tight marina berth, before accelerating smoothly to a cruising speed of 7.4 knots with the 47hp engine at 2,200rpm as we reached open water. 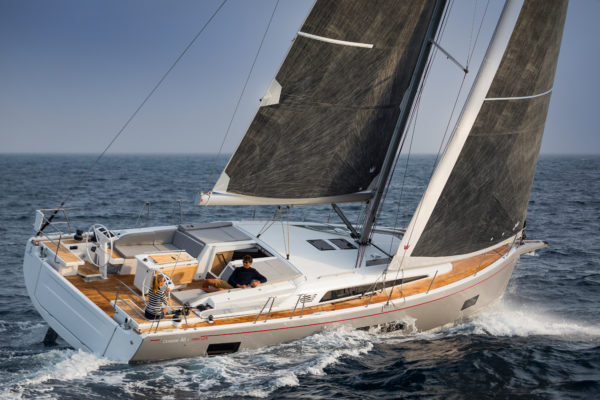 The performance of the Oceanis 46.1 matches its user-friendly layout

A windy day with gusts is an ideal way to test a performance cruiser as the boat requires constant adjustment, so my time at the helm of the Oceanis 46.1 was thrilling.

With genoa fully unwound and the electric Harken winch quickly hoisting the carbon mainsail, the boat was fully loaded as the 20-knot gusts blew off the nearby hills along the Sydney coastline. At the composite wheel and comfortably seated on the teak coaming, I required only a light touch to control the 46.1.

Even in the gusts, the weather helm proved just about right as we slowly rounded up then bore away in the calms as the deep lead bulb keel drove us close to windward (about 25 degrees). Boat speed was an impressive eight knots in the 13-knot breeze, rising to 9.8 as the gusts hit.

Razor-sharp tacking followed as the flat-panelled North Sails genoa snapped across and was quickly skirted by my crewmate. Walking easily between the helms and sitting out far enough to see the tell-tales go horizontal confirmed the good overall ergonomics of the 46.1’s steering set-up.

Off the wind, another pleasant surprise awaited because the wide hull maintained its speed when running at 170 degrees. This bode well for when a Code O could be hoisted off the bowsprit, allowing the stepped hull to lift in the water and accelerate downwind.

Cruising sailors will also benefit from this efficient hull, which made me conclude that this Oceanis 46.1 is indeed a pleasurable performer.